"I believe the future of communication will increasingly shift to private, encrypted services where people can be confident what they say to each other stays secure and their messages and content won't stick around forever," Facebook (NASDAQ:FB) CEO Mark Zuckerberg wrote in a lengthy blog post last week detailing where he sees the social networking giant's "privacy-focused" future. The missive comes after Facebook has grappled with countless privacy and data use scandals over the past few years, and at face value represents a massive shift in direction for the company. 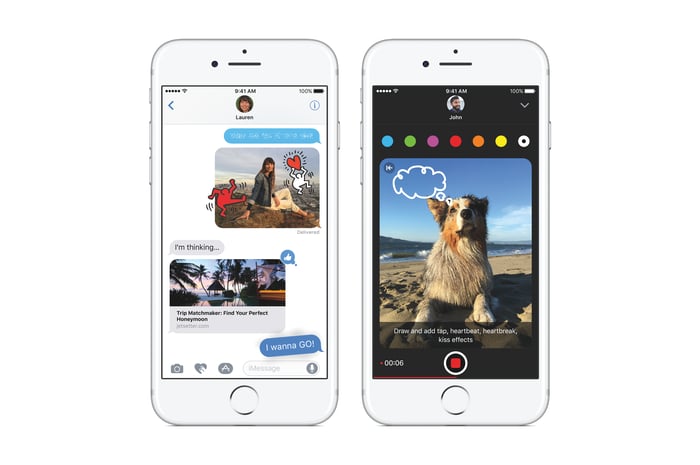 iMessage is a huge threat to Facebook. Image source: Apple.

As Facebook's growth has slowed in recent quarters, the company is turning to messaging as its next frontier. "Today we already see that private messaging, ephemeral stories, and small groups are by far the fastest growing areas of online communication," Zuckerberg wrote. Facebook had already made a massive bet on messaging with its 2014 acquisition of WhatsApp, its largest to date. But Facebook has struggled to ramp up WhatsApp monetization, which it needs to do in order to justify the exorbitant premium it paid.

At the same time, Facebook is planning on unifying all of its various messaging services -- Messenger, WhatsApp, Instagram Direct -- a move that His Zuckness confirmed was in the works on the January earnings call. Integrating all of those messaging services together "is going to be a long-term project" that would likely be rolled out in 2020 or later.

It's also worth remembering that in October, Zuckerberg stated that "our biggest competitor by far is iMessage." In markets where the iPhone has strong share of the smartphone installed base -- most notably the U.S. -- Facebook faces an uphill battle with getting consumers onto any of its messaging services since iMessage is bundled as the default texting app. "In countries where there's more competition between iOS and Android like much of Europe, people tend to prefer our services," Zuckerberg added.

Check out the latest earnings call transcript for Apple and Facebook.

The case for iMessage on Android

Zuckerberg basically just made a strong case for Apple to bring iMessage to Android. Alphabet subsidiary Google has never had a cohesive messaging strategy, which presented an opportunity for companies like Facebook.

In recent years, Apple has become increasingly open to cross-platform support in its bid to grow its services segment. The Mac maker has mostly focused on bringing Apple Music to other platforms. It has long been available on Android and just added support for Amazon's Alexa in December.

While messaging services are notoriously difficult to monetize, Apple has been taking cues from China's Tencent and its WeChat platform. iMessage now includes Business Chat, connecting consumers to companies for a fee, which is one way Facebook hopes to monetize messaging. There are peer-to-peer (P2P) payments, which don't generate revenue for Apple but do promote Apple Pay adoption and brand recognition. iMessage has even become an extension of the App Store; users can buy messaging stickers and other personalization items.

Apple should bring iMessage to Android, which would help grow its services business and potentially coax users into switching to iOS, all while undermining Facebook's newfound focus on privacy.