Please ensure Javascript is enabled for purposes of website accessibility
Log In Help Join The Motley Fool
Free Article Join Over 1 Million Premium Members And Get More In-Depth Stock Guidance and Research
By Lou Whiteman - Jun 9, 2021 at 11:36AM

The company is reportedly prepping a freighter version of its A350.

Airbus (EADSY 0.32%) is said to be prepping a freighter version of its A350 commercial aircraft, a fresh attempt to challenge Boeing's (BA 0.52%) long-running dominance in the cargo side of the business.

Airbus is in talks with more than a dozen potential customers including U.S. heavyweights United Parcel Service and FedEx and will request official board authorization to market the plane in the coming weeks should it get enough commitments, according to a Bloomberg report. If all goes to plan, the program could officially launch before year's end. 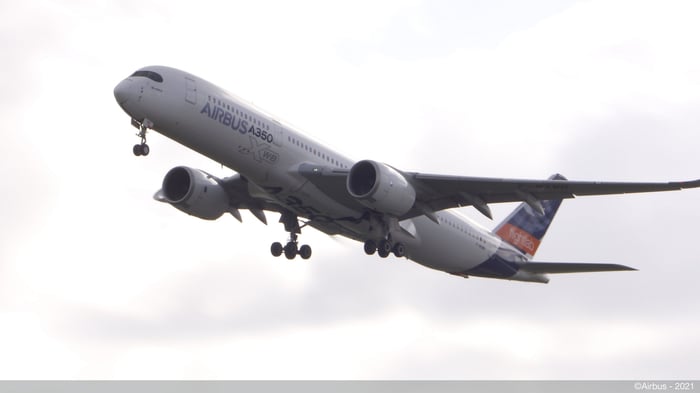 An Airbus A350. Image source: Airbus.

Boeing has long marketed cargo versions of its 747, 767, and 777 commercial planes, and according to Bloomberg data has delivered more than 400 freighters since 2010. The company has used cargo jets to help keep assembly lines running during periods of low demand for large jets, and in the case of the 747, the cargo versions at times can prop up a platform that has fallen out of favor with airline customers.

Airbus has offered a cargo version of its smaller A330 since 2010, but has generated just a few dozen sales. It previously marketed a freighter version of its two-story A380 but did not find a receptive audience.

Cargo planes tend to remain in service for longer than their passenger counterparts, and some retired passenger jets are modified and used for cargo service. With customers favoring maintenance and spare-parts simplicity, Airbus is likely to face headwinds when trying to crack the market. But large customers could be drawn to helping establish a viable competitor in the market.

Boeing sees demand for 2,430 freighter planes over the next 20 years, with more than half of that expected to be filled by passenger conversions.