Please ensure Javascript is enabled for purposes of website accessibility
Log In Help Join The Motley Fool
Free Article Join Over 1 Million Premium Members And Get More In-Depth Stock Guidance and Research
By Will Healy – Jun 9, 2021 at 6:35AM

These social media stocks are competing for more than "likes."

Pinterest (PINS 1.90%) and Snap (SNAP -1.82%) continue to challenge Facebook (META 0.23%) for the attention of social media users. Between Pinterest's "pins" and Snap's camera features, each site has attracted strong followings among specific demographics. Nonetheless, while both companies appear poised for continued growth, the overall business and financials point to a clear advantage for one media stock. 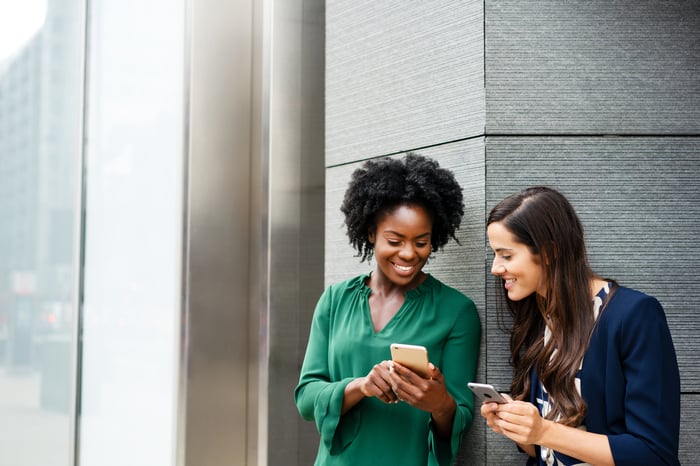 A closer look at the businesses

Despite their prominent roles in the social media space, Pinterest and Snap have approached the medium in radically different ways.

Pinterest has become a center for ideas. Those looking for a recipe, vacation idea, or any other hint of inspiration will browse the pins featured on a specific topic and pin the ones they like to their own personal boards. This works well from a marketing standpoint, as it allows vendors to sell products that can turn ideas into reality. Additionally, it gives Pinterest a competitive advantage as it links customers to ads based on inspiration. No other social media site relies on personal passions to drive ad postings.

The platform initially attracted women, and they still make up about 60% of its global audience. However, men have increasingly embraced the platform, helping the user base rise to 478 million monthly active users (MAUs). This number includes 45% of Americans who reside in households that earn over $100,000 per year.

Unlike Pinterest, Snap focuses heavily on photography and video, with its Snapchat filters adding an element of fun. Like most social media platforms, it drives its revenue from ad sales. Nonetheless, Snap has increased interest in the site by adding proprietary content, making it a more formidable competitor to Facebook's Instagram. It has also gone into direct competition with Facebook's Oculus by marketing Spectacles, its augmented reality (AR) glasses brand.

Still, this means Snap competes more directly with both Instagram and Facebook. In many cases, both sites also copied Snap's stories feature in hopes of gaining an advantage.

This did not stop Snap from developing a user base of 280 million daily active users (DAUs). A study by Oberlo found that 59% of all U.S. internet users between the ages of 13 and 24 use Snapchat, making it more popular than Instagram among this age group.

However, that number falls to just under 22% among 25- to 34-year-olds. Also, the 50-and-above cohort makes up only 4% of Snapchat's user base. This gives Pinterest a presumed edge, as teens and young adults rarely earn high incomes.

Amid competitive challenges, both companies continue to deliver impressive revenue increases, even amid continuing losses. In the first quarter of 2021, Pinterest's revenue surged by 78% from year-ago levels to $485 million. For Q2 the company also projects a 105% revenue spike compared with the second quarter of 2020, but declined to offer any full-year projections.

Snap increased revenue 66% during that period to $770 million. For Q2, it forecasts an 85% increase in revenue from year-ago levels. Like Pinterest, it did not make any predictions beyond Q2 as the U.S.'s emergence from the pandemic will probably lead to users spending less time online.

However, the determining factor between the two might come down to average revenue per user (ARPU). During Q1, Pinterest reported an ARPU of $1.04, up 34% from the year-ago quarter. The U.S. drove the majority of revenue with a $3.99 ARPU. While international yielded an ARPU of just $0.26, that metric grew by 91% year over year.

Snap has outperformed Pinterest from an ARPU standpoint despite its lower-income demographics. Snap reported an ARPU of $2.74 during the quarter, a 36% surge from Q1 2020. Its ARPU came in at $5.94 for North America, $1.48 for Europe, and $0.93 for the rest of the world. Nonetheless, North America remained the best-performing segment, increasing by 66% compared with the year-ago quarter. The rest of the world fell 7% over the same period.

Despite that difference, Pinterest and Snap stocks performed similarly over the last year. Pinterest surged 210% during that time, while Snap increased by 195%. However, Pinterest remains the cheaper stock. It sells for 21 times sales versus the 31 price-to-sales (P/S) ratio of Snap. Interestingly, both multiples surged by approximately 115% over the last 12 months, making Snap the more expensive stock. 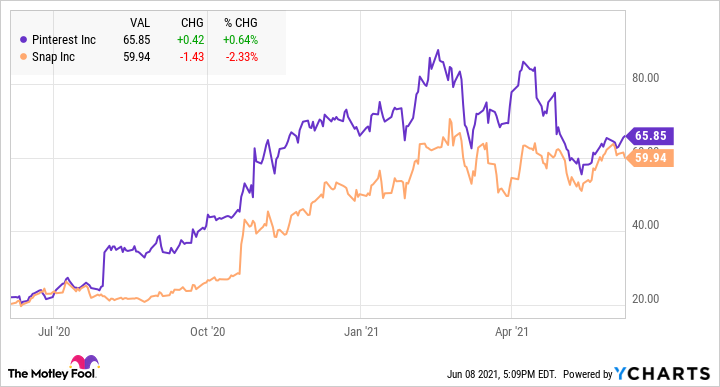 Despite Snap's higher ARPU, Pinterest probably holds more potential for investor returns. While valuation plays a part, Pinterest has become a favorite social media stock by aligning value creation with inspiration. This makes it likely the following with higher-income individuals will lead to higher ARPU over time. Also, with Pinterest's low-yielding but fast-growing international business, it holds more potential for investors.

In contrast, Snap continues to struggle with attracting users over 24 years of age. That leaves investors with few reasons to pay a significantly higher sales multiple.