Please ensure Javascript is enabled for purposes of website accessibility
Log In Help Join The Motley Fool
Free Article Join Over 1 Million Premium Members And Get More In-Depth Stock Guidance and Research
By Zhiyuan Sun - Jun 9, 2021 at 7:23AM

The ability of this biotech to sell its coronavirus vaccine in a timely manner has caused a lot of headaches for investors.

Ocugen (OCGN 5.97%) has been a rags-to-riches coronavirus stock with a stunning 3,830% return over the past year. The company rose to prominence after becoming the exclusive U.S. distribution partner of Indian coronavirus vaccine developer Bharat Biotech. In clinical trials, Bharat Biotech's coronavirus vaccine Covaxin showed 78% efficacy against COVID-19, has a good safety record, and can be stored for three months at room temperatures.

Covaxin has since received regulatory clearance in over 13 countries, with 300 million doses supplied to date. Ocugen seeks to be a part of that success by importing the vaccine from India for domestic use. Can this feat create wealth for investors? Or is the stock very overvalued? 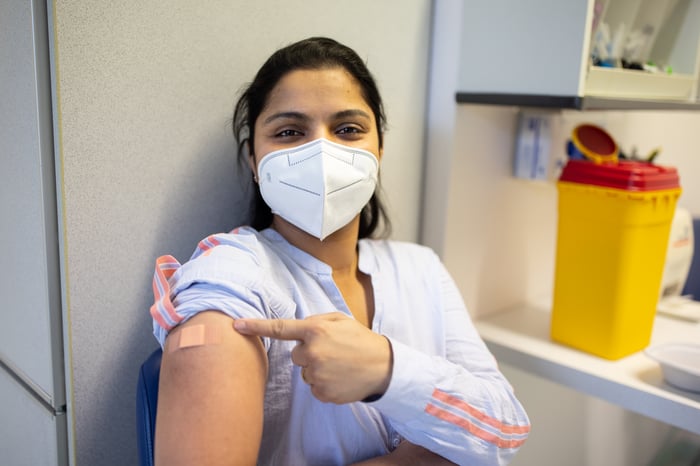 Ocugen has been trying to sell 100 million doses of Covaxin in the country since March. It is on track to submit an Emergency Use Authorization (EUA) for the vaccine with the U.S. Food and Drug Administration in June. After that, it would take approximately one to two months for the agency to consider its approval. Under the licensing agreement, Ocugen will receive 45% of the profits from vaccine sales in the U.S. and Canada.

Investors are essentially betting on the notional value of the agreement between Bharat Biotech and Ocugen. Things don't look well. The anticipated release date of Covaxin coincides with the near completion of vaccination programs in the country. Hence, many believe that it would not be able to land any orders for Covaxin.

There is a possibility that the company could get what it wants, and maybe even more. A vaccine that is highly effective, has negligible safety issues, and is easy to transport would probably catch the eye of the Department of Defense should it land an EUA.

The way the numbers are presented also severely undermines Covaxin's efficacy. For starters, Bharat Biotech's study took place in India, where the highly infectious, highly resistant B.1.617.2 variant was already running rampant. Nevertheless, Covaxin was able to prevent 100% of cases of severe disease from the much stronger variant.

Meanwhile, the standard of care vaccines, such as the one (Comirnaty) made by Pfizer-BioNTech, had higher overall efficacy as their studies relied on patient exposure to the original COVID-19 strain. However, research has shown neutralizing antibody response for Comirnaty after one dose drops to 32% for B.1.617.2 compared to 79% for the original coronavirus. Those who completed a two-dose regimen witnessed a similar comparative decline.

Its potential for national defense and strong protection against variants make Covaxin a viable choice, even after initial vaccination campaigns are over. For every 100 million doses Ocugen sells, it can earn up to $135 million in pre-tax profits, assuming a price of $10 per dose. a 30% pre-tax margin, and using the 45% partnership agreement. That's not bad a for a company with a market cap of $1.7 billion.

There are compelling reasons why the government could consider stockpiling COVAXIN -- but it's basically a wild card. However, keep in mind that the rest of the country probably won't need those 100 million doses. The 18+ U.S. population stands at about 250 million, and Pfizer (PFE 3.77%) and Moderna (MRNA -0.37%) both have agreements with the government to supply 300 million doses. Meanwhile, Johnson & Johnson (JNJ -1.10%) also had an agreement to sell 200 million doses of its one-dose vaccine. For a company looking to sell 100 million doses by the remainder of 2021 without having landed an EUA, things are looking a little sketchy.

Investors should realize that the time to make money off Ocugen stock may be over. Existing shareholders who became wealthy through the run-up should probably take profits now. I would stay away from the biotech until it can lock in that deal.