The online styling service redeemed itself after a poor showing three months ago.

Stitch Fix (SFIX 22.89%) stock was up double digits after hours on Monday after the online styling service posted better-than-expected results in its third-quarter earnings report.

Revenue rose 44% from the lockdown-impacted quarter of a year ago to $535.6 million, easily beating the company's own guidance of $505 million to $515 million and the analyst consensus at $510.6 million. It also reported a surprise adjusted EBITDA profit of $11.6 million when the company had forecast a loss of $5 million to $9 million.

The headline numbers explain the stock's gains, but let's take a look at a few key points from the report. 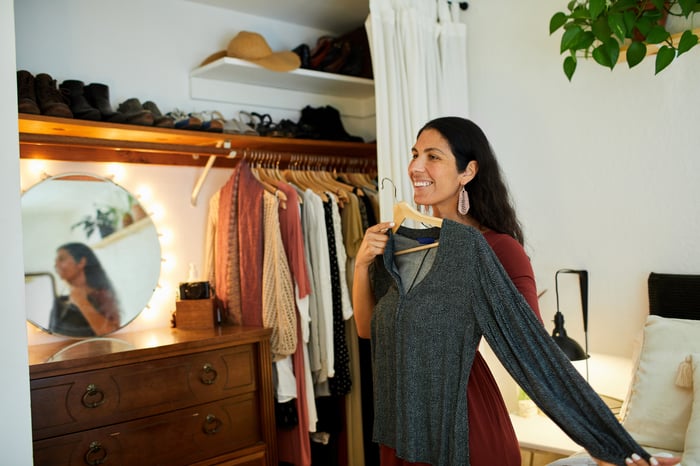 1. Guidance was probably too conservative

Wall Street loves a beat and raise and that's exactly what Stitch Fix did in the third-quarter report, but this wasn't as impressive as a typical earnings beat. The growth stock had plunged after its second-quarter earnings report when the company missed estimates on revenue and it lowered its full-year guidance as a result. The primary reason management gave for missing its own guidance was shipping delays due to high e-commerce demand and capacity-constrained shippers. If that was the real reason, you'd expect those sales to just shift into the third quarter, but management guidance called for essentially flat sequential earnings growth.

That didn't really make sense considering that Q2 is a seasonally weak quarter, and the company was benefiting from tailwinds related to the reopening as vaccination rates rose. Stimulus checks could have also provided a boost, though CFO Dan Jedda said on the earnings call that the company couldn't determine an impact.

Based on the broader economic reopening and the company's own seasonality, the guidance seemed to set the company up for an easy beat.

2. The direct buy expansion is still on track

Last year, Stitch Fix launched direct buy, allowing customers who had already ordered a Fix to purchase clothes based on a curated selection, allowing them to shop as they would on any other website but with the advantage of Stitch Fix's recommendation algorithm that knows their fit, budget, and style. Management continues to be pleased with its growth, noting that its newest clients are purchasing at increasing rates.

In late July, the company is planning to open up direct buy to new clients, dramatically expanding Stitch Fix's addressable market. The move should accelerate the company's growth, and management envisions direct buy becoming as big of a business as its core Fix offering.

The direct buy cold launch is part of the reason why Stitch Fix is bringing on Elizabeth Spaulding as its new CEO as the expansion looks to be the company's most pivotal moment since its IPO. While it's too soon to tell how the offering will perform with new clients, it's a good sign that the launch to new clients is still on track after a prior delay.

3. Shop is getting better

Stitch Fix added an important component to Shop, as it also calls direct buy, in the quarter. In March, the company opened up Shop by Category to all of its existing clients. Shop by Category gives clients a curated selection of clothes based on categories such as casual tops, date night, outdoor adventure, and fresh florals. Much like Netflix does with movies, Stitch Fix is offering its customers categories that its competitors don't or can't because it understands its customers' styles on a level that most clothing retailers never will.

Management said that following the Shop by Category launch in March, it saw a meaningful increase in client engagement that led to average weekly units ordered per client reaching a record for the third quarter.

In Fixes, Fix Preview, which allows customers to see what they're getting before it ships, has also increased its success rate.

Stitch Fix saw its second-highest quarter-over-quarter growth in active clients in the third quarter, adding 234,000 from the second quarter. The company faces a significant level of skepticism from investors as 22% of its float is sold short, but it is steadily growing its customer base, and the pieces for the successful launch of direct buy to new clients appear to be in place.

Coming out of the pandemic and with a new product launching shortly, Stitch Fix still has plenty of upside potential ahead.