The steel mill and iron ore supplier saw a big jump and three bits of news. One was likely the most important today.

Shares of Cleveland-Cliffs (CLF 3.78%) rose as much as 18% on Wednesday and ended the day up by 14.6%. The steel mill and iron ore supplier's dramatic price move could be tied to any of three different pieces of news. But given the current Wall Street zeitgeist, it's likely that one had a bigger impact than the others today.

The first piece of news comes in a release from the company celebrating six months of "continued operation and production of hot-briquetted iron at the Company's state-of-the art Direct Reduction plant in Toledo, Ohio." This probably didn't have anything to do with the stock price, but it is notable in that it helps ensure the company has access to key steelmaking inputs. 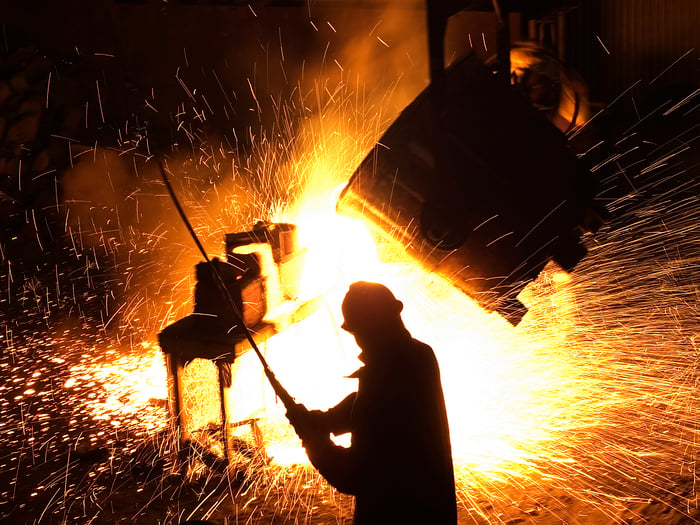 The second news item is industry related: Iron ore prices were on the rise today. As a producer of iron ore and steel, Cleveland-Cliffs will benefit at least a little from higher commodity prices. But that's probably not the big reason for the move, either, given that fellow North American steel mill stocks only fell a little (between 1% and 3%) and big iron ore producers rose just a touch. If iron ore prices were a material issue in today's advance, you'd expect bigger moves in the broader industry.

Which leaves the third story of the day: Reddit. Commentators on the service have been talking up Cleveland-Cliffs' stock, suggesting that there could be a short squeeze in the works. This is not the best reason to buy a stock, unless you are trying to be a market timer. However, investors have increasingly gravitated toward a lottery-ticket mentality and, in the end, this is likely the reason for Cleveland-Cliffs' big rally. In other words, the whims of investors held sway today.

The last year or so has seen a major transition take shape at Cleveland-Cliffs, as it used acquisitions to transition from an iron ore producer to an integrated steel mill. One of the big knocks against the company is that this effort left it with a heavily leveraged balance sheet compared to its domestic steel peers.

That is a very legitimate concern and one that long-term investors should carefully consider. But if you are just interested in making a quick buck on a tip from a Reddit message board, well, good luck and I hope you don't end up being the last one out the door. Indeed, as recent volatility in other Reddit favorites has shown, investor sentiment can change quickly and dramatically.