Please ensure Javascript is enabled for purposes of website accessibility
Log In Help Join The Motley Fool
Free Article Join Over 1 Million Premium Members And Get More In-Depth Stock Guidance and Research
By Alex Carchidi - Jun 12, 2021 at 6:40AM

It probably won't be a bargain forever.

When people talk about having a green thumb, it's easy to imagine the fruits of their labor in the garden, perhaps in the form of a greenish heirloom tomato being supported by a sagging vine. But when it comes to agrobusiness, success with one crop might not be a guarantee of getting a different crop to grow and efficiently make its way to the market.

That's exactly the dilemma facing Village Farms International (VFF -3.31%), a vegetable company that started selling cannabis in an attempt to capitalize on its expertise with indoor cultivation. While it hasn't proven that it can grow marijuana as profitably as it grows tomatoes, shareholders are already pleased thanks to rapid revenue growth and the prospect of accessing the U.S. cannabis market. Due to the volatility of its earnings, this stock isn't for everyone -- but I'll get into that shortly. 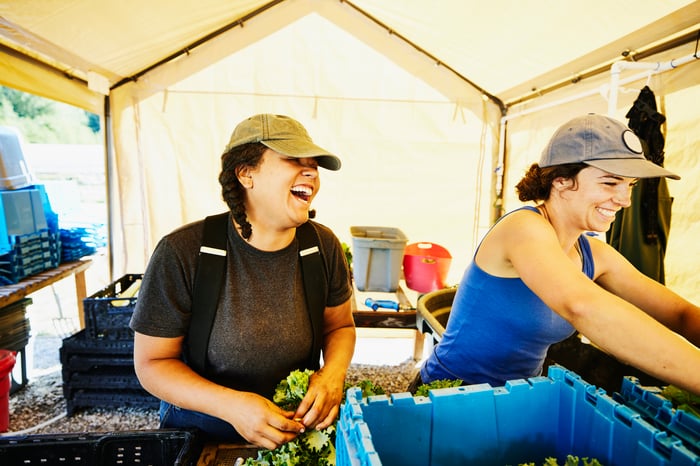 Why this stock is worth watching

Village Farms deserves a spot on your watchlist for a few reasons.

The first is that the market may be undervaluing the stock by putting too much weight on the short term. While in the most recent quarter Village Farms grew its total revenue by 63% year over year, it also reported a drop of 63% in its adjusted earnings before interest, taxes, depreciation, and amortization (adjusted EBITDA). The stock's price is still depressed from its highs earlier this year due to these poor earnings, but the company's capabilities have only increased over time, and there's a bit more to the story. Because the company derives the majority of its revenue from the sale of produce, any fluctuation in the market prices of vegetables can cause big waves.

Historically low tomato prices are more to blame for the recent earnings collapse than a decline in operational efficiency. So, as tomato prices rebound, so should Village Farms' stock. But, unless you're a tomato market oracle, it's hard to say exactly when that might be.

There's also no shortage of other opportunities for the company to make cash flow outside of selling tomatoes and cucumbers. Its cannabis business, Pure Sunfarms, brought in $17.4 million in the first quarter of 2021. Given that this revenue is already significant in comparison to its $34.9 million in produce revenue, it's entirely possible that the company's dependence on tomato pricing will be significantly lessened moving forward. That's good news for investors, because it'll make the bottom line more resilient. But, they'll also need to worry about the earnings impact of the price of cannabis as well as the price of tomatoes.

Regardless of plant pricing, Village Farms also has a plethora of outstanding warrants, which were created during its September 2020 registered direct stock offering. Most recently, it earned $17.7 million in cash from some of the warrants being exercised. There are still more than 1.65 million of these warrants outstanding, which means that there's potentially a lot more income to be had. It's unclear whether the market has appropriately priced in the value of these warrants, given that they are proven to be capable of yielding more than the company's cannabis segment in a single quarter.

Finally, the price-to-book (PB) ratio suggests that it's undervalued. The agriculture sector has an average PB of 3.21, which is a bit higher than Village Farms' ratio of 2.28 in the most recent quarter. That means investors get a bit more book value for each share with the stock than they might with an equivalent investment elsewhere in the industry.

Why not just buy it today?

If you're willing to make a principled bet on Village Farms' cannabis business taking off over the next few quarters, there's no reason to avoid investing in it today. If its first quarter of cannabis revenue is any indication, there's a huge amount of room for this stock to run with the help of bulk cannabis sales. But, if you aren't very tolerant of risk, it's probably a better idea to add it to your watchlist instead.

It's likely that at least some of the pricing issues in the tomato market are a result of residual weirdness in the supply chain that's attributable to the coronavirus pandemic. While people in the U.S. may feel as though the pandemic is over, it's still a significant problem affecting the majority of the world. In other words, I don't think it's wise to predict that the tomato market is on the verge of returning to normalcy, as that might take years. And for the chances of this stock to really soar, tomato prices matter quite a bit.

So, just keep an eye on Village Farms. When the stock starts to pop after an earnings report, it'll be the right time to consider a purchase.