Please ensure Javascript is enabled for purposes of website accessibility
Log In Help Join The Motley Fool
Free Article Join Over 1 Million Premium Members And Get More In-Depth Stock Guidance and Research
By Billy Duberstein - Jun 13, 2021 at 5:45AM

Cannabis stocks have cooled off with other growth stocks since February. Now may be the time to pick these leaders up before they run again.

The U.S. cannabis industry is experiencing torrid growth. Stigmas are fading, and a critical mass of states have adopted legal marijuana, either for medical or recreational use. Yet federal regulations are still holding the industry back, as U.S. cannabis companies are still burdened with onerous borrowing and tax costs.

That could -- with an emphasis on "could" -- change this year. Senate Majority Leader Chuck Schumer has said he will be putting forth a comprehensive cannabis legalization bill sometime "soon." It's an open question whether it will pass, but passage would be a big catalyst for U.S.-based multistate operators.

Although there are many attractive companies in the space, today Ayr Wellness (AYRW.F -8.30%), Cresco Labs (CRLBF 1.70%), and Jushi Holdings (JUSHF -6.40%) look like especially solid choices at this stage of the industry. 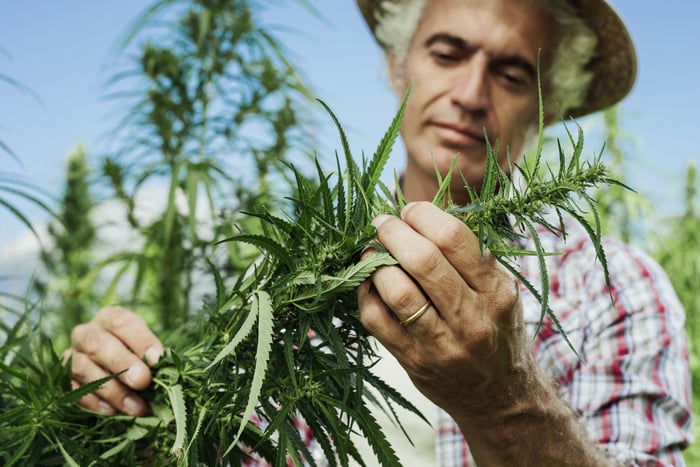 Ayr Wellness: A 2020 caterpillar that will turn into a butterfly in 2021

Ayr Wellness has closed four major acquisitions in new sates since December, and it's set to close the acquisition of New Jersey cannabis operator GSD New Jersey in July. Once completed, Ayr will have gone from a two-state to a seven-state operator, in some of the most attractively regulated states in the United States.

Of particular note is the company's acquisition of Liberty Health in Florida, which Ayr purchased for only $290 million and closed at the end of February. In fact, on a recent conference call with analysts, Chairman John Sandelman said, "It's always been my belief that the Liberty asset by itself will be worth more in the future than the current value of our stock today."  On a fully converted share basis, Ayr has about a $1.9 billion market capitalization.

Why so much optimism for the Florida asset? It's because Ayr bought Liberty as it was having cultivation problems in Florida's humid climate, with 25% yield losses. As a result, Liberty was only able to supply its stores for two days a week. Ayr's management has already improved yields to levels equal to the rest of the industry and has also increased grams per square foot by 60%. Liberty now has product on the shelves four to five days a week, on the way to a full seven days this year.

Not only that, but Ayr still trades at a discount to other major U.S. MSOs, based on 2022 estimates of EBITDA. That's likely due to the market's failure to understand the step-change in revenue and profits the company should see this year. But with strong first-quarter performance and big improvements already in Florida, Ayr still seems like a bargain.

Another company branching out to new states, including Florida, Massachusetts, and Ohio, is Cresco Labs. Those new states would bring Cresco's state count to 10, covering 10 of the 19 most populous states in the United States.

Cresco has differentiated itself by focusing on large states and wholesale distribution. That is, instead of selling its brands only in its own stores, it aims to get its brands in front of as many people as possible as quickly as possible as the industry develops, perhaps at the sacrifice of near-term margins. If federal regulations are rolled back, some of the state-level barriers may come down, and companies will compete on brand strength and mindshare, just as they do in other industries, such as alcohol and tobacco.

Although Cresco Labs' adjusted EBITDA margin came in at just 20% last quarter -- still good, but below some of its peers -- margins should rise in the second half of 2021 as the company scales new assets. Cresco recently acquired Bluma Wellness in Florida and Cultivate in Massachusetts, two highly attractive states that should boost margins. CEO Charles Bachtell also said the company invested heavily in the fourth quarter of 2020 and the first quarter of 2021, and "now our expertise with integrating new assets and producing operating leverage will kick in."

Cresco appears to be attacking the industry in the right way, with aggressive wholesale distribution and a concentration of highly productive retail stores. As the company scales, margins should trend up with growth later this year.

Jushi Holdings: A small-cap cannabis play, but for how long?

Finally, Jushi Holdings is a smaller name in the space, about a $1.4 billion market cap, when factoring in all of its yet-to-be-converted warrants. That means there could be significant upside, or the company itself could even be an acquisition candidate for a large MSO.

Jushi is prudent about targeting limited-license jurisdictions, including its large core state of Pennsylvania, where it has 13 stores, along with Illinois, where it has four stores, and Virginia. Virginia just legalized adult-use cannabis, and Jushi is just ramping up its first stores in suburban Washington, D.C., one of five state "zones" where a company is granted an exclusive license. Jushi is also adding a fourth core market of Massachusetts, having just agreed to purchase Nature's Remedy, the owner of two high-traffic dispensaries and a 50,000-square-foot grow facility. In addition, the company maintains smaller but carefully selected footprints in developing markets of Ohio, Nevada, and California.

Revenue is accelerating for Jushi, up 29% sequentially, with last quarter already exceeding half of 2020's full-year revenue. That strong momentum should continue when the Massachusetts acquisition closes later this year.

Insiders have contributed $47 million of their own capital to Jushi, so one would expect the team to prudently manage its capital allocation to high-return opportunities as things develop. And again, given the potential for industry consolidation, I wouldn't be surprised to see Jushi acquired by a larger player one day.