Please ensure Javascript is enabled for purposes of website accessibility
Log In Help Join The Motley Fool
Free Article Join Over 1 Million Premium Members And Get More In-Depth Stock Guidance and Research
By Jim Halley - Jun 15, 2021 at 8:34AM

These two multistate operators more than doubled investors' money in 2020. Which is the better choice for investors right now?

While the market in general has been off to a strong start in the first half of the year, both of these stocks have seen a pullback over the past three months, with Cresco down more than 13% and Jushi down more than 14% in that period. I see this as a potential buying opportunity, though, as both cannabis companies continue to show improving financial data.

To determine the better stock for right now, we need to examine which stock is less of a risk, has more likely growth, and is overall the better deal. 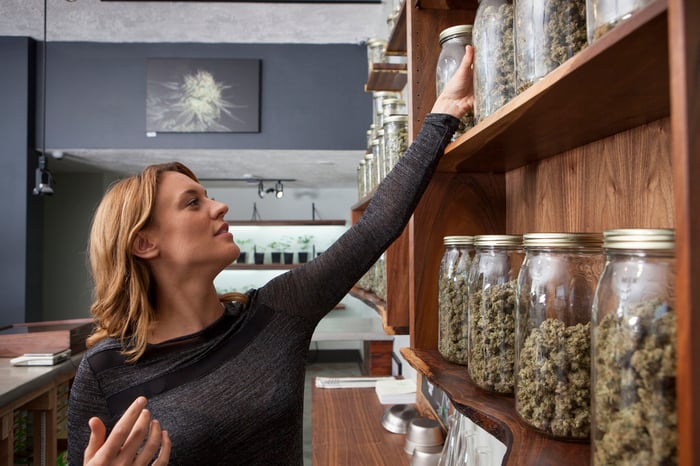 Chicago-based Cresco is certainly the bigger cannabis company of the two, with $178.4 million in revenue in the first quarter, more than four times the $41.7 million that Jushi brought in. While bigger isn't always better, it certainly helps in cannabis. More revenue means more possibilities for expansion, whether by opening new dispensaries or though acquisitions. We're still in the early years of cannabis, but it makes sense that the taller plants -- to twist a metaphor -- will get more of the sunshine, rain, and market share.

Cresco, founded in 2013, is already firmly established as the biggest cannabis company in Illinois, which is one of the sector's most profitable states so far. It has a total of 32 dispensaries -- with licenses for 44 -- across 10 states. It is focusing most of its efforts on states where there are limited licenses, such as Illinois (where it has 10 dispensaries), New York (where it has four), Ohio (where it already has the state's maximum of five), and Pennsylvania, (where it has four). It was the first cannabis company to be operational in Ohio and Pennsylvania.

What truly sets Cresco apart, however, is its strong wholesale revenue. The company has focused on its brands, and that decision has paid off. Management said in the quarter that it pulled in $95.6 million of its revenue from its wholesale segment, an increase of 150.8% year over year and more than 5.7% sequentially. The wholesale side gives Cresco an upper hand when it does open up in a state -- its brands are already familiar because they are sold in 700 dispensaries across the country.

Few cannabis companies are consistently profitable, but Cresco appears to be headed in that direction. Though it lost $24.1 million in the first quarter, it reported $34.9 million in adjusted EBITDA, its eighth consecutive quarter of positive adjusted EBITDA.

Jushi Holdings, based in Boca Raton, Fla., is all about revenue growth. The company reported yearly revenue of $80.8 million in 2020, up 689.6% year over year. The company isn't profitable, but it's certainly headed that way, with an adjusted EBITDA loss of $3 million in the quarter compared with a $28 million loss the year prior.

The company's first-quarter numbers -- which came in late, a slight concern that the company blamed on its auditor MNP  -- showed continued growth, with revenue of $41.7 million, up 29% sequentially and 385% year over year. Though it is clearly a smaller company than Cresco, Jushi already has similar gross margins of 45%, compared with Cresco's 48.8.

Jushi has operations in seven states, and like Cresco, it's concentrating on lucrative locations with limited licenses. It has 20 dispensaries nationwide and just opened its 13th in Pennsylvania, thanks to its subsidiary, Franklin Bioscience. Its next biggest presence is in Illinois, where it has four dispensaries. The company has also begun a $110 million acquisition of Nature's Remedy that should close by the end of the year, giving it two dispensaries in Massachusetts as well as a cultivation and production facility in that state. Finally, Jushi also has a $5 million acquisition of OhiGrow in the works, which will make it one of 34 licensed cultivators in Ohio.

A lot of people are excited about Jushi because it has come so far since it was founded only three years ago. Based on what it has done so far this year, it's not a stretch to say that it could more than double its yearly revenue.

The choice depends on your own investing style

Cresco, because of its larger footprint and broader reach, poses less risk for investors. The company could be profitable by the end of the year, and that development will certainly help its stock price. Its diversity -- with more than half of its revenue coming from wholesale -- positions the company to better weather any downturn in the market. Even at its higher price compared to Jushi, it appears to be a better buy right now, with a lower valuation compared to forward sales.

Jushi, while riskier, certainly shows that it is likely to have more growth this year. Its acquisition strategy will help it beef up its revenue, and if it can do that while maintaining or even improving its gross profit margin, the stock could easily double -- something that is less likely for Cresco.