Please ensure Javascript is enabled for purposes of website accessibility
Log In Help Join The Motley Fool
Free Article Join Over 1 Million Premium Members And Get More In-Depth Stock Guidance and Research
By Prosper Junior Bakiny – Jun 15, 2021 at 9:35AM

The company's newly approved drug could generate billions in revenue per year.

Good things come to those who wait, or so the adage goes. Biotech giant Biogen (BIIB -1.42%) can certainly testify to the truth of this piece of wisdom. After a long and arduous journey, the company recently received approval for its Alzheimer's disease (AD) drug aducanumab from the U.S. Food and Drug Administration (FDA); the medicine will be marketed as Aduhelm.

The regulatory agency went against the wishes of an independent panel that strongly opposed the approval of this drug back in November 2020. The controversial decision will likely continue generating tons of headlines, but with this major win under its belt, how much upside can Biogen's shareholders expect?

The market opportunity for Aduhelm

There are several reasons why the approval of Aduhelm was a big deal. For one, Biogen actually discontinued the development of this drug back in 2019 after a futility analysis conducted by an independent committee concluded that the drug would likely not meet its primary endpoint in a pair of phase 3 clinical trials. 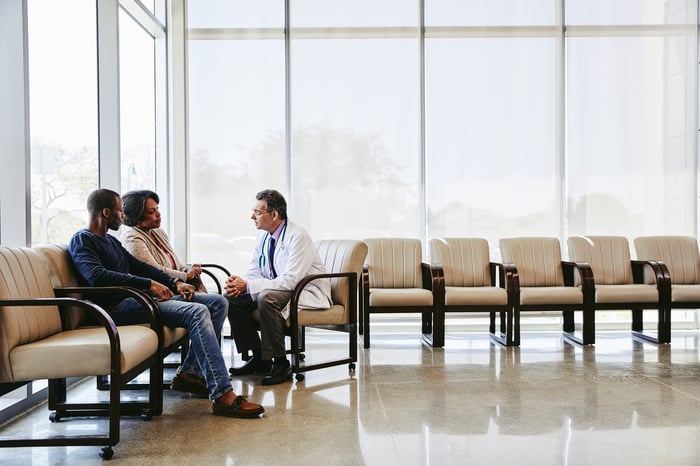 The company brought the project back to life in October 2019, arguing that a second look at the data showed significant benefits for AD patients treated with Aduhelm. Everyone likes a story with lots of twists and turns, and Aduhelm's journey definitely fits the bill. But there's another reason why this approval was so important.

Aduhelm is the first drug for the underlying causes of AD to be approved by the FDA. It works by reducing the level of amyloid plaques in the brain. The accumulation of the beta-amyloid protein in the brain is thought to be a main cause of AD. Aduhelm is also the first drug of any kind approved to treat AD since 2003.

There are more than 6 million AD patients in the U.S., which means the market for Aduhelm is vast. The drug isn't a cure or a one-time treatment. It is to be administered intravenously once every four weeks or so. Aduhelm comes with a steep price tag: It will cost $56,000 a year per patient.

Biogen expects this medicine to generate several billion dollars per year over the next several years. With a new (future) blockbuster drug in its lineup, Biogen's future looks good, at least in the near to mid-term.

Is Biogen stock a buy?

Before purchasing shares of Biogen because of Aduhelm, here are two things to consider. First, the company's stock has already seen some benefit from this news. Shares of Biogen soared by more than 40% following the regulatory nod. The company is up by 65.2% year to date, while the S&P 500 is only up by 13.29%. 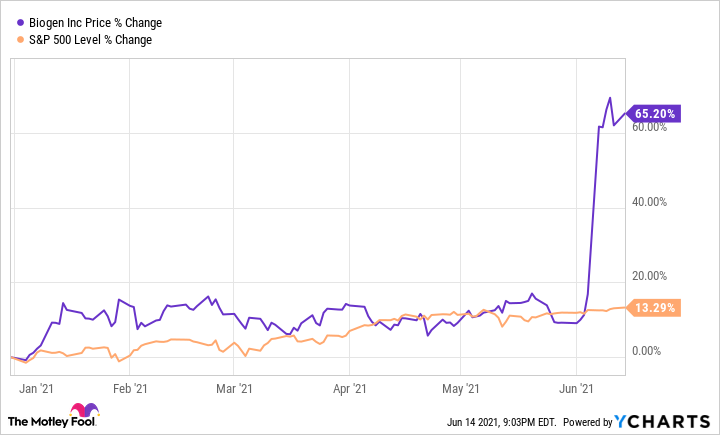 Biogen's results for its first quarter ending March 31 weren't impressive, though, and the company owes this performance almost entirely to Aduhelm.

Second, a judge invalidated a patent on Tecfidera last year. The multiple sclerosis drug was Biogen's top-selling product. Now that it's facing competition from biosimilars, sales of Tecfidera will continue to suffer. Revenue from this drug dropped by 56.4% to $479.3 million in the first quarter, and the company's total revenue declined by 24% to $2.7 billion.

Despite these caveats, though, it is hard to ignore Biogen's huge opportunity in the AD market. Sales of Aduhelm will likely help turn things around for the company's top line in the next few years.

And beyond that, Biogen is running over a dozen clinical trials, and investors can be certain that the company will make moves to strengthen its lineup beyond Aduhelm. The company is currently trading for a forward price-to-earnings (P/E) ratio of 22.1, which is just slightly above that of the S&P 500 at 21.

Biogen's price-to-sales ratio stands at 5 -- also a bit high, but not wholly unreasonable. With that said, I believe Biogen's stock still has considerable upside left, which makes this biotech stock a buy today.