Please ensure Javascript is enabled for purposes of website accessibility
Log In Help Join The Motley Fool
Free Article Join Over 1 Million Premium Members And Get More In-Depth Stock Guidance and Research
By James Brumley - Jun 15, 2021 at 8:15AM

Big Blue may be late to the party, but it's not too late for the company to leverage even just a little market share into a lot of revenue.

International Business Machines (IBM 0.90%) waited too long to make a big bet on hybrid cloud computing. While the company was tinkering at this intersection of public and private clouds, it wasn't until 2018's decision to acquire Red Hat that IBM was truly "all-in." By then Hewlett Packard Enterprise (HPE -0.13%), Microsoft (MSFT -0.26%), VMware, and a slew of other technology names were already carving out their piece of the market. Any hybrid cloud growth from here will require taking market share from other well-established vendors.

Nevertheless, investors have a reason to get excited about IBM's ramped-up ongoing foray into the industry. See, even merely modest success with hybrid hardware leads to enormous incremental software and service revenue growth.

One begets the other

While IBM isn't just a hardware company anymore, hardware is still a key component of the company's top line. Its software and services are largely a means of supporting sales of hardware. 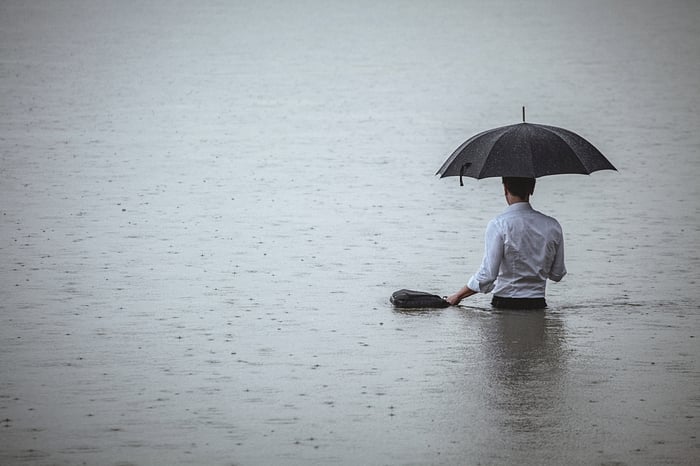 Relatively new CEO Arvind Krishna, however, is flipping the script. Rather than prioritizing hardware and adding software to the mix, hardware is ultimately becoming a means of driving more and higher-margin software sales.

The clue -- and potential -- of this ambition is evident within a corporate talking point that's been dished out several times in recent months but never given its due attention. IBM's CFO Jim Kavanaugh reiterated it at a recent investor conference, explaining "for every $1 [worth of business] we land on a hybrid cloud platform we see $3 to $5 of software drag and $6 to $8 dollars of services drag."

"Drag" isn't being used negatively, for the record. By drag, Kavanaugh simply means the purchase of IBM's hybrid cloud solutions results in the purchase of other IBM-offered goods and services.

Whatever the wording, that's one heck of a multiplier!

Not yet, but soon

It's unclear to what exact extent the organization is already realizing these multiplier metrics, or for that matter, the amount of hybrid cloud business IBM is doing in the first place. We know that Red Hat makes up the core of this piece of the company's hybrid business, and Red Hat was doing about $3 billion in annual sales before it was acquired by IBM back in 2019. But pairing Red Hat's technology with some of IBM's existing products and services has certainly made the combined company's hybrid cloud offer a much more marketable one.

What is clear, however, is that IBM doesn't yet appear to be doing as much software and services business as Kavanaugh's cause/effect ecosystem would lead investors to expect.

Take a look. The company's revenue mix from 2020 more or less looks like 2018's, before it added Red Hat to the fold. The biggest change is simply that most of what used to be classified as solutions software within the technology services and cloud platforms unit is now part of the cloud and cognitive software division where it's considered cloud and data platforms revenue. Everything else is more or less the same. Where's Red Hat's hybrid's upside? 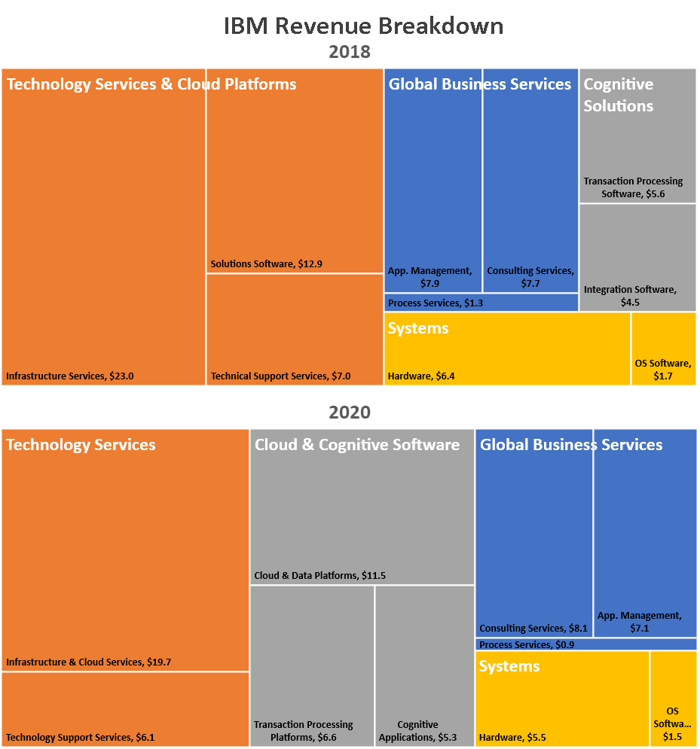 This isn't a sign of failure, though. In fact, it's quite the opposite. This is the nuance that should get investors stoked. It may not be happening in a way or to a degree that's apparent yet thanks to the advent (and now the echoes) of the pandemic. But it's coming, and it's going to be a game-changer.

Krishna has commented in the recent past that the hybrid cloud computing market is a trillion-dollar opportunity when factoring in all the support, service, and software needed to power it -- a figure that market research outfit McKinsey and others echo. Yes, that's trillion with a "t." The market's projected to grow at a double-digit percentage pace for at least the next several years en route to that size.

IBM won't win all of that business. It won't even win most of it. As was noted, others like Hewlett Packard Enterprise and Microsoft are already way ahead in this race.

But Big Blue doesn't need to win all of this business for the sheer prospective size of this hybrid cloud market to create a major fiscal impact. The company simply needs to continue leveraging Red Hat and the Red Hat name. Every dollar spent with it generates more than $10 worth of revenue across IBM's other software and service business lines. That's huge, particularly for a company that's only doing about $74 billion worth of annual business now.

Bottom line? Buckle up. The revenue-driving ecosystem Kavanaugh and Krishna continue to reference is more about the future and less about the present. That future is near, though, and likely underestimated by most investors. That translates into an opportunity for investors who aren't underestimating what lies ahead.