Please ensure Javascript is enabled for purposes of website accessibility
Log In Help Join The Motley Fool
Free Article Join Over 1 Million Premium Members And Get More In-Depth Stock Guidance and Research
By Leo Sun – Jun 16, 2021 at 5:46AM

Should investors stick with the tech titan or take a chance on a high-growth silo-busting company?

Alphabet (GOOG -1.39%) (GOOGL -1.40%) and Datadog (DDOG -2.42%) went in opposite directions over the past few months as the rotation from growth to value stocks rattled the tech sector. Alphabet's stock has risen nearly 40% since the beginning of 2021 as Google's advertising business recovered from the pandemic and its cloud business expanded. Its balance of growth and value, a quality that it shares with the other FAANG stocks, also shielded it from the sell-off in pricier tech stocks.

Datadog's stock has dipped about 3% this year, disappointing investors, who expected a continuation of its 160% rally in 2020. Like many other high-growth software stocks, Datadog's frothy valuations exposed it to the broader tech sell-off more than mature tech companies like Alphabet. 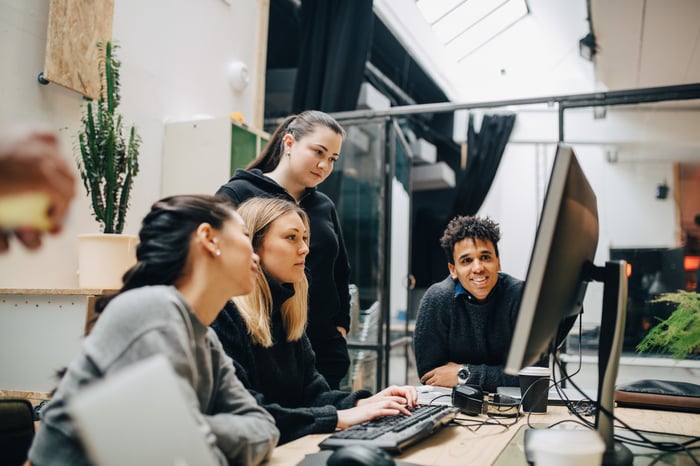 Looking beyond this tumultuous year for tech stocks, will Alphabet remain the better investment? Or will Datadog resume its upward climb and outperform Google's parent company over the long term?

The differences between Alphabet and Datadog

Alphabet generated 80% of its revenue from Google's advertising platforms in 2020. This business struggled in the first half as companies bought fewer ads during the pandemic. The growth of Google Cloud, however, which benefited from the soaring usage of online services throughout the crisis, cushioned the blow. Its advertising business also recovered in the second half as the initial disruptions passed.

Datadog is a much smaller company, generating just $603.5 million in revenue in 2020 -- compared to Alphabet's $182.3 billion. Its platform enables IT professionals to monitor the performance of multiple servers, databases, cloud services, and mobile apps on unified dashboards.

This approach breaks down fragmented data silos across large companies and makes it much easier to diagnose problems. Demand for Datadog's services remained robust throughout the pandemic, since companies still needed to keep their online systems up and running.

How fast are Alphabet and Datadog growing?

Datadog is growing much faster than Alphabet, but that isn't surprising since it's a younger and smaller company.

Datadog's growth decelerated as it faced challenging year-over-year comparisons. However, it kept its net retention rate above 130% through the first quarter, which means its existing customers are still spending at least 30% more money on its services year over year.

Three-quarters of Datadog's customers were using two or more of its products in the first quarter, up from 63% a year ago, which indicates its ecosystem remains sticky and its "land and expand" approach is working.

Datadog also closed its acquisitions of the cloud security company Sqreen and the data visualization firm Timber last quarter. Those acquisitions will broaden Datadog's portfolio, but they also suggest it might rely more on acquisitions to keep growing. It expects its revenue to grow about 47% this year.

On the bottom line, Alphabet is consistently profitable by both GAAP and non-GAAP measures. Datadog is unprofitable on a GAAP basis but profitable on a non-GAAP basis, which excludes its stock-based compensation and other one-time expenses.

Alphabet's GAAP earnings rose 19% in 2020, and analysts expect 49% growth this year as its higher-margin ad business recovers. Those are impressive growth rates for a stock that trades at 26 times forward earnings.

Datadog posted its first non-GAAP profit in 2020 but expects that figure to decline roughly 34% this year as it integrates its recent acquisitions and ramps up its research and development (R&D) and marketing investments. That's a glum near-term outlook for a stock that trades at nearly 320 times forward earnings.

I admire Datadog's business, since its silo-busting platform is disruptive and saves IT professionals lots of time. But I don't believe its stock will outperform Alphabet's for the foreseeable future.

Datadog's stock has more than tripled since its public debut in late 2019 and is due for a breather. There's still too much growth baked into its stock, and investors will more likely focus on balanced growth stocks like Alphabet in this wobbly market.

Investors can still buy Datadog as a speculative long-term bet but shouldn't expect it to replicate its market-crushing gains from 2020 anytime soon.

1 Growth Stock Set to Soar 163% From Its 52-Week Low, According to Wall Street

A Bull Market Is Coming. 2 High-Growth Stocks to Buy Now and Hold Forever