Please ensure Javascript is enabled for purposes of website accessibility
Log In Help Join The Motley Fool
Free Article Join Over 1 Million Premium Members And Get More In-Depth Stock Guidance and Research
By Namrata Sen Chanda – Updated Jun 17, 2021 at 11:53AM

Despite the recent bearish sentiment, Bitcoin looks promising and could rebound over the long term.

Bitcoin (BTC -0.46%) is going through a rough patch as it has plunged nearly 50% since its previous high in April 2021. The flagship cryptocurrency lost $1 trillion in market cap last month, and this downward spiral has a mix of factors at play. In May, Elon Musk's tweet about Tesla not accepting Bitcoins wiped off 10% of its value. Later that month, China's crackdown on cryptocurrencies pushed Bitcoin below $30,000. And the IRS calling for stringent reporting on large crypto transfers added to the woes.

So, has the tide turned against Bitcoin permanently? The situation might be rattling for new investors, but if you have traced the journey of Bitcoin, this is nothing new. According to analysts, investors who owned Bitcoin for one to six months spurred the sell-off. Nevertheless, institutional investors, big corporations, and analysts are still pretty confident of Bitcoin's price rebound. 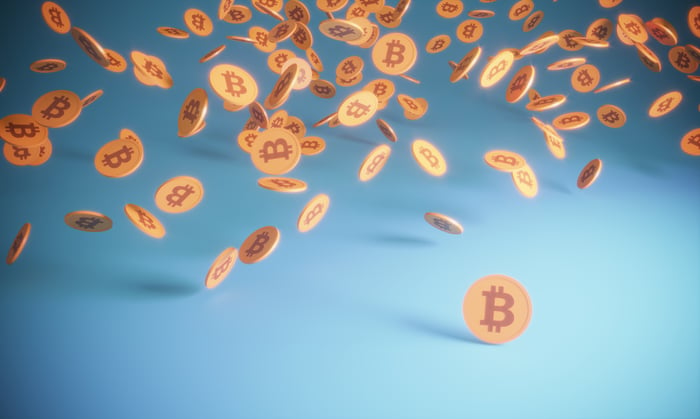 Here are three main reasons to explain that the current Bitcoin crash is nothing to worry about.

Institutional investors are still stocking up on Bitcoin

Institutional investors include large public and private companies as well as fund houses that invest in Bitcoin-related products.

Jack Dorsey-led Square invested an additional $170 million in Bitcoin in February 2021. In the same month, Microstrategy spent more than $1 billion in high-yield debt to acquire additional bitcoins. In March 2021, Morgan Stanley became the first big U.S. bank to offer access to Bitcoin funds to its high net worth clients.

Institutional investors aren't just hooked on Bitcoin for the price appreciation. They view the currency as a credible store of value and a hedge against economic instability. The continued influx of large corporations can single-handedly push Bitcoin into the mainstream. Bloomberg claims rapid bitcoin adoption indicates a bullish growth phase. The media giant also predicted bitcoin's price to reach $400,000 by the end of Q4 2021.

Besides institutional investors, many governments are also viewing cryptocurrencies in a new light. El Salvador recently declared Bitcoin as a legal tender alongside the U.S. dollar. Speculation is rife that India might also recognize Bitcoin as an asset class. Moreover, the U.S., UK, Finland, Canada, and Germany already have a positive stance over Bitcoin. These initiatives could perpetually alter the way investors and regulators view Bitcoin or other cryptocurrencies and make them mainstream.

Bitcoin has seen a bull run after halving events

50% of Bitcoins were mined by January 2009, but the remaining 50% will be mined in more than 120 years. This is because of a unique event called 'halving' that Bitcoin undergoes every four years. The miners' reward is reduced to half every four years or after mining every 210,000 blocks. Thus, the supply of Bitcoin relative to the demand declines, and the price climbs. Historically, Bitcoin has always experienced an upward spiral after a halving event. After the first halving in 2012, the price of Bitcoin surged 90x.

The next event is due in 2024, and we can expect the cryptocurrency to see a bull run after that. However, the market has now matured since 2012, and the impact might not be too pronounced this time. Also, it could take four to six months for the price appreciation to fructify. Hence, you may buy Bitcoin before the halving event, but only if you plan to hold it over the long term.

Though the current scenario suggests otherwise, the game is not over for Bitcoin. It has an inherent value, and a few tweets cannot shake it.

As for the regulatory landscape, I would say that stricter laws are indeed awaiting the cryptocurrencies. But better regulation will only enhance the credibility and prompt investors to pick Bitcoin with more conviction.

Bitcoin price movements are a simple play of supply and demand. Unlike stocks, there aren't any fundamentals at play. So when investors are optimistic about the future of cryptocurrency, they buy more of it, and the price climbs. On the contrary, when their belief in the currency begins to shake, they sell-off.

There is no doubt that Bitcoin has come under pressure, and it could take some time to recover due to regulatory headwinds and global macro risk. However, further declines below this point, if any, will be transient.

Bitcoin is a highly volatile asset, and you can hold them as a part of a diversified portfolio over the long term. However, don't be surprised to see such dramatic price fluctuations periodically because that's very typical of cryptocurrencies. So, be sure to invest money only to the extent that you are OK to lose. Also, don't try to time the markets because, with an asset so volatile, timing can bring a rude shock.

Here's What One Billionaire Thinks About Crypto Right Now

The Latest Bitcoin News You Need to Know

Why Bitcoin, Ethereum, and Solana Are Moving Higher Today