Please ensure Javascript is enabled for purposes of website accessibility
Log In Help Join The Motley Fool
Free Article Join Over 1 Million Premium Members And Get More In-Depth Stock Guidance and Research
By Leo Sun – Jun 16, 2021 at 10:30AM

But Apple shouldn't lose any sleep over Facebook's smartwatch plans.

Facebook (META -3.67%) could be developing a smartwatch with two cameras, according to The Verge. The camera on the front will likely be used for video calls, while the rear camera can be detached to capture photos and videos for Facebook's family of apps.

Facebook is also reportedly in talks with companies to develop accessories for attaching the camera to backpacks and other objects. Previous rumors regarding the watch suggested it will sport health-tracking features, run on a stand-alone cellular connection, and use a custom version of the Android operating system. Could this long-rumored device help Facebook challenge Apple (AAPL -4.91%) in the smartwatch market? 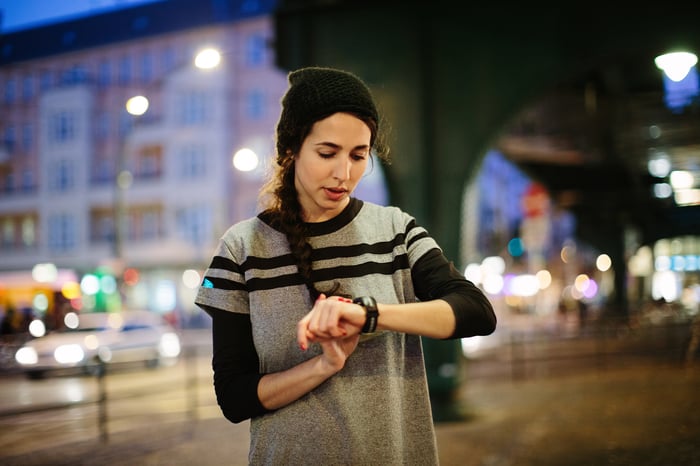 Facebook generated 97% of its revenue from ads last quarter. The remaining 3% came from its "other" businesses, which include its Oculus virtual reality (VR) headsets and Portal smart screens. It might initially seem odd for Facebook to add a smartwatch to that lineup, but it would actually complement its previous hardware strategies.

Facebook's strongest hardware business is its lineup of Oculus VR headsets. It could ship at least three million Oculus Quest 2 headsets this year, according to SuperData. That would make the stand-alone VR headset, which doesn't require a PC or phone, the clear leader of its niche market.

Looking beyond VR devices, Facebook is developing augmented reality (AR) glasses that will use similar controls as its Oculus headsets. It also acquired CTRL-Labs, which is developing a wristband that can use brain signals to control computers, in late 2019. In theory, CTRL-Labs' technology could eventually enable users to control VR and AR devices with "mind-reading" wristbands instead of controllers in the future. 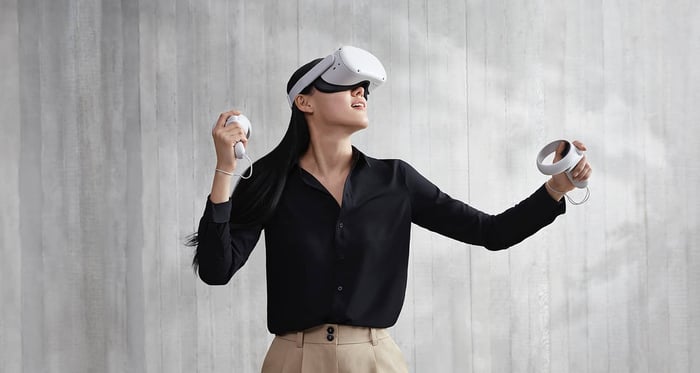 When you put all those pieces together, you'll realize Facebook's smartwatch could be used to enhance control of its VR and AR devices, or to expand its social networks into the Internet of Things (IoT) and perhaps succeed where the Portal failed. Facebook could also eventually upgrade its watches with CTRL-Labs' technologies and enable users to control other IoT devices with their minds.

But let's not get ahead of ourselves... yet

Facebook has reportedly spent about $1 billion on the development of its smartwatch over the past few years, but it only initially plans to ship volumes in the low six figures.

That would make Facebook a tiny smartwatch maker compared to Apple (AAPL -4.91%), which grew its Apple Watch shipments 19% to 33.9 million in 2020, according to Counterpoint Research. Apple ended the year with a whopping 40% share of the global smartwatch market.

Facebook likely realizes its smartwatch will face the same three problems that plagued the Portal: a deep distrust of Facebook's brand, privacy concerns, and its late arrival into a saturated market. Google also encountered similar criticisms after its recent takeover of Fitbit.

Facebook reportedly plans to launch its smartwatch next summer for about $400. But a lot could happen within the next year, and new smartwatches -- including a new version of the Apple Watch -- could easily steal Facebook's thunder. A smartwatch with two cameras could also be considered complicated and redundant, especially when smartphones and action cameras serve the same purposes.

The global smartwatch market could still grow from $59 billion this year to nearly $100 billion in 2025, according to Research and Markets. That's great news for Apple, but it also suggests the market might still be big enough for newcomers like Facebook to gain a foothold.

But investors should take all these rumors with a grain of salt until Facebook actually makes an official announcement. Even if Facebook's smartwatch fares better than the Portal, it probably won't generate a meaningful percentage of its revenue or reduce its overall dependence on ads.

Instead, it should be considered a potential expansion of its ecosystem beyond PCs and phones, which might just complement its ongoing push into the virtual and augmented reality markets.