Please ensure Javascript is enabled for purposes of website accessibility
Log In Help Join The Motley Fool
Free Article Join Over 1 Million Premium Members And Get More In-Depth Stock Guidance and Research
By Ryan Henderson - Jun 16, 2021 at 6:55AM

These three companies should have long runways for growth.

Since the five largest companies in America could all be classified as technology stocks, it's perhaps unsurprising that investors continue scouring the tech sector in search of the next big winner.

While these next three businesses might not crack the list of largest companies in the near future, Match Group (MTCH 1.88%), Wix.com (WIX 2.37%), and Activision Blizzard (ATVI -0.21%) could all provide attractive returns for shareholders over the long term. 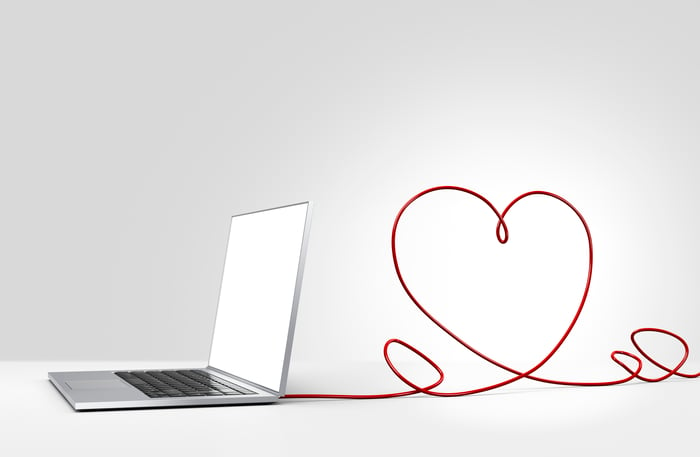 Online dating as a category has seen a meteoric rise over the last two decades. To illustrate, in 2009, roughly 20% of relationships started online, but by 2017 that number had jumped to nearly 40%. And Match Group has been a big reason why.

Match Group is an online dating conglomerate, home to a portfolio of apps including Tinder, Hinge, OkCupid, and plenty more. The company acquires and incubates smaller apps and helps them grow by leveraging its industry expertise and back-office support.

Today, across Match Group's various apps, the company boasts more than 11 million average subscribers -- more than double the same figure from five years prior. These subscribers helped generate $2.5 billion in revenue in the last 12 months alone -- up 18% from a year ago.

But it's not just new subscribers bringing in revenue for the company, either. During Match Group's latest quarter, average revenue per user grew 9% versus the prior year, which CFO Gary Swidler attributed partly to the launch of several new a la carte features.

As millions more consumers around the globe take to the internet to meet their matches, Match Group should be right there to benefit.

Wix.com offers a no-code website-building platform for all types of customers. While the company is well known for its easy drag-and-drop solution, Wix has quietly built out a range of additional features so that it functions more like a digital operating system for businesses.

Thanks to new services like logistics, order management, marketing, fulfillment, and plenty more, businesses can get all the functions they might need from a single place. Wix has even begun breaking out some of these features into an independent revenue category called Business Solutions Revenue. And in its most recent quarter, that segment grew by 97% versus the same period a year ago, with much of that growth coming from the company's new payments solution.

Though Wix faces fierce competition in the website building space from other prominent businesses like Shopify (SHOP -0.51%) and Squarespace (SQSP 5.12%), its management team appears confident. In the company's fourth-quarter earnings report of the latest fiscal year, CEO Avishai Abrahami stated that he believes "in the next five to seven years, 50% of anything new built on the internet will be done on Wix."

While that certainly seems like an audacious goal, Wix already boasts more than 5.5 million premium subscriptions, more than any of its direct competitors. And some industry experts project that low-code or no-code solutions could account for well above 50% of all web development by 2024, which should provide a nice tailwind for Wix.

Activision Blizzard is one of the largest video game publishing companies in the world. Home to a portfolio of long-standing franchises like Call of Duty, World of Warcraft, and more, the company has amassed a collection of avid fan bases thanks to its highly immersive game play and unique story lines.

However, while some of these franchises have certainly withstood the test of time, consumer habits around video games are changing. New systems like the Nintendo (NTDOY 0.82%) Switch and mobile phones have given rise to a whole new world of gamers eager to play. Activision appears to have recognized this.

Over the last 12 months, Activision Blizzard generated nearly $8.6 billion in revenue thanks to its revival of the prominent Call of Duty franchise. Thanks to the release of a mobile version in 2019 and a new free-to-play mode in 2020, Call of Duty was able to attract an entirely new pool of customers by applying an existing franchise to new styles of game play. This was made obvious in the most recent quarter when management announced that Call of Duty has tripled its monthly active user count over the last two years. And now it wants to replicate that process across its range of games.

With a rich library of hit titles like Diablo, Overwatch, Hearthstone, and plenty more, Activision Blizzard CEO Bobby Kotick seems hopeful that the company can reach its goal of 1 billion monthly active players by leveraging new modes of gaming.