Please ensure Javascript is enabled for purposes of website accessibility
Log In Help Join The Motley Fool
Free Article Join Over 1 Million Premium Members And Get More In-Depth Stock Guidance and Research
By Rhian Hunt - Jun 16, 2021 at 10:09AM

While its latest share issue spooked the market, the energy drink maker still has lots of momentum.

After a long bull run with more than 45% gains over the past month and a nearly 660% rise in the past year, Celsius Holdings, Inc. (CELH -3.72%) stock hit a sharp speed bump on June 9 after management announced a 6.5 million share supplementary public offering of stock. The company's stock price dropped on the news, rebounded somewhat at the close, then plunged lower after hours, at one point losing about 9% of its value.

Those interested in this stock probably shouldn't be too concerned about the announcement as there are still multiple signposts pointing to the fizzy growth of this energy drink producer continuing through the end of 2021 and beyond.

Here are three key reasons why Celsius stock still looks like a good investment despite the strong negative reaction from Wall Street traders to the new stock sale: 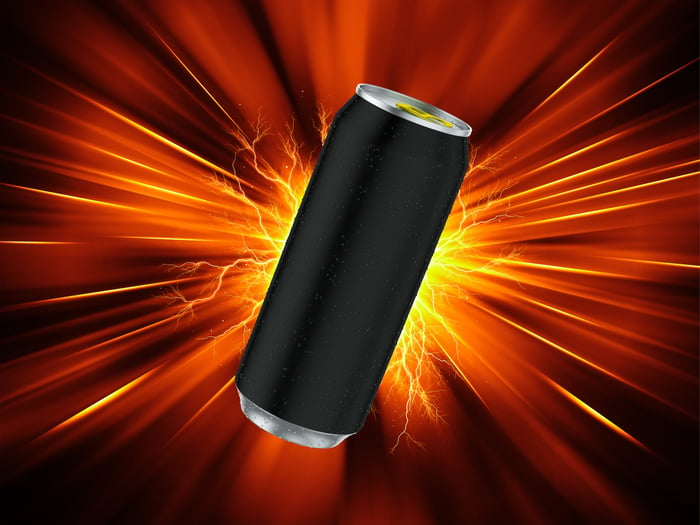 1. The stock issue is a small fraction of the total

The 6.5 million shares offered for sale on June 9, of which 1 million came from Celsius itself and the rest from existing stockholders, amount to less than 10% of the approximately 73.3 million shares currently outstanding according to the company's prospectus. With only the proceeds of the 1 million shares going to Celsius (earmarked for "general corporate purposes"), it appears only 1 million shares are actually being added to the total, with the other 5.5 million simply changing hands. The dilution from this sale will likely prove minimal, more than offset by Celsius' recent high-octane growth.

Continuing to swig up profits and generate sales as it quenches the thirst of increasingly health-conscious consumers, Celsius reported solid first-quarter 2021 results on May 19 to follow up on a successful 2020. Investors responded by bidding its shares up 14.5% in a single day, continuing a winning streak that wasn't seriously interrupted until June 9.

At the top line, Celsius' revenue jumped 78% year over year for the quarter, reaching $50 million, with the strongest growth in North America (up 101% year over year) but with significant gains registered internationally, too, at 25% revenue growth. At the bottom line, net income edged up 7%, though earnings per share (EPS) remained flat at $0.01.

During the earnings conference call, CEO John Fieldly reported margins were reduced by a shortage of aluminum cans in which to deliver the company's energy drinks to customers. More costly imported cans were used rather than American cans for a considerable part of production, increasing expenses and holding back the potential profits from Celsius' soaring revenue. Fieldly noted the U.S. can manufacturers "expect some of the production and the capacity will come on toward the back half of 2021," and that in the meantime Celsius is focusing on optimizing its expenses to minimize the impact.

Overall, though, the report seems to show Celsius is maintaining its momentum. Highlighting that, Fieldly described the company's sales performance on America's largest online retailer, Amazon, compared to rivals Monster Beverage Corp. and privately held Red Bull. The CEO said, "Celsius sales increased 265% and our share increased by 4.5 points to 15.5% share of the category, which puts Celsius as the second-largest energy drink brand on Amazon behind Monster Energy at a 35.6% share and now above Red Bull which is at a 13.7% share." On top of this, Celsius now has distribution to retail stores in "approximately 85% of major metropolitan markets" in the U.S.

Significantly, Celsius' long-term debt remains zero, indicating the sale of stock may be a way to fund an upcoming investment in the company's expansion without resorting to loans that could negatively impact its balance sheet health long-term.

3. The company is branching out

As a maker of "calorie burning" energy drinks, with claimed benefits of one serving burning "100 to 140 calories by increasing a consumer's resting metabolism an average of 12% and providing sustained energy for up to a nine-hour period," Celsius Holdings is already positioned in a growth market. According to an early June 2021 report on the worldwide energy drink market by ReportLinker, the compound annual growth rate (CAGR) in sales of these health-related beverages is expected to be around 7.24%, indicating the market is still going strong as the COVID-19 pandemic recedes. This growth rate is expected to continue for another five years, at least through 2026. 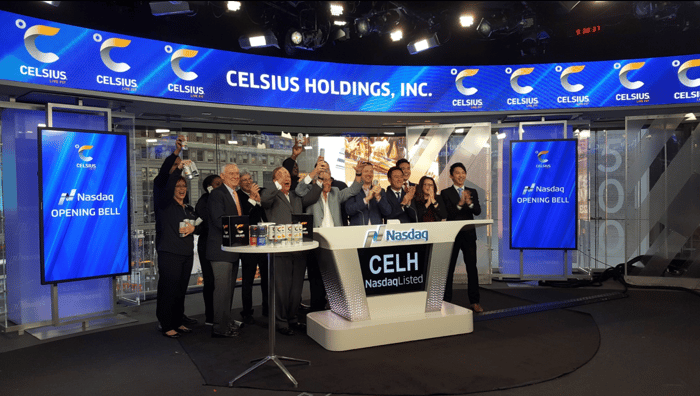 Members of the Celcius Holdings management team ring the opening bell for the Nasdaq Stock Exchange back in 2017. Image source: Celsius Holdings

However, Celsius is also branching out into related health and fitness-related product categories with its FAST protein bars and snacks brand, broadening its focus while still appealing to its existing customer base. While the bars, originally offered in Scandinavia and other areas of Europe, saw sales take a hit from COVID-19 lockdowns in Finland and supply chain issues, they still achieved 22% quarter over quarter growth between Q3 and Q4 2020, and 51% growth between Q4 2020 and Q1 2021, according to CEO John Fieldly during last month's earnings conference call. As planned, FAST protein bars are now newly available in the U.S. through Amazon, bringing the products to another major market, though the exact results of American sales won't be confirmed until Celsius' Q2 2021 report.

Fieldly says the bars tap into the "fast-growing protein snacking category, which has a lot of momentum." The world is hungry for protein bars and getting hungrier, according to Fortune Business Insights research, which shows a 5.6% CAGR through 2027, with the market reaching $7.06 billion by that year. The U.S. was already the biggest market at $2.69 billion by 2019, making Celsius' North American rollout look like a good decision, especially if, as it claims, "initial feedback has been very positive on testing" among American customers.

Despite the tendency of highly volatile stocks to underperform the market as a whole, Celsius Holdings appears to be a company bucking that general rule. Its products continue to gain in popularity, outshining even some "old standbys" as Red Bull in the e-commerce arena, and achieving distribution to most U.S. population centers. Its revenue is climbing sharply and net income will likely follow once the brake of aluminum can shortage expenses is released.

Celsius achieved its highest share price ever on the same day it fell 9% after hours following its new stock offering announcement. People investing in beverage stocks have some support for viewing this as a market overreaction because of Celsius' high volatility, or even major stakeholders taking profits.

The current pullback represents a potential opportunity for investors to bolster their position before the stock resumes its climb. The climb will be driven by solid growth, expansion into protein bars, and successful connection to the energy drink trends likely to drive vigorous growth in its chosen sector for years to come.