Please ensure Javascript is enabled for purposes of website accessibility
Log In Help Join The Motley Fool
Free Article Join Over 1 Million Premium Members And Get More In-Depth Stock Guidance and Research
By Jeremy Bowman - Jun 17, 2021 at 8:45AM

This small-cap stock has been mostly overlooked.

E-commerce stocks thrived during the pandemic. And it's not a surprise, really. With stores closed or at a restricted capacity during much of the crisis and consumers avoiding public spaces, sales at e-commerce platforms like Shopify, Etsy, and Wayfair soared. However, some of the companies are already warning of a hangover from the reopening and difficult comparisons with a year ago.

Etsy, for example, forecast revenue growth of 15% to 25% for the current quarter after posting four straight quarters of triple-digit revenue growth, and Wayfair expects revenue to decline for the quarter. Even Shopify said it anticipated some rotation in consumer spending back to offline channels and expects its growth to decelerate in the reopening.

But there's one e-commerce stock that's showing no signs of slowing down in the reopening. That's Carparts.com (PRTS -4.87%).

The online auto-parts retailer was a big winner during the pandemic, seeing web traffic triple in 2020, according to SimilarWeb, and revenue jumped 65% to $144.8 million in the first quarter. Even as brick-and-mortar retail traffic returns, the company is still experiencing a number of tailwinds that should drive its growth over the next year and beyond. In a recent interview, CFO David Meniane pointed to some of the factors that should help the company continue to scale up. 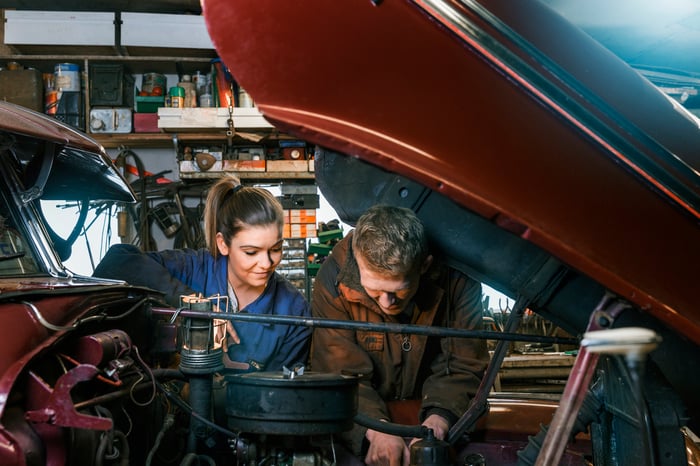 Vehicles are older than ever

The average age of a car on the road in the U.S. just reached 12.1 years, and that's a record. A combination of higher-quality, longer-lasting vehicles and skyrocketing prices for both new and used cars, due in part to the chip shortage in auto manufacturing, means that the aging-vehicle trend should to be a lasting one, according to Meniane.

Much of Carparts.com's business comes from replacement parts for vehicles that are six years or older, so the aging inventory should deliver a significant tailwind for Carparts.com over the coming years. Additionally, the economic reopening will provide a boost in vehicle-miles driven, another factor that should help drive auto-parts sales for Carparts.com and elsewhere.

In a similar way to how brick-and-mortar retailers open new stores to increase sales, e-commerce businesses must do the same with warehouses to fulfill demand for their goods. So it's a good sign that Carparts.com is rapidly expanding its distribution centers, as it needs to increase its inventory in order to grow revenue. The company just signed on to add 156,000 square feet to its new Texas distribution center, bringing the total there to 366,000 square feet.

Since opening in the fourth quarter of 2020, the Texas warehouse has experienced heavy volume and is still at only about half capacity. Meniane described this as "a great problem to have," as goods are flowing out as fast as they're coming in, which is an indicator of strong demand.

Meniane also said the company is planning to open its fifth distribution center in Jacksonville, Florida early next year, adding another 180,000 square feet. This will give the company more than 1.2 million square feet of warehouse space. He also expects another facility to follow in the Northeast. The company's goal within the next few years is to enable one-day delivery to at least 80% of the U.S. population, which will require seven to eight distribution centers.

Because of the e-commerce model, adding distribution centers not only expands the company's capacity, but also increases its delivery speed. This makes it more attractive to customers and adds to the payoff in opening new locations.

Beyond the macro tailwinds and increasing capacity, Carparts.com is also experimenting with a number of new products and features that add to the company's disruptive potential. It's testing a mobile mechanic that will come to your house to work on your car and install the parts you've ordered from Carparts.com.

It's also ramping up its assortment of hybrid- and electric-vehicle parts, an important move to gain a foothold in a fast-growing sector of the auto business. And Carparts.com is experimenting with a platform to notify customers about scheduled preventative maintenance so they can order things like air filters and brake pads on a regular schedule, giving the company a recurring revenue stream.

Carparts.com stock soared last year, but investors still seem to be overlooking the opportunity here compared to some of the higher-profile e-commerce companies. The growth stock is trading at a price-to-sales ratio of just 1.6, making it look very affordably priced for a fast-growing company with a huge addressable market that's targeting 20% to 25% annual revenue growth over the long term.

If the company can execute on its strategy, the stock has a lot of room to run.

1 E-Commerce Stock That Isn't Slowing Down