Please ensure Javascript is enabled for purposes of website accessibility
Log In Help Join The Motley Fool
Free Article Join Over 1 Million Premium Members And Get More In-Depth Stock Guidance and Research
By Jeremy Bowman - May 14, 2021 at 7:05AM

This high-growth small-cap stock continues to be overlooked.

E-commerce stocks have been big winners over the last year, but some have gotten more attention than others.

CarParts.com (PRTS -4.87%) surged in the early stages of the crisis as sales from the small-cap stock formerly known as U.S. Auto Parts ramped up, riding tailwinds in both e-commerce and auto parts.

However, over the last few months, the stock has traded sideways as investors seem to believe its growth will soon normalize. The analyst consensus for 2021 revenue growth is just 11%, for example, following 58% top-line growth last year.

CarParts.com blew past analyst estimates in its first-quarter earnings report, reporting revenue growth of 65% to $144.8 million compared to expectations of $117.5 million. Shares gained 11.4% on the news, but the results point to enduring momentum from the company rather than just the pandemic-driven bounce that the market had already priced in. Let's take a closer look at some of the key drivers in the quarter. 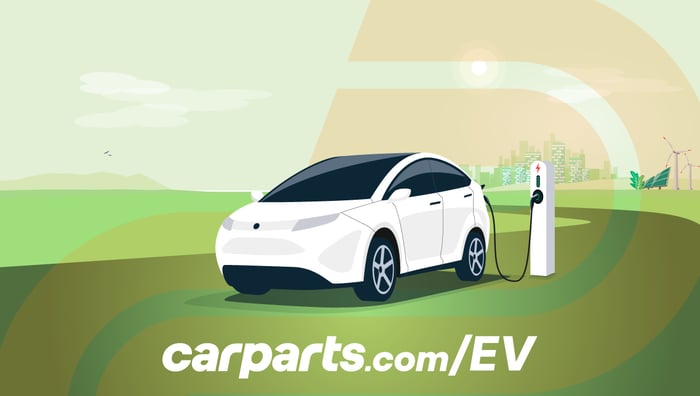 Sales have been strong across the auto parts industry during the pandemic, and that momentum shows no signs of slowing down. Another round of stimulus checks in March helped drive strong growth in the category, but the main reason that auto parts demand remains strong is that prices for both new and used cars have soared during the pandemic, with a global chip shortage the latest explanation.

According to JD Power, used car prices are up 17% since the start of 2020 while new car prices have risen 10%, dissuading Americans from buying new cars and instead leading to them fixing up their current set of wheels. CEO Lev Peker noted on the earnings call that average new car prices are now above $40,000 for the first time ever, and the average age of cars on the road is now 12 years, which further drives demand for aftermarket parts.

While 65% revenue growth shows the business is rapidly expanding, sales growth could be even faster if the company had more warehouse space, as it's been constrained on the supply side, not by demand. The company is ramping up operations at its new distribution center in Texas, which is now 60% full, and is in talks to add 156,220 square feet to the Texas distribution center, which would bring total capacity in the system to more than 1 million square feet.

Revenue grew about 20% from the fourth quarter, a reflection of the additional capacity from the Texas distribution center. The company plans to add two more centers in the next year or two, bringing its total to seven and paving the way to more growth. Opening new distribution centers not only expands the company's fulfillment capacity, but helps speed up delivery, bringing the company closer to its goal of one-day delivery for 80% of the country.

Beyond the near-term momentum, CarParts.com has a number of catalysts that should drive longer-term growth. The company is targeting 20% to 25% compound annual revenue growth over the long term and an 8% to 10% adjusted EBITDA margin. CarParts.com has traditionally sold replacement parts for the auto body like mirrors and fenders, but is now moving into mechanical parts like brakes and fuel pumps, which opens up a larger addressable market.

Currently, about a quarter of sales come from mechanical parts, but management believes that will eventually grow to half of its sales, indicating ample room for growth.

The company is also beta-testing a mobile mechanic, or sending a mechanic to a customer's home to perform repairs, an innovation with significant disruptive potential.

The company doesn't provide quarterly guidance, but momentum looks strong heading into the second quarter. COO David Meniane said on the earnings call: "We feel really good about Q2," noting the increase in inventory, the expansion in Texas, and other investments in the supply chain.

Following the earnings report, the company trades at a price-to-sales ratio of just 1.6, lower than other direct online retailers like Wayfair and Chewy, which are priced 2.3 and 4.1 times sales even as both companies are set to lap pandemic booms.

Sales growth for CarParts.com should remain brisk as long as constraints in the auto market remain, and if the company can execute on its long-term goals, including 20% to 25% revenue growth, the stock should have significant upside from here.

1 E-Commerce Stock That Isn't Slowing Down