Please ensure Javascript is enabled for purposes of website accessibility
Log In Help Join The Motley Fool
Free Article Join Over 1 Million Premium Members And Get More In-Depth Stock Guidance and Research
By Brett Schafer - Jun 17, 2021 at 8:22AM

The company is trying to reverse its fortunes with this shooter franchise.

On June 9, Electronic Arts (EA -0.53%) announced the newest game in its Battlefield franchise. Called Battlefield 2042, the game will be available on Oct. 22 on all the major consoles and is the first title in the franchise released since 2018. Here's why the game is poised for success, and what it might mean for Electronic Arts shareholders.

Battlefield 2042, as the title suggests, is based in a futuristic world. And like every other first-person shooter game, there seems to be a lot of war going on. According to EA, there will be three game modes for players. The first is a traditional multiplayer mode that can be played with up to 128 other people if you are on the newest Xbox and Playstation consoles. 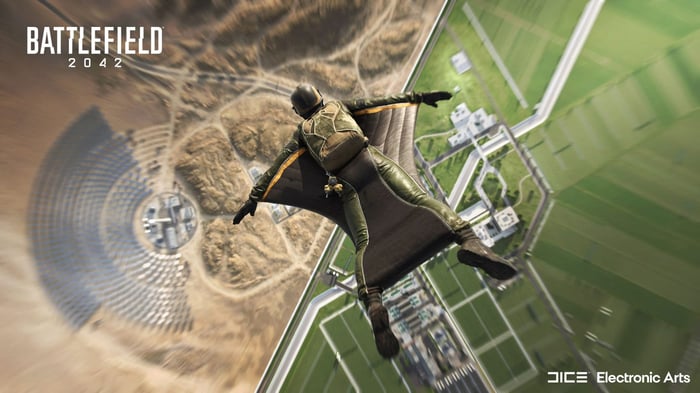 With the two other gameplay functions, EA is keeping the details relatively secret until its EA Play Live event in July. What we do know is that one of the game types is called Hazard Zone and is a "squad-based" game. This sounds familiar to the battle royale concept that has taken over the gaming world after the success of Fortnite, Call of Duty: Warzone, and Apex Legends (which EA also owns). Similar gameplay could prove popular with Battlefield as well. The third concept is unnamed, but EA called it a "love letter to Battlefield fans" in the press release.

Why it is poised for success

There are a few reasons why Battlefield 2042 can be a successful game for EA. For one, the last Battlefield, called Battlefield V, was a huge disappointment, garnering only 7.3 million players worldwide. This newest game hasn't come out yet, but the trailer got a lot more positive feedback than Battlefield V, which as of this writing has 582,000 dislikes on YouTube and only 362,000 likes. Since its release only a few days ago, the Battlefield 2042 trailer already has 875,000 likes and only 21,000 dislikes. While more qualitative, this shows the hardcore gaming community is extremely excited about the new game.

Second, there is currently an industry tailwind for high-quality console games with the release of the new Xbox and Playstation video game consoles. These consoles, with better graphics and processing capabilities, should make playing games like Battlefield 2042 even more enjoyable for users.

Lastly, Battlefield 2042 should get a large boost from the evolution of shooter games over the last few years. Nowadays studios are more focused on in-game transactions and cosmetic upgrades, which has led to more consistent revenue and less of a reliance on one-time game purchases. EA has already had massive success in this category with Apex Legends, which crossed $1 billion in lifetime bookings last quarter. The company has another chance to lean on in-game purchases and recurring upgrades with Battlefield 2042, but we'll see what strategy the company ultimately decides to go with.

What it means for Electronic Arts

For this fiscal year (which ends in March 2022), EA is guiding for $7.3 billion in net bookings (the revenue equivalent for video game companies). This would mean around 18% growth from last year. Most of its business will still come from EA Sports, specifically FIFA soccer and Madden NFL, while Apex Legends should continue putting up rapid growth. Investors should remember that EA made two sizable recent acquisitions of Codemasters and Glu Mobile, which is included in that bookings growth guidance as well.

If Battlefield 2042 is a success, that could be the deciding factor as to whether EA can beat its $7.3 billion bookings guidance. Let's run some quick numbers to show why that could be the case. If this game has 7.3 million players who on average spend $70 with the game, that would be around $500 million in lifetime bookings. But if it can hit 25 million players like Battlefield 1 did back in 2016, that is $1.75 billion in potential bookings for EA, a huge difference in customer spend. Not all of this will come in one fiscal year, and it would take a massive hit to ever get as big as FIFA for EA, but if Battlefield 2042 is successful it can help EA beat its $7.3 billion bookings guidance for this fiscal year. This, in turn, should help build momentum for the stock over the next few years.