Please ensure Javascript is enabled for purposes of website accessibility
Log In Help Join The Motley Fool
Free Article Join Over 1 Million Premium Members And Get More In-Depth Stock Guidance and Research
By Bram Berkowitz - Jun 17, 2021 at 6:01AM

The JPMorgan Chase CEO said he doesn't think inflation is transitory, but he also said rates could be low long-term, a situation that could create an ideal economy.

Inflation has spooked many investors in recent months, and it's been the main topic of debate among those following the stock market. Many economists and experts believe fears of inflation are overblown and could very well be temporary; they say recent price increases are related to pandemic-related factors such as excess stimulus and the reopening of parts of the economy that have largely been shut down till now. Some of that sentiment may have changed after the Federal Open Market Committee signaled on Wednesday that it now expects to start raising its benchmark federal funds rate in 2023 instead of 2024, suggesting inflation may not be as temporary as some think.

Everything JPMorgan Chase (JPM 0.27%) CEO Jamie Dimon has said, as well as recent actions by the country's largest bank, suggests that Dimon also may believe inflation is here to stay. But if the scenario Dimon seems to be envisioning plays out, it may not be as bad as some think. Let me explain.

Dimon is arguably the world's most influential banker, having been at the helm of JPMorgan since 2006. He helped navigate the bank through the Great Recession better than any large U.S. bank, and in my opinion, he did the same during the brunt of the coronavirus pandemic.

At a recent conference, Dimon made his feelings on inflation very clear, saying, "I think you have a very good chance of inflation being more than transitory." But Dimon is also walking the walk on this stance when you look at the actions JPMorgan Chase has taken. 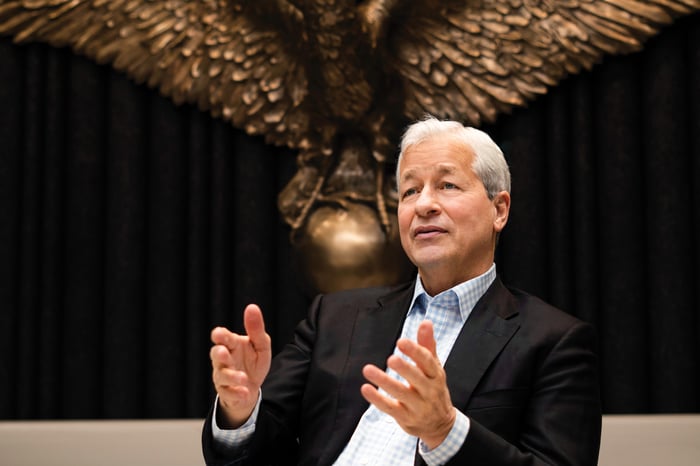 Dimon announced that the bank had revised its guidance downward for net interest income and is now only projecting to generate $52.5 billion for 2021, down from initial guidance of $55 billion. Banks make net interest income from interest paid on loans and returns on securities they invest in. Dimon said a big part of this net interest income revision is due to the bank's decision to not reinvest proceeds into securities at their current yields. This is significant because analysts and investors typically don't take too kindly to downward revisions, so Dimon must believe the long-term outlook significantly outweighs short-term results.

Most banks will invest deposits into securities if they have excess liquidity and not a lot of loan growth, which is exactly what banks have been dealing with for nearly a year now. While the types of securities banks invest in don't pay out as high an interest rate as loans, it's better than no yield at all. JPMorgan has essentially been stockpiling cash and now has $500 billion of cash practically earning zero yield because Dimon is being patient, waiting for opportunities to reinvest cash at better rates. When you invest in securities, that money is typically locked in at the rate you invest in, so Dimon doesn't want to lose any potential benefit when rates do start to rise. At the end of the first quarter of the year, JPMorgan estimated that the bank would reap an additional $6 billion in net interest income over the next year if the Fed raised the benchmark federal funds rate by 1 percentage point.

Now typically, inflation leads to rate hikes and the Fed has now accelerated its timeline for rate hikes by a full year, but interestingly, Dimon also said during the conference, "we do expect rates to stay low" for the long term. What Dimon could be saying here is that while rates will rise, they will in general stay low compared to where they've been in history, perhaps similarly to the last decade, where the federal funds rate topped out near 2.5%. This could suggest Dimon doesn't expect to see runaway inflation, although keep in mind this seems to be a fluid situation.

What is Dimon possibly hinting at?

Based on JPMorgan's cash hoarding and willingness to let the net interest income guidance drop by $2.5 billion, Dimon likely thinks that either rate hikes could come sooner than expected, or maybe that inflation will push long-term rates higher by the end of the year, at which point reinvesting cash would make more sense. He said he hasn't yet seen much evidence for loan growth, although at some point it likely has to happen.

I found Dimon's comment about rates staying low for the long term interesting, because if he thinks inflation is not transitory and that rates will stay generally low, that could support a comment Dimon has previously made about the potential for a "Goldilocks" economy. In this scenario, inflation and rates rise enough for the economy to realize low unemployment or even full employment, while maintaining strong economic growth. This would also be the most ideal situation for banks because they would be able to reap the benefit of higher net interest income and maintain strong loan demand, although it's still too early to tell if a "Goldilocks" economy will unfold.

As Dimon said, "You will just find out one day where we made the right decision or not."