Please ensure Javascript is enabled for purposes of website accessibility
Log In Help Join The Motley Fool
Free Article Join Over 1 Million Premium Members And Get More In-Depth Stock Guidance and Research
By Daniel Sparks - Jun 17, 2021 at 9:17AM

Reports are circulating this week that electric-car maker Tesla (TSLA 0.13%) could potentially agree to share its Supercharger network with other automakers in Germany. With more than 25,000 Superchargers globally, spread across more than 2,700 Supercharger stations, Tesla has the world's largest network of rapid chargers for electric vehicles (EVs).

The charging network is arguably a competitive advantage for Tesla, as it makes long-distance traveling easy and convenient -- something that can't be said for many of the EV-maker's competitors. But if Tesla began sharing its network with other automakers, could it help them play catch-up and ultimately eat into Tesla's growth opportunity? 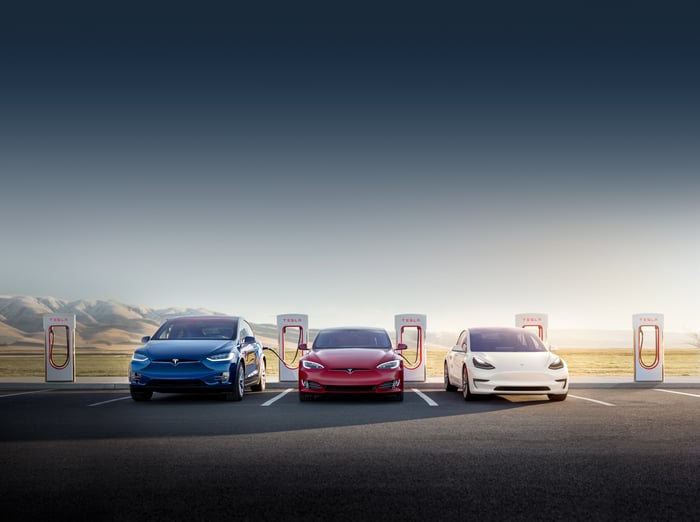 "I am in direct contact with manufacturers such as Tesla in order to ensure that the existing infrastructure, for example Tesla Supercharger, is also opened up to other manufacturers," said Federal Transport Minister Andreas Scheuer in an interview for a German newspaper on Tuesday. Though the minister admitted that there are some technical issues to address before it can come to a resolution with Tesla, the goal would be that there's "barrier-free use of the charging stations of all providers for all e-cars," Scheuer said.

If Tesla opens up its charging network to other EV manufacturers in Germany, those car brands would have an equally-as-convenient solution for long-distance travel. But there would likely be a positive impact on Tesla from the move -- one that could more than offset the loss of any competitive edge from keeping its chargers to itself: The convenience of a shared network would likely help EVs gain more traction with consumers, creating awareness and ultimately more demand for the newer vehicle technology.

It's important to remember that EVs are still a sliver of the overall market: 97% of vehicles sold globally in 2020 were internal combustion (ICE)-powered vehicles. With such low market share, anything that helps fuel greater mass-market adoption of EVs could prove to be a significant catalyst for Tesla. This is why Tesla isn't focused on competition in the EV space but rather the massive market for ICE vehicles.

Tesla actually offered to provide automakers access to the company's Supercharger network more than five years ago. Revealing the offer at Tesla's annual shareholder meeting, CEO Elon Musk told investors that doing so would help validate the feasibility of EVs.

The catch? Automakers tapping into the network would have to help pay their share of operating expenses related to the network. If opening up the network in Germany would lead to a similar arrangement, these shared economics could be another potential benefit for Tesla.

While it's impossible to know what the impact a shared Supercharger network would have on Tesla's competitiveness, it's safe to say that it's unlikely to negatively impact the company's long-term growth prospects in any meaningful way. Furthermore, it's more likely that it would help Tesla.