Please ensure Javascript is enabled for purposes of website accessibility
Log In Help Join The Motley Fool
Free Article Join Over 1 Million Premium Members And Get More In-Depth Stock Guidance and Research
By Adria Cimino - Updated Jun 18, 2021 at 10:14AM

The news may reinforce Moderna's and Pfizer's vaccine-market dominance.

Moderna (MRNA -3.78%) and Pfizer (PFE -1.18%) aren't the only mRNA coronavirus vaccine makers in town. In fact, another company has been gaining ground -- and reported pivotal trial results this week. I'm talking about German biotech CureVac (CVAC 0.44%).

Even though CureVac is a latecomer, investors still have closely followed the company's vaccine story because it could be a big supplier in Europe. The European Commission already has signed an advance purchase agreement for as many as 405 million doses from the company.

However, 12 words from the company's CEO this week may mean billions of dollars for Moderna and Pfizer... and a lot less for CureVac. 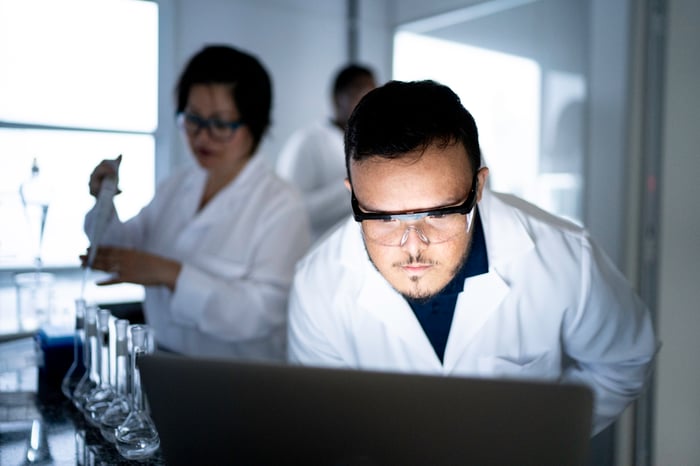 "Demonstrating high efficacy in this unprecedented broad diversity of variants is challenging," CureVac CEO Franz-Werner Haas said when reporting the interim trial analysis. He said the vaccine candidate showed 47% overall efficacy against COVID-19. CureVac said the existence of at least 13 variants found in the study population weighed on efficacy.

The vaccine candidate didn't meet prespecified criteria for success. And the trial didn't allow CureVac to draw a conclusion on efficacy in the over-60 age group. This element is particularly bad news, since older people have been most vulnerable to the coronavirus.

By comparison, Moderna and Pfizer both reported overall efficacy of more than 90% in a six-month follow-up report from their phase 3 clinical trials. Their real-world data also is compelling. For example, a Centers for Disease Control and Prevention study of both vaccines in about 4,000 people found them to be 91% effective.

CureVac hasn't shut the door on the future of this vaccine candidate, though. The company said it plans on conducting a final analysis when 80 more cases accrue. The latest analysis included 134 cases. At that point, the company said efficacy data may change. CureVac is waiting for this final analysis before deciding on a regulatory pathway.

That said, things aren't looking bright for the CureVac candidate. While efficacy results may indeed change, a huge difference would be surprising. For example, in the Moderna and Pfizer results, efficacy data remained close from the first analysis, even through the most recent. And that's over a six-month period. Moderna initially reported 94.1% efficacy in November. That compares with "greater than 90%" today.

How does this equal billions?

How could all of this equal billions of dollars for Moderna and Pfizer? If CureVac's candidate doesn't win authorization, it can't supply Europe with the promised vaccine doses. And that means the European Commission may seek a contract for those 405 million doses elsewhere.

Europe has already struggled with vaccine supply due to materials shortages and production delays. Even worse, many countries rejected AstraZeneca's and Johnson & Johnson's vaccines after cases of rare but deadly blood clots in some vaccinated individuals.

Pfizer has started to benefit from those troubles. The European Commission last month ordered 900 million doses from the big pharma company -- with an option for 900 million more. That's in addition to the 600 million it already ordered from Pfizer for delivery this year. This new order is for delivery through 2023.

The European Commission president said that other contracts with other players would follow. And that happened before CureVac announced its trial data. So it's clear that if the European Union deal with CureVac falls through, a potential order may be up for grabs.

Of course, CureVac may report better news at the next analysis, and the European Commission may go ahead with the plan for doses. But I'm not counting on it. The latest news from CureVac is more likely to lead to more orders -- and more revenue -- for Pfizer and/or Moderna.

That would reinforce their market dominance. Over time, that dominance likely will fuel lasting share-price gains.