Probably not, but things could still get complicated.

Sometimes, it pays big to bet on an upset. When the U.S. Food and Drug Administration (FDA) approved Biogen's (BIIB 0.63%) drug Aduhelm for Alzheimer's disease on June 7, its stock immediately popped nearly 64%, rewarding shareholders who had stayed the course through the long and difficult approval process.

With the Aduhelm victory fresh in hand, Biogen could be paving the way for other Alzheimer's therapies to follow, finally cracking the ice of the difficult-to-treat disease. At the same time, it's important to recognize that investing in a stock right after it shows itself to be a no-brainer is a great way to overpay. So, is it too late to catch the boat with Biogen, or is Aduhelm's rise to prominence only beginning? 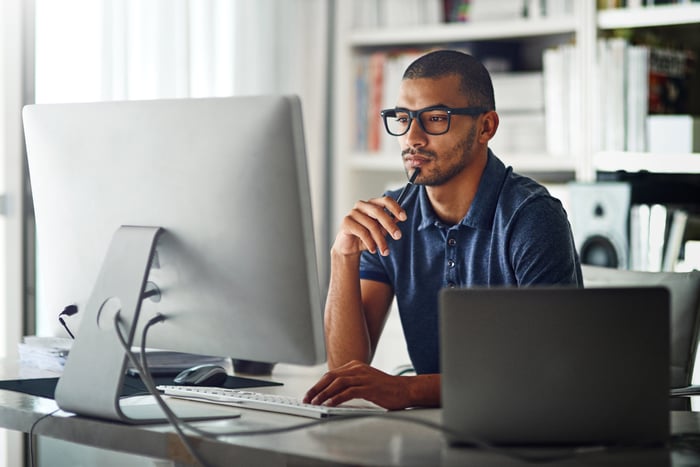 Why it could be too late

There's one simple reason why it might be too late to buy Biogen stock. Aduhelm won't be getting approved to treat Alzheimer's disease again, as the FDA gave it a very broad approval which permits its use in 100% of patients. Even if it does eventually get approved for use in another indication outside Alzheimer's, it won't be doing so in the context of extreme pessimism about its chances of approval like it did originally.

In short, leading up to the drug's approval, the market had priced in the prospect of a rejection from the FDA, leaving Biogen's stock lower than it would be otherwise. That expectation was entirely reasonable, given that the agency's advisory panel (which doesn't issue any binding decisions about approvals) panned Aduhelm and claimed that there wasn't sufficient evidence to support its efficacy. So, when the FDA gave Aduhelm an accelerated go-ahead for commercialization, there was a large gap between the market's prior expectations about the drug and the actual outcome.

But moving forward, there won't be that kind of discrepancy to benefit new investors. Instead, growth in the stock will stem from earnings reports that reflect sales of Aduhelm as well as progress in other pipeline projects. 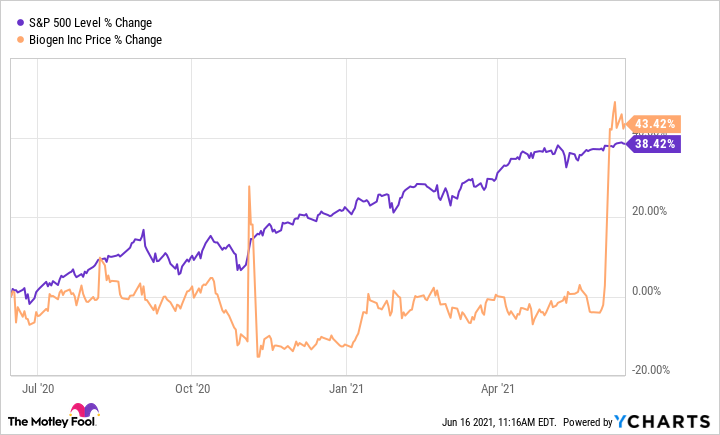 Peak revenue from Aduhelm could be as much as $10 billion per year if Biogen can deeply penetrate the market of 6 million patients with Alzheimer's in the U.S. Even if the market is anticipating an avalanche of cash, it's still possible for revenue estimates to be lower than the actual volume of sales. In other words, new shareholders might get some of the benefit of the approval, provided that Biogen outperforms expectations.

Then there's the fact that Biogen isn't a one-trick pony. Aduhelm is only its latest drug to hit the market, and it's not the only Alzheimer's drug that it has in the pipeline. The company just enrolled the last patient in its upcoming phase 3 clinical trial for its drug lecanemab, which is also intended for Alzheimer's. In total, Biogen has six phase 3 programs and a plethora of other projects in earlier phases. This means that in the long run, there's no shortage of growth opportunities -- nor does it lack incoming revenue at the present moment. Its multiple sclerosis drugs that are already on the market netted the company $1.7 billion in the first quarter.

I don't think that it's too late to buy Biogen, but investors need to be realistic about the stock's prospects.

Aduhelm could become an enviable cash cow which might drive returns for investors who buy right now. But the conditions surrounding the drug's approval mean it's hardly a risk-free purchase, and it would be too hasty to think that massive sales revenue is guaranteed after the first couple of years. The initial surge the stock enjoyed from the approval is over, and its future growth will be slow in comparison, because the market has likely priced in the impact of the future revenue by now. Plus, Biogen may not be fully in the clear with Aduhelm, even if it can commercialize the drug.

The FDA is requiring the company to perform additional efficacy studies to confirm that the drug actually works. If those studies fail to show a firm benefit, it'll spell major trouble for shareholders. First, it'll be harder to command a high selling price for Aduhelm if it isn't clearly beneficial to patients. Right now, the drug could be priced as high as $56,000 per year. Poor efficacy could pull margins lower, but the real risk is that doctors will hesitate to prescribe an expensive and dubiously effective drug, thereby driving down sales.

Second, it's possible for the drug's approval to be rescinded, which would be an even larger disaster. Alternatively, if the drug ends up being covered by Medicare in the U.S., the government could revoke coverage. Prices would need to then fall significantly to maintain the same level of market penetration.

Nonetheless, it'll be at least a few years before Biogen's post-approval studies could report anything notable. So, if you decide to buy Biogen right now, consider keeping your investment on the smaller side to account for the risks ahead, and try to stay abreast of any ongoing regulatory activity.