It's not all "diamond hands" out there. Some so-called meme stocks are being sold, with names like Sundial Growers (SNDL -3.47%), electric vehicle maker Arrival (ARVL 3.68%), and Ethan Allen Interiors (ETD 1.77%) all dropping today. All three were down between 5% and 15% earlier in the session. As of 1 p.m. EDT, however, shares of these stocks moved as follows:

Wait, you might be thinking, when did a furniture maker join the ranks of meme stocks? Well, this furniture maker has the honor of using the stock symbol "ETH," which is also the symbol used for the increasingly popular Ethereum (ETH -0.20%) platform, where the cryptocurrency Ether resides. 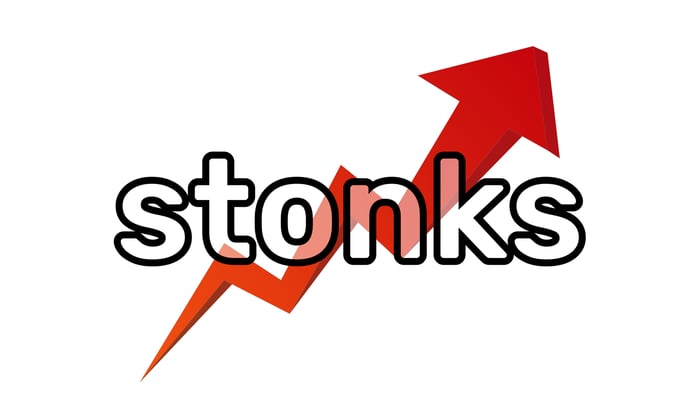 Ethan Allen may not even cross the grey line that determines what is, or isn't, a meme stock. But it's 30-day average daily trading volume has jumped more than 35% in the last three months, as short interest in the stock has also grown. As of the end of May, more than 5% of the public float was held short, according to MarketWatch.

That doesn't make it a great candidate for the short squeezes WallStreetBets (WSB) users seem to seek out, but that might not matter thanks to its stock symbol. One Reddit user on the WSB forum commented that they hoped there was a big short holding on Ethan Allen "because it would be so great to read all the headlines about the ETH of the stock market pumping."

That sums up the mentality of this group of retail traders well. Arrival garnered interest just this week from that trading crowd. This led to a jump in the shares of the electric vehicle start-up earlier in the week. That interest seems to be waning today.

Canadian cannabis company Sundial Growers is not new as a Reddit favorite. The stock jumped more than 12% in the month of May, even after it gave a mixed financial update for its 2021 first quarter. Sales have been slowing, and Sundial said gross revenue was down 30% versus the previous quarter ended Dec. 31, 2020. A lower product selling price has been hurting revenue, but Sundial has also been using cash on its balance sheet to make acquisitions that should help it grow market share.

But those fundamentals don't generally concern WSB followers. For now, though, these meme stock names aren't being pumped up by the online traders. Today, there are more sellers than buyers of these so-called "stonks."