Please ensure Javascript is enabled for purposes of website accessibility
Log In Help Join The Motley Fool
Free Article Join Over 1 Million Premium Members And Get More In-Depth Stock Guidance and Research
By Will Healy - Updated Jun 22, 2021 at 9:28AM

Trying to profit from the company's technical lead could actually cost new investors.

Taiwan Semiconductor Manufacturing (TSM 0.78%) has powered its way to impressive returns, especially in the past couple of years. The willingness for fabless chip companies to outsource their chip manufacturing work to TSMC as well as a burgeoning technical lead the company has developed have both been beneficial to this semiconductor specialist.

However, investors may want to rethink opening new positions in this company's stock considering there are three notable dangers the company is facing. What dangers? Let's take a closer look.

TSMC has generated significant investor returns by playing its part in powering a digital revolution. In the last year alone, the stock price has risen by almost 120%. Over 10 years, that return exceeds 810%. 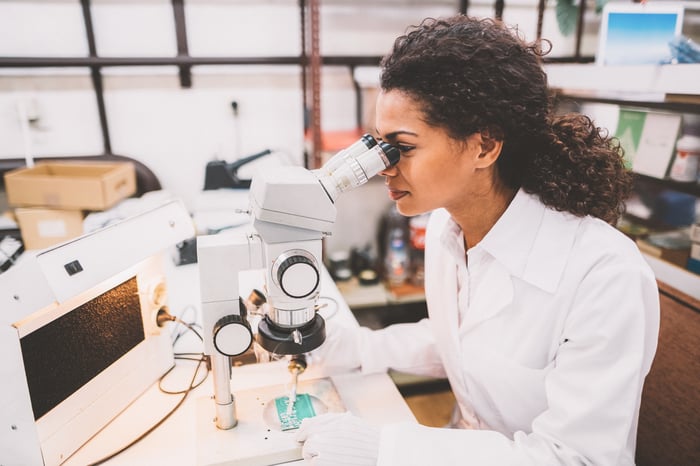 Rising profits continue to fuel this stock price increase. In the first quarter of 2021, net income surged 19%, driven largely by a 17% increase in revenue. That actually represented a decline as net income for fiscal 2020 rose 50% compared with 2019 levels. During that time, revenue climbed by 25%. Costs fell short of this level, with the cost of revenue increasing by 9% and operating costs surging by 21%.

Unfortunately, such increases have also taken the company's valuation close to 10-year highs. TSMC stock now sells for about 34 times earnings. In fairness, that still makes it much more reasonable than its client NVIDIA, which sells for around 85 times earnings. It also closely matches Advanced Micro Devices' P/E ratio of 35.

Still, this amounts to a significant increase from the 22 P/E ratio of one year ago or the 10 multiple it reached in 2015. Also, it should be noted that chipmakers that own fabs tend to maintain lower multiples. Texas Instruments (TXN 0.01%) sells at a 29 P/E ratio, while Intel (INTC 0.64%) trades for 13 times earnings.

Much of TSMC's profitability was driven by a chip shortage over the past year or so. While a lack of available chips brings favorable pricing in the near term, it also tends to prompt production increases. As semiconductor companies work off the shortage, chip prices will probably fall. This factor will cut into revenue growth at a time when capacity increases take its costs higher.

Nonetheless, many of the company's peers such as Samsung and Intel have pledged to expand fabs and build new ones. Also, TSMC has had to follow suit as it cannot meet the current demand. In the first-quarter 2021 earnings call, the company pledged to invest $100 billion over the next three years to add capacity.

TSMC will also receive some help with capacity increases with its fab under construction in Arizona, according to Bloomberg. Thanks in part to a subsidy, TSMC will manufacture 5-nanometer chips close to key U.S. customers, producing an estimated 20,000 chips per month.

Unfortunately, the Arizona facility will account for less than 2% of TSMC's production, which amounted to 12.4 million wafers in 2020. This occurs at a time when foreign governments have become increasingly concerned about Taiwan becoming the Saudi Arabia of chip production. Taiwan currently accounts for 65% of the world's semiconductor manufacturing, according to TrendForce.

Like Saudi Arabia, Taiwan faces significant political turmoil, especially with China's renewed threats to reclaim what it considers its rogue "province." Such a risk infers that TSMC should trade at a discount.

Moreover, considering the economic and national security implications of such an event, the U.S. Senate has approved $52 billion in subsidies for America's chip industry. This will probably favor U.S. producers that own fabs such as Intel and TI.

Not only will the subsidy encourage the construction of fabs in the U.S., but it may also help companies like Intel regain a lost technological edge. For now, Intel will have to bridge a substantial gap. It stated that it will not deliver a 7nm chip to market until 2023, something TSMC first accomplished in 2018.

TSMC's technical lead amid a chip shortage and a rising stock price has made it a relatively expensive investment. This has occurred at a time when rising production will probably reduce its revenue per chip. It has also happened as foreign governments work to divert chip production away from Taiwan amid economic and geopolitical concerns. Considering these dangers, TSMC is a chip stock that investors may only want to consider if it's sold at a discount.