Please ensure Javascript is enabled for purposes of website accessibility
Log In Help Join The Motley Fool
Free Article Join Over 1 Million Premium Members And Get More In-Depth Stock Guidance and Research
By Daniel Foelber, Scott Levine, and Lee Samaha - Jun 20, 2021 at 7:00AM

These hidden gems are a bargain even at today's prices.

Another day, another all-time high. The U.S. stock market is on fire and showing no signs of slowing down. When times are this good, it can be easy to get complacent and forget about fundamentals. Or worse, fall prey to the hype of meme stocks and other fast-money facades.

With that, we asked three of our Motley Fool contributors which companies looked cheap despite the market's run-up. They reached into the bargain bin and pulled out Lockheed Martin (LMT -0.51%), Brunswick (BC 0.40%), and Royal Gold (RGLD 0.26%). Here's why each of these established businesses could be worth buying now. 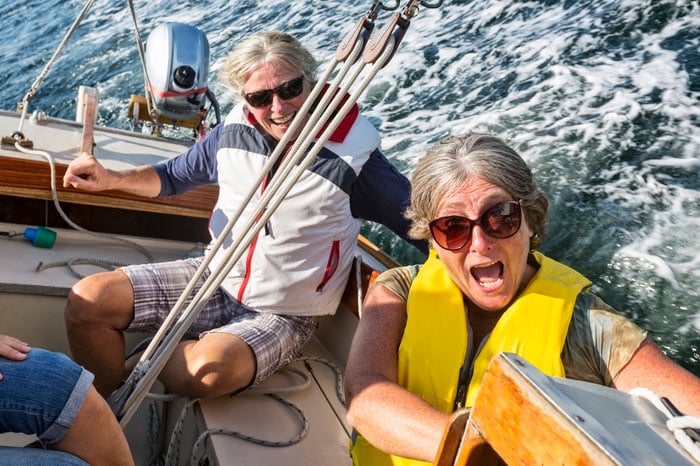 So much good, and so little bad

Daniel Foelber (Lockheed Martin): Shares of Lockheed Martin are up 7% so far in 2021. It's a nice return until you compare it to the S&P 500, which is up over 11% for the year. In fact, Lockheed and its peers have heavily underperformed the market over the past three- and five-year periods.

Lockheed posted record-high revenue, net income, and free cash flow (FCF) in 2020. Given its dominant performance, investors might be scratching their heads as to why Lockheed is so cheap. After all, its price-to-earnings ratio is just 15.3. And its quarterly dividend was raised to $2.60 a share, putting the annual yield at 2.7%. With plenty of FCF to support the dividend, Lockheed has the makings of a top-tier income stock.

Despite all of these attractive qualities, Lockheed is prone to one of Wall Street's biggest fears: slowing growth. It does most of its business with the U.S. government. Even though the overall federal budget has increased, defense spending has largely stagnated in recent years. The company has been able to rise above this challenge. Over the last five years, it has increased revenue at a compound annual growth rate (CAGR) of 6.7%, net income at a CAGR of 5.7%, and FCF at a CAGR of 9%.

However, the White House has requested $715 billion for the Pentagon for its fiscal year 2022, which is just 1.6% higher than what was spent in the prior-year period.

Although orders for some of Lockheed's products increased, prolonged periods of low defense spending are certainly a headwind. The company is doing what it can to overcome this challenge. Investments in hypersonic missiles, satellites, and nuclear defense programs make up its space segment, which could be one of its main sources of growth. Its efforts have even garnered interest from famed growth investor Cathie Wood. Given all the positives, Lockheed seems like a steal at its current price.

Lee Samaha (Brunswick): This marine leisure company is best known for its leading boat brands (Sea Ray, Bayliner, and Boston Whaler), but it makes most of its money from propulsion (Mercury outboard motors) and parts and accessories.

That's a pivotal point to understand because the explosion in interest in boating created by the pandemic, and the associated boat sales, could create a long-term growth opportunity for Brunswick's propulsion and aftermarket sales. In fact, due to the surge in interest in marine leisure activity, Brunswick is running ahead of its three-year targets laid out at the start of 2020.

While there's no guarantee that the interest in marine leisure will stay quite as strong in the post-pandemic environment, Brunswick's valuation appears to have a fair margin of safety built into it. Based on the current share price of around $94, Brunswick trades on just 11 times 2022 estimates. That's too cheap for a company that has good long-term prospects.

There's gold in the bargain bin

Scott Levine (Royal Gold): Follow the investing world, even superficially, and you're likely familiar with the fact that when market volatility rears its ugly head, investors frequently flock to gold for protection. In times like these, however, with the market consistently flirting with all-time highs, the conventional wisdom would be that there's nothing alluring about the precious metal.

It's not surprising, therefore, that the price of gold has dipped about 2% since the start of June. But looking to gain exposure to gold now is exactly the type of contrarian thinking that could lead to substantial gains.

You can put your car keys down -- I'm not suggesting you run out and start buying gold coins. A better approach to investing in the metal is a royalty and streaming company like Royal Gold. By providing the money to assist with mining, these companies don't take on the extensive risks that mining companies face in developing their assets, thus offering a less risky investment opportunity.

For those unconvinced that picking up shares of Royal Gold is a more compelling option than hoarding bullion, consider the fact that over the long term, Royal Gold, which generated 79% of its revenue from the metal in 2020, has significantly outperformed the rising market price of gold. 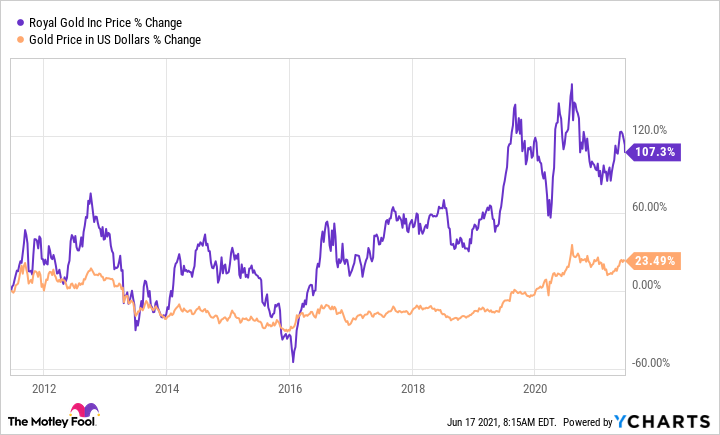 Of course, this doesn't ensure that the company will perform similarly in the future, but it's certainly worth noting; it's also important to recognize that the stocks of mining companies are highly correlated to movements in the price of gold.

In terms of what's coming down the line, Royal Gold has a robust pipeline of projects in development that will help it achieve growth. Currently, the company's portfolio includes 41 operating assets and 146 in varying stages of development.

Fortunately, gold bugs won't have to cough up a lot of green to pick up shares of Royal Gold. The stock is currently changing hands at 20.7 times operating cash flow, representing a discount to its five-year average multiple of 22.3. Think that all gold stocks are on sale now due to the recent dip? Think again. Shares of Franco-Nevada, another leading royalty and streaming company, are a little pricey; the stock trades at 34.6 times operating cash flow -- a premium to its five-year average ratio of 31.7.