Please ensure Javascript is enabled for purposes of website accessibility
Log In Help Join The Motley Fool
Free Article Join Over 1 Million Premium Members And Get More In-Depth Stock Guidance and Research
By Billy Duberstein – Jun 20, 2021 at 9:00AM

A new restrained, shareholder-friendly operational posture in U.S. oil could lead to monster payouts at these prices.

Despite being one of the strongest sectors in the market this year, the energy sector is still out of fashion with investors. Zooming out and taking a longer-term view, it's clear that the energy sector has been a huge laggard even after its recent bounce to start 2021. 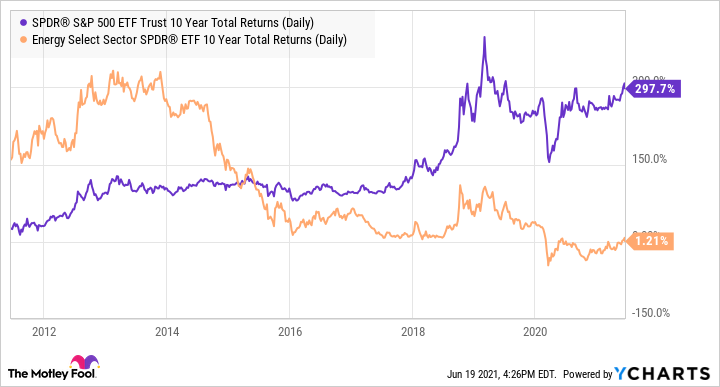 Yet could things be changing? In the wake of the pandemic, and amid the rise of electric vehicles, U.S. shale producers appear to have have widely adopted a new operating and capital allocation paradigm. Major producers have consolidated, cut costs, and plan on limiting their production growth, milking assets for cash flows, and paying most of it out as dividends. As a result, U.S. oil companies' dividends could soar as the economy recovers.

Pioneer Natural Resources (PXD 0.63%), with the lowest costs per barrel in the Permian basin, has announced its adoption of this new paradigm and stands a great chance of generating tremendous cash flow at current oil prices. As a result, management predicts its current 1.4% dividend could climb sixfold over the next two years, should oil prices stay near current levels. 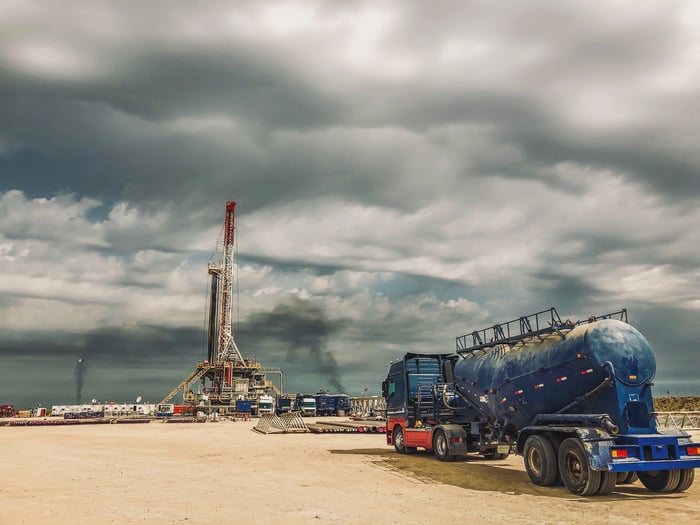 Pioneer follows others to limit production and pay a variable dividend

Like some of its U.S. peers, Pioneer is adopting a new operational paradigm of limiting production growth to 0-5% per year, which will lower capital expenditures and generate free cash flow. Also like others, Pioneer has announced a "fixed-plus-variable" dividend beginning in 2022.

That assures investors should know what to expect, and the company will be able to keep ample liquidity on its balance sheet. The dividend structure will partially kick in next year, when the company intends to pay out 50% of excess free cash flow while paying down debt to 0.75 times EBITDAX, then ramping up to up to 75% thereafter.

On the recent conference call with analysts, CEO Scott Sheffield said that at current strip prices -- which were in the low $60s at the time of the early May conference call, but are over $70 right now -- Pioneer would be able to raise its dividend yield to about more than 4% next year, and potentially over 8% in 2023, when the full variable dividend kicks in.

If oil producers stay disciplined and keep supply in check -- and that is a big if, if history is any guide -- Pioneer should be able to generate high margins. Pioneer has the lowest costs per barrel of any U.S. shale producer, with breakevens in the high $20 range. Additionally, the company just bought out two sizable oil companies, Parsley Energy and DoublePoint Energy, with land directly adjacent to Pioneer's in the Midland basin of the Permian.

These high-quality adjacent assets should yield Pioneer an additional $525 million in operational synergies by the end of this year, further boosting margins. Pioneer used mostly stock to fund these deals, which will keep its leverage low. It's also encouraging that both target company shareholders were willing to take equity in the "new" Pioneer entity, rather than cash.

A new beginning for oil stocks, or more of the same?

Disciplined by the shale revolution's oversupply, it appears oil executives now realize their industry isn't a growth industry anymore. Ironically, that could actually be a much better thing for their stocks, provided that U.S. shale producers and OPEC+ continue with their current supply discipline. By limiting growth, milking assets for cash, and returning it to shareholders, oil stocks may be able to attract yield-seeking value investors in the 2020s.

Investors will have to keep an eye out for other producers that ramp up production and disrupt this dynamic, but assuming oil demand picks up with economic reopening, the biggest dividends in the 2020s stock market could come from oil drillers, just as banks became low-growth but highly profitable dividend growth stocks last decade following the financial crisis.