Please ensure Javascript is enabled for purposes of website accessibility
Log In Help Join The Motley Fool
Free Article Join Over 1 Million Premium Members And Get More In-Depth Stock Guidance and Research
By John Ballard - Jun 20, 2021 at 9:00AM

As the stock hovers near new highs, the Blizzard segment's monthly active users have declined.

Activision Blizzard's (ATVI -0.14%) stellar performance in 2020 was mostly lopsided, driven by record engagement levels in Call of Duty. Out of the $2 billion incremental increase in bookings last year, only $186 million was from the Blizzard segment. It's a bit concerning, since Blizzard oversees some of the company's most beloved titles, including World of Warcraft, Overwatch, Diablo, Hearthstone, and Starcraft.

The Activision segment, including results from Call of Duty, has more than tripled its monthly active users (MAUs) to 150 million since releasing Call of Duty: Mobile in Q4 2019.

Meanwhile, Blizzard's MAUs peaked after the 2016 launch of Overwatch at 46 million in the second quarter of 2017, and they now sit at 27 million. While Activision Publishing reported a revenue increase of 72% year over year in the first quarter, Blizzard reported just 7% growth in revenue -- primarily driven from healthy player engagement trends in World of Warcraft.

During the Q1 earnings call, Blizzard Entertainment President J. Allen Brack provided details on the company's plans with new releases in the Diablo franchise. His comments reveal that, despite the slow progress to improve Blizzard's results, growth could be just around the corner.

It's no secret that Blizzard has plenty of projects it's currently working on, including several Warcraft mobile titles, Overwatch 2, and Diablo IV. Game development can take several years from idea conception to final release, so progress might seem slow looking from the outside, but Brack assured investors that they are moving behind the scenes to capitalize on the deep pipeline of games they have in development. "When we look at the sort of the Blizzard development population, we've added hundreds of developers across our key franchises over the last few years," Brack said.

While Overwatch 2 will tap into a huge built-in market of millions of players who played the original game, Brack had some interesting things to say about the company's roadmap for Diablo.

It's clear that each upcoming release from the Diablo franchise is designed to accomplish a certain objective. For example, the goal with Diablo II: Resurrected, according to Brack, is to bring old fans back to the franchise. Blizzard is playing on sound marketing tactics here to bring out a remastered classic, which originally launched in 2000, to stir up the fan base ahead of the new installment Diablo IV, which doesn't have an official release date yet. Diablo II: Resurrected is scheduled to release during the third quarter on Sept. 23.

Diablo IV is the next mainline release in the franchise that Brack says will "advance the art of the action [role-playing game] genre." Improved graphics fidelity and innovations in gameplay generally go a long way toward widening the audience for a video game.

Brack also explained the business mindset behind Diablo: Immortal, the mobile version that was originally unveiled at BlizzCon 2018. "Diablo: Immortal, the point there or the goal there is to broaden the audience, bring an authentic version of Diablo to mobile," Brack said. Given the huge growth in MAUs that Call of Duty: Mobile has brought to Activision, Diablo: Immortal will probably be the most important release for Blizzard, so investors should watch this one closely.

The strategy with these upcoming releases is to cast a wide net across different platforms to grow MAUs. Blizzard is trying to offer a Diablo experience for everyone, including previous players, while also offering accessible ways on mobile, for example, to reach new players that will come back and play again. 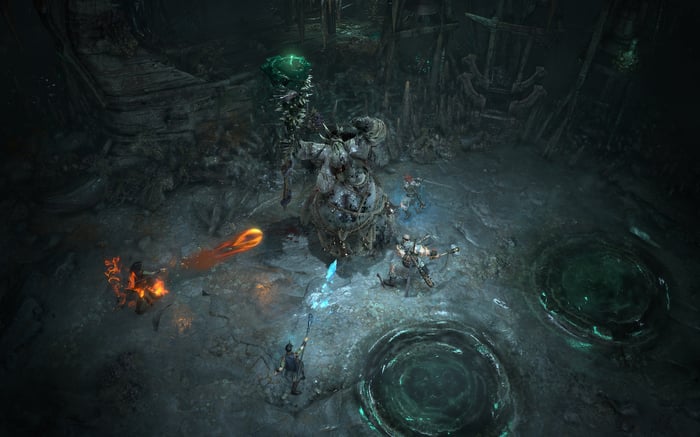 Blizzard can perform much better

If Blizzard can improve the financial performance of a 17-year-old game like World of Warcraft, it can certainly improve Diablo, with millions of fans, and Overwatch, its marquee esports title.

The stock has climbed 73% since Call of Duty: Mobile was released in October 2019. The upcoming releases from Diablo serve as another big catalyst for this top gaming stock.