Shares of the U.S. driller rose after an upbeat review from Wall Street. Here's a quick look at what was said.

At 2 p.m. EDT today, the stock of U.S. energy company ConocoPhillips (COP -0.67%) was higher by roughly 5%. There was no news out of the company, but an analyst at Bernstein and another Wall Street research shop provided updated views of the future of the energy sector, and investors responded by boosting the stock price.

Although not specific to ConocoPhillips, an analyst at Bernstein has taken a new look at names in exploration and production (E&P) and finds them generally attractive. The basic logic is that the supply/demand balance in the oil market is adjusting in such a way that oil prices are likely to remain elevated even in the face of an increasing use of cleaner alternatives, like electric vehicles. Notably, E&Ps are going to be increasingly focused on returning capital to investors. As a global player in the energy drilling space, ConocoPhillips is set to benefit. 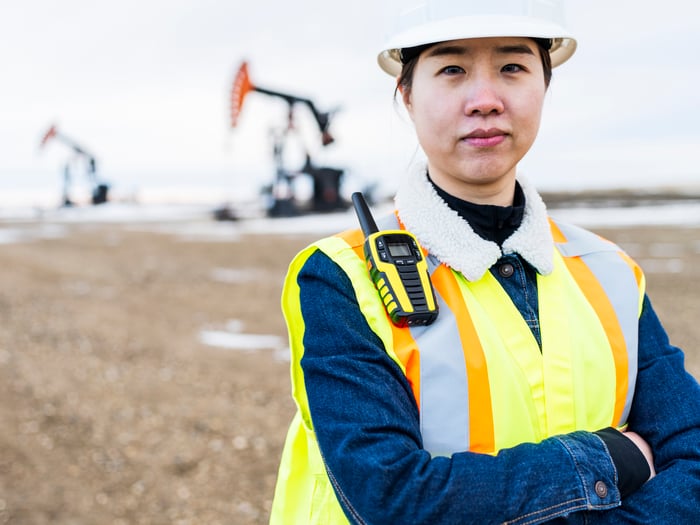 Which is why Bernstein maintained the stock at outperform. However, an analyst at the company increased ConocoPhillips' price target from $63 per share to $80, a jump of more than 25%. The stock is currently trading hands at around $60, suggesting there is material upside potential here if Bernstein's updated view of the energy market plays out.

Mizuho also increased its target, but the price jump from $73 per share to $82 was smaller. Still, Mizuho's projection also suggests a notable price advance could be in the cards.

Investors like to see price upgrades, so it's likely that the changes from Bernstein and Mizuho helped move the stock higher. That said, oil prices were up a little today, too, which certainly helped. But for most investors, the really important takeaway here is that ConocoPhillips is a focused E&P name, having spun off its downstream assets many years ago. That's part of the reason for the price target increases, but also a risk that might keep conservative types on the sidelines.

Energy prices are prone to dramatic price swings, which are often better navigated by more-diversified companies, like integrated energy giant Chevron, even though they might not benefit as much during the good times.