Please ensure Javascript is enabled for purposes of website accessibility
Log In Help Join The Motley Fool
Free Article Join Over 1 Million Premium Members And Get More In-Depth Stock Guidance and Research
By David Jagielski – Jun 22, 2021 at 5:12AM

These businesses have posted some strong sales numbers of late and aren't likely to stop growing soon.

Stocks that are popular on Reddit often possess attractive growth prospects. But they can also be risky investments and speculative buys. An example of this is meme stocks that rally for a short duration and may not be suitable investments for the long haul.

However, within the broad range of Reddit stocks, there are some investments that you can feel comfortable holding onto for many years. Two popular stocks with retail investors that you can buy today and hang on to are Petco Health and Wellness Company (WOOF -6.03%) and Palantir Technologies (PLTR 1.76%). With loads of potential and strong sales numbers already, these are investments you can buy and forget about. 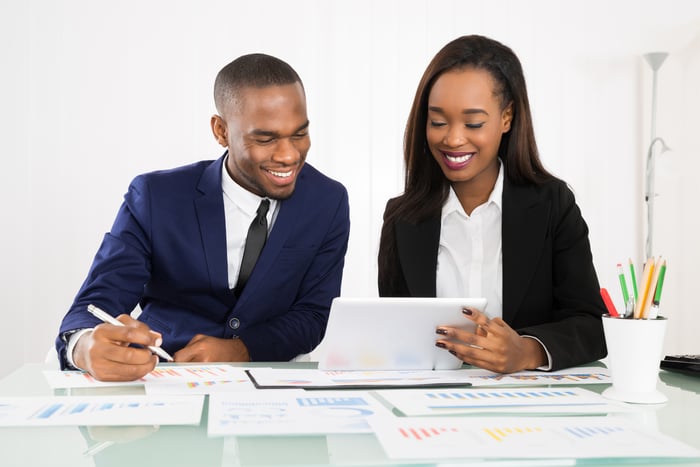 Petco provides pet owners with the products and services they need to help care for their furry (or scaly, or feathered ...) companions. Pet ownership grew amid the pandemic, and sales in the industry totaled $103.6 billion in 2020, the first time industry revenue cracked the $100 billion mark.

Although that may have been fueled by people spending more time at home, those trends may not necessarily be ending anytime soon. According to Kate Lister of Global Workplace Analytics, by 2025, 70% of workers could be spending a minimum of five days a month working remotely. And while people may not always be able to bring pets to the office, they can certainly have them around if they're working at home. That's why the growth in the pet sector may continue indefinitely as remote work becomes more prevalent.

Petco is a fairly new stock and has been trading on the markets since January. But with some attractive growth numbers, it's already capturing the interest of retail investors. For the quarter ended May 1, sales of $1.4 billion grew 27% year over year and the company reported a profit of $8 million, up from a loss of $31 million in the prior-year period.

The stock has seen some volatile trading of late, jumping to more than $28 earlier this month, only to fall back to about $22. Regardless of the hype it has been attracting of late from Reddit and other places, the company's underlying business is solid and there's plenty of reason to be bullish for the long term.

One thing that often captivates Reddit investors is a company that has a CEO who can be a bit outspoken. The best example of that is Tesla CEO Elon Musk, who has trolled short-sellers in the past and can sometimes tweet recklessly. One tweet in 2018 famously cost him and his company $40 million.

Software company Palantir's frontman, Alex Karp, isn't nearly as aggressive, but he's not afraid of speaking his mind. He even suggested that speculators could look elsewhere if they were impatient with the company, telling CNBC earlier this year: "We're in this for the long haul. If you are speculating or you're thinking about this short term, there are plenty of other things to invest in."

Palantir has been demonstrating some strong growth of late with sales of $341 million for the three-month period ending March 31, up an impressive 49% from the previous year. However, investors may be disappointed to know that the company's losses are also growing -- in fact, they almost doubled year over year, going from $54 million to $123 million. Operating expenses during the most recent period represented 112% of revenue, up from 103% in 2020.

Palantir is spending more on staff and growing its business. As of March 31, it had 149 customers, compared with 131 a year earlier. In addition to government agencies, it notes it has "leading companies in various commercial sectors" as clients. And it's also generating more revenue per customer. Its top 20 customers have been spending an average of 34% more with Palantir over the trailing 12 months than they were in the previous year.

Palantir is doing a great job of growing its business and diversifying with a broader customer base, and that can pay off in the long run. With a fast-growing company, reaching breakeven can take some time.

But the potential is there. Palantir's focus is on data and making better decisions, especially for businesses that need to be leaner -- and that's only going to be more important in the future. This is why, even though the stock may be a popular one with Reddit investors, it's also an all-around solid growth stock that can look great in any portfolio.

These 3 Promising Growth Stocks Look Much Better Than Robinhood