If your favorite restaurant can't seat you because it's understaffed or your airline canceled a flight because of a workforce shortage don't blame the people that aren't there. They've moved on. You can, too, as an investor.

It's been nearly two months since I wrote about the staffing crisis of the hospitality industry, detailing the surprising labor shortage in an economic recovery. If you're finally starting to revisit your favorite restaurants only to find that they're understaffed or shortening their hours you know exactly what I'm talking about.

The phenomenon isn't limited to just local eateries, of course. We've seen regional amusement park operators trim their operating calendars, and even American Airlines Group is canceling hundreds of flights this summer in part because of a staffing crunch.

This has become a politicized issue, but as I pointed out two months ago this isn't just about industries underpaying their workers or younger folks moving back in with their parents and getting by on government subsidies. A workforce revolution happened during the COVID-19 shutdown. A lot of people embraced side hustles, and they seem to like the scheduling flexibility and open-ended earning opportunity of hopping into the gig economy. Let's go over a few of these companies cashing in on the trend. 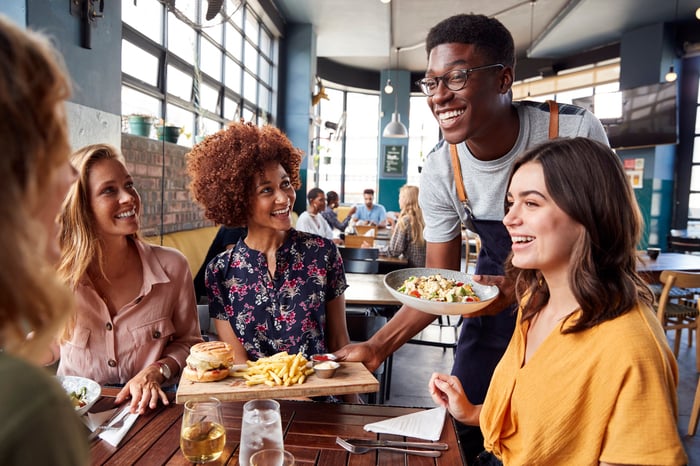 When restaurants had to close down their dining rooms last year they also had to reduce their waitstaff. Limiting operations to takeout orders and leaning on third-party deliveries meant having to keep the kitchens open and a bare-bones front line to handle the pick-up process.

Working on your feet all day isn't easy, and it's not a surprise that many displaced hospitality hires switched from serving food and drinks at once-buzzing eateries to hopping in their cars and nailing the last mile of the delivery process. DoorDash (DASH 0.50%) saw its revenue nearly triple in its latest quarter. Uber Technologies (UBER 0.06%) isn't a pure play in third-party delivery, but Uber Eats has been growing faster than its namesake ride-hailing business even before the pandemic.

Getting in your car and transporting people or merchandise around has become a popular job in the gig economy. Folks get to set their own hours. They can crank up their radios between passenger jobs. There's a lot more financial uncertainty than in jobs with set salaries or hourly wages, but flexibility and the opportunity for incremental revenue is ramping up the fleet of drivers at DoorDash, Uber, and Lyft (LYFT -0.57%). It may not seem that way at Uber and Lyft, which reported a decline in revenue through the first three months of this year relative to pre-pandemic levels a year earlier, but look out to next year. Analysts see Uber generating 58% more in revenue than it did back in 2019. Lyft is expected to be just 21% above 2019's peak, but it also lacks the restaurant delivery business that has served Uber and DoorDash so well over the past year.

You don't need a car for a side hustle. The lull of 2020 has lit entrepreneurial fires in a lot of the young hires that once took your orders, strapped you into roller coasters, and asked you to straighten your seat in preparation of your plane landing. Etsy (ETSY -1.92%) and Shopify (SHOP -2.26%) are killing it in the new normal. Folks with arts and crafts skills are selling their creations through Etsy's marketplace, and Shopify makes it easy for anyone to set up an online storefront.

Active sellers on Etsy have surged 67% to 4.7 million over the past year. Shopify is now accounting for nearly 9% of the U.S. e-commerce market, and revenue more than doubled in its latest quarter.

You don't need a car, creative flair, or a business model to thrive in the gig economy. Freelancing marketplaces Upwork (UPWK 3.21%) and Fiverr International (FVRR -1.69%) are matching job seekers who have unique skill sets with employers who prefer the simplicity and cost savings of contractors and freelancers over hiring and maintaining actual salaried employees. The beauty for both parties here is that opportunities are no longer limited by geographical reach. You can hire or work for anyone on the planet through either one-off jobs or longer contractor relationships. Upwork and Fiverr saw their revenue climb 37% and 100%, respectively, in their latest quarterly reports.

Stop politicizing the evolutionary process. You wouldn't walk into an abandoned Blockbuster Video store and wonder where all the clerks went. The workforce has moved on to more flexible positions with dynamic perks, potential upside, and the harvest of self-determination. Invest accordingly.