Please ensure Javascript is enabled for purposes of website accessibility
Log In Help Join The Motley Fool
Free Article Join Over 1 Million Premium Members And Get More In-Depth Stock Guidance and Research
By Daniel Foelber - Updated Jun 22, 2021 at 10:16AM

Down 35% from its high, Coinbase is beginning to look like it's worth the risk.

Love her or hate her, when Cathie Wood (the CEO of ARK Invest) speaks, the investing community listens. Ark manages six actively traded exchange-traded funds (ETFs), and each one is centered around long-term growth and paradigm-shifting technology.

Aside from electric vehicles, one of Wood's most outspoken ideas is Bitcoin (BTC -3.55%). And so it's no surprise that the investment management firm's various funds owns shares of one of the largest cryptocurrency exchanges in the world, Coinbase Global (COIN -10.55%). What is surprising, however, is the sheer number of shares that these funds have acquired in the two months since the company's direct listing. Let's take a look at the ARK's Coinbase stock accumulation -- as well as the company's strengths and weaknesses -- to determine if Coinbase is a stock worth buying now. 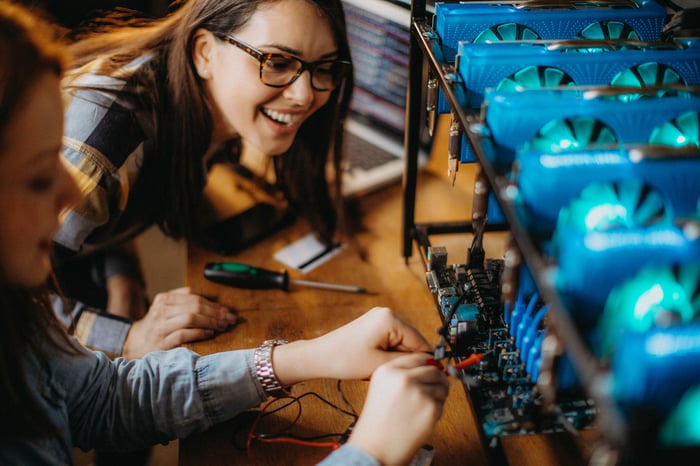 As of June 16, ARK's funds cumulatively own a staggering 4.63 million shares of Coinbase, valued at nearly $1.04 billion at the time of this writing. For context, that's nearly 2% of Coinbase's fully diluted capitalization of 261.3 million shares, which includes common stock, options, and restricted stock. This makes Ark one of the largest institutional owners of Coinbase.

After a sizable purchase during the first week of Coinbase's direct listing, the ARK Innovation ETF (ARKK -5.45%), ARK Next Generation Internet ETF (ARKW -5.58%), and ARK Fintech Innovation ETF (ARKF -5.19%) have been gradually adding shares. The following chart shows the combined daily buys and sells of these three ETFs. 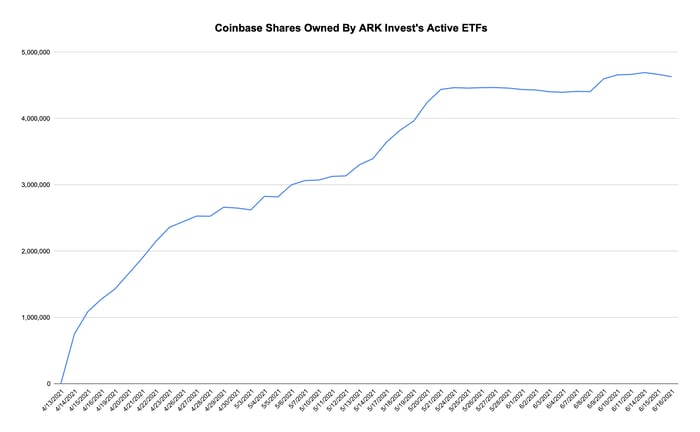 As you can see in the chart, ARK acquired most of its position in April and May. That's a good sign for investors considering the stock at its current price, which is much cheaper than what Ark has been paying. Coinbase is now one of the largest holdings in the ARK suite of funds. Notably, it's now a top-10 holding in ARK's flagship Innovation fund.

Coinbase is the No. 1 cryptocurrency custodian and exchange available in the U.S.  Last year's first quarter (Q1) witnessed 34 million verified users and proceeded to earn $1.28 billion in revenue and $322 million in net income for the whole of 2020. But that was nothing compared to its blowout Q1 this year. Coinbase finished the quarter with 56 million verified users, produced $1.8 billion in revenue, and generated $771 million in net income for a profit margin of 43% compared to 25% for the full year 2020. Coinbase clearly benefited from a surge in cryptocurrency trading and valuations as the cumulative market cap of all tokens went from less than $800 billion at the end of 2020 to over $2 trillion by the end of Q1 2021.

Coinbase charges a minimum trading fee of 1.49% per transaction. While it's true that it makes money from both the buying and selling of securities, it's generally going to make more money when cryptocurrency prices are going up. Higher valuations mean increased assets under management, trading volumes, and potentially more users entering its platform to try and get in on the action.

Aside from cryptocurrency prices, Coinbase is also benefiting from increased institutional adoption of Bitcoin. Cathie Wood's Bitcoin optimism is centered around the notion that the more regular companies (not just banks and fintech platforms) that hold Bitcoin on their balance sheets, the more its value and reputation can grow. It may surprise you to learn that Coinbase's institutional trading volumes were about 80% higher than retail trading volumes in Q1. A lot of that came from Bitcoin and Ethereum (ETH -4.49%), which comprise over 75% of the assets held on the Coinbase platform. Put another way, the cryptocurrency market is now sophisticated and dominated by big players -- a far cry from its fringe roots.

In sum, Coinbase is one of those rare companies that pairs profitability with some serious growth potential. Management is optimistic that the growth can continue into the second quarter while acknowledging the cyclicality of the cryptocurrency market and the positive and negative effects this dynamic will have on Coinbase's performance.

That leads us to Coinbase's weaknesses, the first being cryptocurrency volatility. Cryptocurrency may be more mainstream than it used to be, but it's just as volatile as ever. The worst of the May cryptocurrency crash knocked Bitcoin and Ethereum down over 50% in just a matter of days. Volatility has rendered Bitcoin ineffective as a currency. Prolonged downturns in asset values and investor sentiment could lead to difficult comps or even negative growth for Coinbase over the short to medium term.

It's probably best to steer clear of Coinbase if you don't believe in the future of cryptocurrency. But even after that baseline is met, there's still the threat of increased competition. Many of Coinbase's competitors offer higher interest rates and lower (or free) trading fees than Coinbase. As cryptocurrency adoption grows, Coinbase is likely to face even fiercer competition -- which could pressure profit margins and stagnate or shrink Coinbase's user count. However, Coinbase has never been hacked and has invested heavily in security and its user-friendly interface, and it has a reputation for offering high liquidity (which institutional investors love).

Cathie Wood and her team have been gobbling up Coinbase shares because they believe in the future of Bitcoin as both an asset class and a store of value. Given Coinbase's Q1 performance and Q2 projections, the company's 2021 numbers are poised to look excellent, which will make its valuation ratios look stellar. The big question is whether or not it can sustain its impressive pace.

For investors new to the space, it's probably best to spend some time learning about the different types of cryptocurrency before diving headfirst into cryptocurrency-related investments. But for investors who already own Bitcoin or Ethereum, or are simply looking to start a position in equities rather than tokens, Coinbase seems to be one of the best cryptocurrency stocks out there.

Why Shares of Coinbase, Silvergate Capital, and Riot Blockchain Are Rising Today

Why Shares of Coinbase, Silvergate Capital, and Bakkt Are Rising Today