Please ensure Javascript is enabled for purposes of website accessibility
Log In Help Join The Motley Fool
Free Article Join Over 1 Million Premium Members And Get More In-Depth Stock Guidance and Research
By Rich Duprey - Jun 22, 2021 at 7:47AM

Some serious allegations of illicit activity raise a cloud over the sportsbooks' future.

DraftKings (DKNG -5.13%) may be one of the most successful stocks that have gone public via the special purpose acquisition company (SPAC) route, but a short-seller thinks the sportsbook has a seedy underbelly rife with black-market gaming, money laundering, and organized crime.

While DraftKings says the scathing report is simply meant to drive the stock price lower to justify a big bet against the company, should investors worry the short-sellers are right? 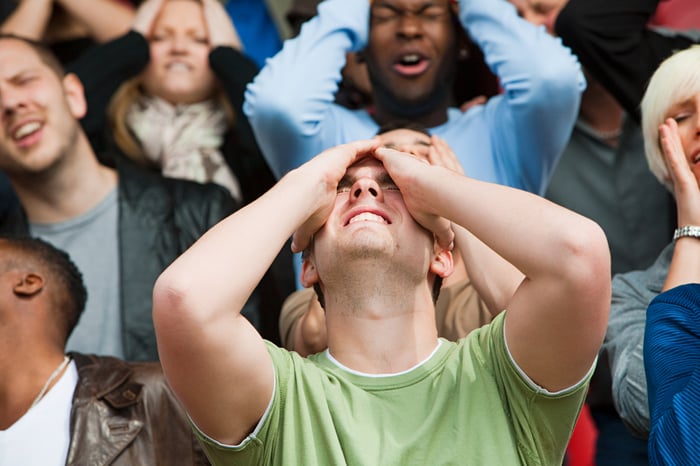 The allegations should not be taken lightly. While part of Hindenburg Research's thesis is that DraftKings' stock is overvalued, its allegations center around the three-way merger of DraftKings, SBTech -- a primarily Europe-based online gaming and sports betting platform -- and Diamond Eagle Acquisition, the SPAC that took the sportsbook public.

Hindenburg charges that SBTech is deeply involved in illegal gambling activities around the world, according to former employees it spoke with, and that as much as half of SBTech's revenue comes from black-market operations. Arguably more problematic is SBTech allegedly also does business in Iran, a country in which companies are banned from operating due to the government being a state sponsor of global terrorism.

DraftKings issued a statement saying: "This report is written by someone who is short on DraftKings stock with an incentive to drive down the share price. Our business combination with SBTech was completed in 2020. We conducted a thorough review of their business practices and we were comfortable with the findings."

It's those last words that investors need to parse. Rather than a definitive denial that Hindenburg's report is true, it instead hints that DraftKings management investigated those "business practices" and doesn't believe they will materially impact its operations. That's hardly a stinging rebuke.

According to Hindenburg, prior to the merger that took DraftKings public, SBTech formed a new distributor entity called BTi/CoreTech. That entity launched with 50 SBTech employees, and its CEO was allegedly part of another illegal operation that had been raided by the FBI and charged by the Securities & Exchange Commission with bilking investors out of $100 million.

BTi/CoreTech was also reportedly involved in numerous illicit gambling operations around Asia, including some affiliated with notorious Triad criminal organizations. And despite representations made to Oregon gaming officials by DraftKings, other affiliates supposedly had deep ties to online gambling in China, which is expressly prohibited there. It also purportedly continues to operate in China.

Yet, while Hindenburg pegs SBTech as critical to DraftKings' top and bottom lines, which it suggests is why management must know of the illicit operations, analysts say SBTech was acquired for its technology and not the money it brings in.

TheStreet reports that Credit Suisse analyst Benjamin Chaiken says: "if SBTech revenues were to go away entirely, we think there would be minimal impact on the DraftKings stock. While not ideal, in a worst-case scenario, an SBTech issue would not necessarily interfere with betting operations today."

Another problem is sourcing, as many of the most serious allegations made against DraftKings are leveled by supposed former employees who have been granted anonymity. Assuming they exist, they may have ulterior motives for making the charges.

DraftKings says, "We do not comment on speculation or allegations made by former SBTech employees."

SBTech's technology underpins DraftKings' operations in New Jersey, the largest sports betting market in the country where it is second only to Flutter Entertainment's (PDYPF 2.77%) FanDuel.

Year to date, DraftKings has generated over $60 million in revenue in New Jersey through its partnership with Resorts Casino. In comparison, FanDuel has generated some $169 million through the Meadowlands Racetrack (sportsbooks are required to be affiliated with a casino or racetrack in order to operate in the state).

While the SBTech's technology -- and not its international revenue contribution -- may be what DraftKings was after, the platform represented fully 12% of the sportsbooks' total revenue in 2020 and 25% of the increase it saw last year.

It's not certain it would be easy to unwind the intricacy of SBTech's technology and its revenue contributions if regulatory and legal issues should arise.

Shares of DraftKings tumbled after the report surfaced though it has made back some of the lost ground, which undermines Hindenburg's other problem with the sportsbook.

The short-seller noted that DraftKings trades at an inflated valuation of about 26 times trailing revenue and 20 times estimated sales for 2021 with no expectations for generating profits for years to come.

To be honest, I'd have preferred DraftKings issue a blanket denial of the allegations. I think the nuanced response leaves room for believing the veracity of what Hindenburg said could actually withstand scrutiny.

Yet the market has had time to digest the report and seems to agree the charges would be immaterial to the sportsbooks if they ultimately proved true. With room for much larger expansion to come as more states legalize sports betting, including some of the biggest markets like New York and California, there is the opportunity for DraftKings to grow into its premium valuation.