Please ensure Javascript is enabled for purposes of website accessibility
Log In Help Join The Motley Fool
Free Article Join Over 1 Million Premium Members And Get More In-Depth Stock Guidance and Research
By Keith Speights – Jun 22, 2021 at 5:52AM

Investors seemed to yawn over a really big new deal for the vaccine maker.

Moderna keeps reporting more good news on a regular basis. Usually, the company's announcements serve as solid positive catalysts for the biotech stock. That's not always the case, though. Here's why Moderna just booked another $3 billion in vaccine orders and no one seemed to care. 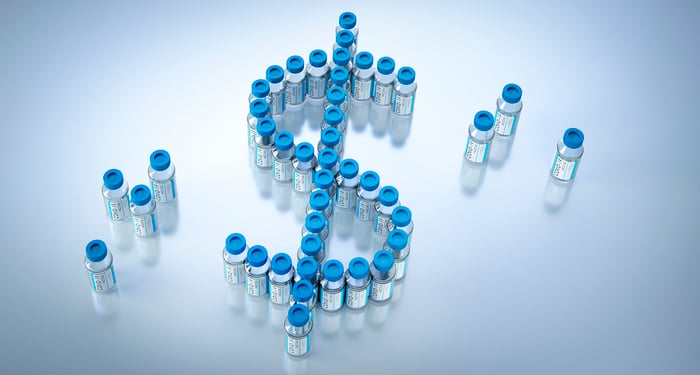 Moderna announced last week that the U.S. government was buying another 200 million doses of its COVID-19 vaccine. The company didn't announce any financial details of this latest purchase. However, if we use the previous $15 price per dose that Moderna charged to the U.S., the deal is valued at $3 billion.

The U.S. government could use some of these additional 200 million doses for primary vaccination, including of children. However, Moderna CEO Stephane Bancel pointed out that the doses could also be used for booster shots if necessary.

Moderna hasn't pocketed all of the money from its U.S. supply agreements yet. The company has handed over 217 million doses of its vaccine to the U.S. so far. It expects to deliver 110 million doses in the fourth quarter of this year plus 90 million doses in Q1 of 2022. the remaining shipments would presumably come later next year.

You might think that a new supply deal that should boost Moderna's sales by $3 billion would cause investors to celebrate. Instead, they seemed to yawn. Take a look at how Moderna's share price moved following the company's big news last week. 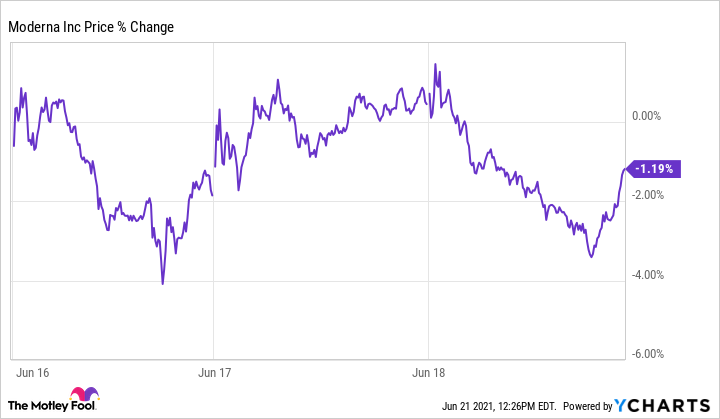 Why did the stock decline rather than jump on such good news? It's probably because of some of the other developments last week.

On June 14, Novavax (NVAX -10.14%) announced results from a late-stage study conducted in the U.S. and Mexico of its COVID-19 vaccine candidate. The company reported overall efficacy of 90.4% and 100% efficacy against moderate and severe COVID-19. Importantly, Novavax's vaccine achieved an efficacy of 93.2% against new coronavirus variants.

Two days later (the same day Moderna announced the new supply deal with the U.S.), German biotech CureVac (CVAC 3.08%) reported that its messenger RNA (mRNA) vaccine candidate achieved an efficacy of only 47% in a late-stage study. The company attributed the low efficacy to the prevalence of coronavirus variants.

Investors seemed to have been concerned that both of these developments could be bad for Moderna. The obvious question arising from CureVac's disappointing news was: Could Moderna's mRNA vaccine face similar challenges with variants? And with Novavax showing great efficacy against the variants, could its vaccine present a threat to Moderna's future vaccine sales?

What investors really want to see

I don't think that Moderna has anything to worry about with CureVac's poor results. The mRNA approach used by CureVac is different than Moderna's. So far, Moderna's COVID-19 vaccine appears to be holding up well against emerging variants. It is possible, though, that Novavax could capture some of the market share in the future that could have gone to Moderna.

Still, Moderna's big new deal with the U.S. government warranted a more positive reaction. The company is about to make a lot more money than it was counting on making. That's extra cash that can be used to reinvest in its pipeline.

What investors really want to see, though, is that a large portion of Moderna's COVID-19 vaccine revenue will be recurring beyond 2023. I think that the coronavirus variants make this scenario more likely than not. Until there's more confidence on this front, however, Moderna could find it challenging to impress investors.