Please ensure Javascript is enabled for purposes of website accessibility
Log In Help Join The Motley Fool
Free Article Join Over 1 Million Premium Members And Get More In-Depth Stock Guidance and Research
By George Budwell - Jun 17, 2021 at 11:06AM

The biotech's COVID-19 vaccine candidate no longer appears to be viable.

Shares of German biotech CureVac (CVAC -5.39%) are down by a hefty 49.9% as of 9:47 a.m. EDT Thursday morning. The biotech's shares are getting walloped today in response to disappointing late-stage trial results for its COVID-19 vaccine candidate known as CVnCoV.

Specifically, CureVac reported that the experimental vaccine completely whiffed on its second interim analysis. Despite being a messenger RNA (mRNA) vaccine, which is the same platform used to develop the Pfizer/BioNTech and Moderna vaccines, this early peek revealed that CVnCoV was less than half as effective (47%) as its predecessors at preventing COVID-19 infections. 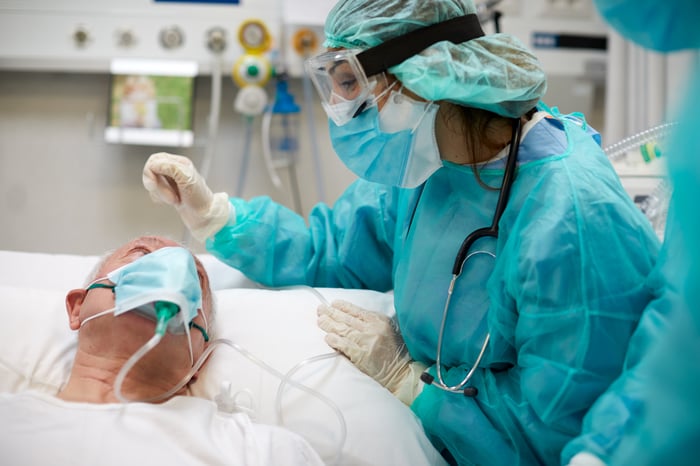 CureVac blamed the vaccine's poor efficacy -- compared to other mRNA vaccines already on the market -- on the large number of COVID-19 variants currently in circulation. The first round of mRNA vaccines were trialed before most of these variants became widespread.

While the vaunted U.S. market is arguably already saturated with COVID-19 vaccines, CureVac stood a decent shot at carving out a profitable niche with its vaccine in several ex-U.S. territories. Following these underwhelming trial results, however, the biotech probably won't realize a significant financial benefit from this once-promising product candidate.

Can CureVac stock bounce back soon? Wall Street was expecting a lot from this vaccine from a revenue generation standpoint, to put it mildly.

The biotech, in fact, may have just lost upward of $3 billion in future revenue. In other words, CureVac's shares are unlikely to rally anytime soon.