Ongoing COVID-19 testing and deals in the core business could keep growth high for longer than many think.

With U.S. cases of COVID-19 down more than 90% from their January peak, it might seem like an odd time to invest in a company that attributes more than 90% of last year's business to testing for the disease. Unfortunately, several new strains of the virus that cause COVID-19 have been spreading. That could mean the end of the pandemic is a lot farther away than many believe.

One company playing multiple roles in the fight is Fulgent Genetics (FLGT 3.04%), which saw both testing volumes and its stock price explode higher last year. Even after this run-up, there are at least three reasons shares could still beat the market over the next few years. 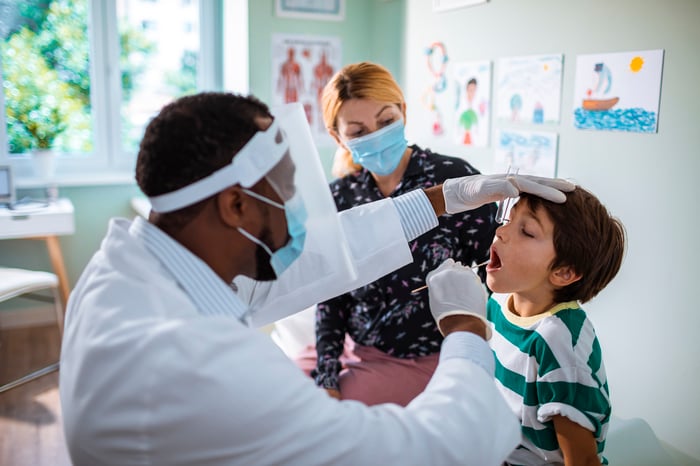 1. The SARS-CoV-2 virus is changing

A virus is just a piece of genetic code. It isn't alive. To do something, it needs to infect a host with cells it can use to make copies and spread. Sometimes those copies have errors that cause the virus to behave differently -- for example, it could spread more easily, cause different symptoms, or make the known symptoms more severe. The differences can also make it harder for existing drugs to recognize. That's what is happening with the SARS-CoV-2 virus.

According to the U.S. Centers for Disease Control and Prevention (CDC), there are now four variants of concern in circulation. The vaccines of Pfizer and BioNTech, as well as the ones from Johnson & Johnson and AstraZeneca, have all shown some reduced ability to prevent these strains from causing COVID-19.

The most serious of these appears to be the delta variant, which has been referred to as a "double mutant" because of two noteworthy differences from the original virus. It quickly became the dominant strain in the U.K. and is coming to make up a larger percentage of the cases in the U.S. as well.

So far, only 46% of the U.S. population has been vaccinated. That leaves plenty of people for the delta variant -- which is thought to spread 60% more easily than the original virus -- to infect. It's especially worrisome for the many southern states that have inoculated only one-third of their residents. It means the chance of another wave of cases -- and the ongoing need for testing -- is high.

2. NextGen sequencing is growing, too

COVID-19 testing was what brought Fulgent the most attention last year, and that's understandable -- sudden demand took a tiny diagnostics company and propelled it to more than $800 million in projected 2021 revenue. It's a growth story for the ages. But investors should know that even before coronavirus, the company was showing momentum.

In 2019, Fulgent reported $32.5 million in sales. That was 52% more than 2018. Back then, the entire business was focused on next-generation sequencing (NGS). Fulgent's NGS offers genetic testing for rare diseases, reproductive conditions, cardiovascular diseases, cancers, and neurological disorders. And this work is not only continuing; it's growing. The company has added thousands of new tests to its arsenal and now claims 18,000 single-gene tests and the ability to identify 5,700 genetic conditions.

It also recently hired a new chief medical officer, Dr. Larry Weiss, an oncologist who will play a key role in expanding testing capabilities for cancer. Furthermore, a contract with the CDC to perform surveillance testing on COVID-19 mutations will add to the NGS sales for 2021. All told, management expects revenue of more than $100 million this year.

Despite processing 3.8 million tests last year, Fulgent doesn't yet have agreements with any major insurers as an in-network provider of genetic testing. That said, its ability to provide low-cost testing should eventually lead to these reimbursement contracts, ideally within the next couple of years. Management acknowledged that such conversations are ongoing and that any agreement would cause them to meaningfully raise the guidance that was already provided.

Signing such an agreement in 2021 would be great progress. It would also allay fears that Fulgent's growth will hit a wall in the near future. Each new insurer it partners with could give the top line another big boost. This potential, coupled with the negativity about its prospects beyond COVID-19, make Fulgent a potentially perfect scenario for investors with some patience.