Please ensure Javascript is enabled for purposes of website accessibility
Log In Help Join The Motley Fool
Free Article Join Over 1 Million Premium Members And Get More In-Depth Stock Guidance and Research
By Zhiyuan Sun - Jun 24, 2021 at 5:18AM

This innovative consumer genetic testing company is more than meets the eye.

On June 16, special purpose acquisition company (SPAC) Virgin Group Acquisition completed its merger with consumer genetics company 23andMe (ME -9.57%). The deal funded the latter with $592 million in cash at a total enterprise valuation of $3.5 billion. Investors were enthusiastic about the agreement, with shares soaring by over 20% on the day of their trading debut.

That's quite the jump, considering 23andMe's management projects that its revenue will decline sharply over the next few years and not recover to 2019 levels until 2025. So what's behind the hype? 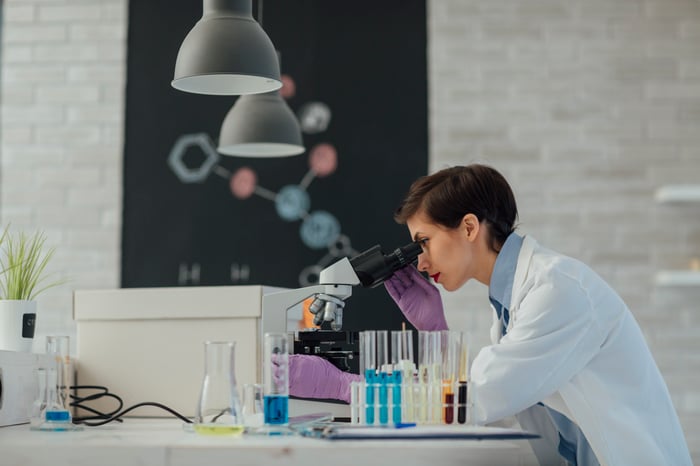 23andMe is known for its namesake health and ancestry testing services. After purchasing and receiving its test kit, consumers ship a saliva sample to a laboratory for analysis. The results include a complete breakdown of the user's genetic background. Customers can also use the data to locate close relatives on the 23andMe platform.

The report given to each customer includes health predisposition (such as vulnerability to chronic diseases), carrier status for hereditary disorders, and various traits (eye color, wakeup time, alcohol flush, tolerance to caffeine, etc.).

23andMe has sold over 11.3 million tests since its inception -- but that number looks to be about to hit a brick wall. The company's declining sales in recent years show that almost everyone in the developed countries where 23andMe operates who was interested in their ancestry or genetic health and could afford the purchase has already done so. In 2019, the company brought in $441 million in revenue, with consumer services accounting for 96% of sales. However, its forecast for this year amounts to just $243.5 million in sales. 23andMe is, fortunately, improving its operating income less noncash items from a loss of $85 million in 2019 to a positive $7.5 million this year.

It's clear that management sees the problem as well. The company has been aggressively diversifying into pharmaceutical research to make up for the lost sales. As a result, that segment now accounts for 23% of overall revenue.

It was able to do so by leveraging its vast genetic database obtained from consumers. Of the 11.3 million people who've used 23andMe's kits, 8.9 million consented to the company's using their data for research and development. This has given 23andMe the largest such database in the country -- it's ahead of the next runner-up, Regeneron Pharmaceuticals (REGN 2.32%), by 7.9 million.

23andMe is developing over 40 therapeutics in areas including oncology, immunology, cardiovascular diseases, metabolic diseases, and neurology, all using drug targets derived from studying genomic abnormalities in its database. In addition, the company boasts that it can utilize the consumer genomics data to shorten the drug clinical trial time by an average of three years and increase a trial's probability of success. In 2018, 23andMe secured a $300 million upfront equity investment from GlaxoSmithKline (GSK -3.00%) to develop new therapeutics, with $127 million more in research revenue coming between then and mid-2023.

Lastly, 23andMe is combining its genetic research and testing to curate a subscription service for its consumers. Each subscription offers insight into an individual's pharmacogenetics, heart health, DNA relatives, and polygenic risk scores (i.e., risk of developing cancer by a certain age). The $29/year service has attracted more than 125,000 subscribers since its soft launch in October.

Overall, 23andMe is making a sharp comeback with its new business model. Currently, the stock looks like it already has that priced in, trading at a very expensive 14.6 times EV-to-sales. It's still nonetheless a good healthcare stock to buy -- albeit as a small stake in case its growth disappoints.