Please ensure Javascript is enabled for purposes of website accessibility
Log In Help Join The Motley Fool
Free Article Join Over 1 Million Premium Members And Get More In-Depth Stock Guidance and Research
By John Ballard - Jun 24, 2021 at 8:54AM

The market is laser focused on growth at Disney+, but the potential growth at the theme parks is getting overlooked.

Walt Disney's (DIS 2.21%) stock price has rebounded 80% since the end of March 2020. Investors are counting on continued growth with Disney's streaming services (Disney+, Hulu, ESPN+), where direct-to-consumer revenue surged 59% year over year last quarter to reach $4 billion. But management used the downtime during the pandemic to make major improvements and prepare for new attractions at theme parks. All of these initiatives could see the segment's profits reach higher levels than before the pandemic over the next few years.

Disney has big plans to expand its parks -- a segment that generated roughly half of the company's operating profit before the pandemic. Disney just opened the Avengers Campus at Disneyland Resort, and that comes as its Disney+ series Loki is seeing strong viewership after its June debut. Investors shouldn't discount the impact Disney+ could have on park visitation in the future. 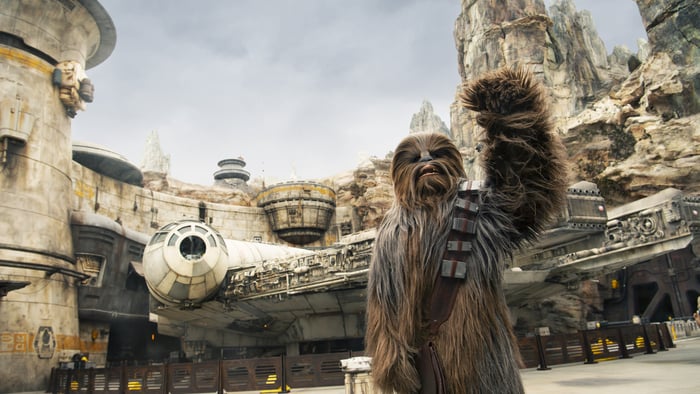 On top of those initiatives, Disney has rolled out contactless check-in at hotels, virtual queues for popular rides, and other digital improvements to add to the guest experience and free up time for guests to do other activities while waiting.

When guests have more time to do other things at the parks, it leads to more revenue opportunities, since guests don't have to spend all day clustered around a certain attraction at the park. As spending per guest increases, it has a direct impact on Disney's profits, and keep in mind, CEO Bob Chapek is a master at optimizing costs and improving margins.

Investors should prepare for further margin gains. At the recent Credit Suisse Communications Conference, Chapek said that the profit margin has a chance to have an "impactful" recovery. That recovery is very much underway, as Chapek mentioned management is seeing "encouraging underlying demand" at the parks as they reopen.

"Our forward-looking reservations are really strong at our domestic parks, and we're seeing also strong underlying demand at our Disney Cruise Line in terms of what we're seeing from consumers," Chapek said.

Traditional valuation metrics aren't very useful right now, since the stock has rebounded over the last year while profits went down during the pandemic. But there's one way to unravel the value in Disney's share price at current levels. We can estimate what Disney's streaming businesses are likely to be worth in three years, and that will give us an idea of what the market would be paying for the rest of Disney's empire, including theme parks.

If Disney achieves its subscriber target for Disney+, its direct-to-consumer revenue could reach approximately $30 billion by fiscal 2024. Applying a price-to-sales (P/S) ratio of six to that amount, which is a discount to Netflix's P/S ratio of 8.8, Disney's direct-to-consumer business could be worth $180 billion in three years. That makes sense relative to Netflix's current market capitalization of $225 billion.

Disney's current market cap is $316 billion, so it's likely the streaming business could be worth more than half of the amount investors are willing to pay for all of Disney right now.

But that would severely undervalue Disney's core assets, such as its media networks, theme parks, studios, and consumer products. These core businesses generated nearly $15 billion of operating profit in fiscal 2019. These are highly profitable segments that deserve to trade between 12 to 15 times operating income, which would value these assets around $200 billion.

Throw on top of that Chapek's initiatives to improve the profit margin at the parks, and it's likely that Disney's core businesses will earn more than $15 billion in operating profit in three years. Analysts currently expect Disney to report $18.5 billion in operating income by fiscal 2023.

The improving profitability at the theme parks won't go unnoticed by investors. The combination of improving profits and continued growth in streaming should push the stock higher over the next few years. How high can it go? That all depends on how much profit management squeezes out of the parks, and how many subscribers Disney+ can reach -- two things investors should watch.