Please ensure Javascript is enabled for purposes of website accessibility
Log In Help Join The Motley Fool
Free Article Join Over 1 Million Premium Members And Get More In-Depth Stock Guidance and Research
By Will Healy - Updated Jun 24, 2021 at 4:51PM

Rising payouts and compelling product offerings should limit the downside in a potential sell-off.

Recent record highs in the Nasdaq have led some stockholders to renew their worries about an impending market crash. While those with a long-term investing mindset are less concerned about periodic stock price corrections, having some concern about the potential is natural for tech investors, especially since past crashes hit that particular sector hard.

One way to guard against taking a big hit is to diversify your portfolio and that dividend stocks tend to offer some stability in such times. If you are tech-focused you should know that the technology sector has increasingly embraced dividend payouts. 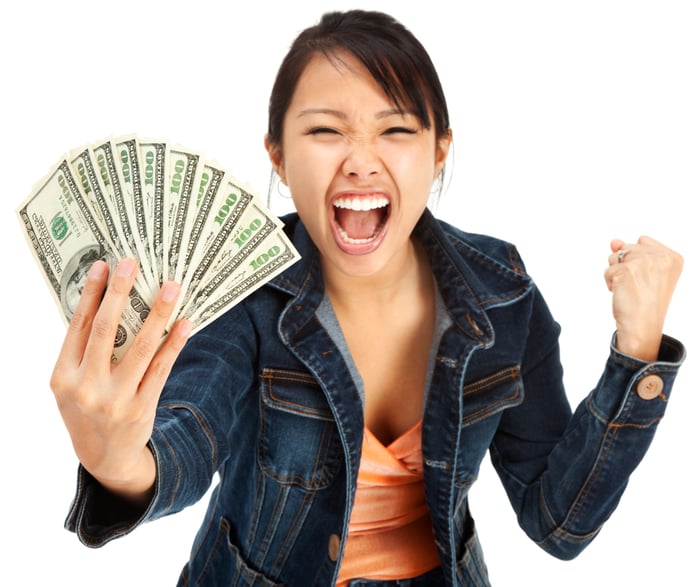 Consumers may not know Broadcom well. The tech company has been around (under various names) since 1961 and operates behind the scenes as a U.S.-based designer, developer, manufacturer, and global supplier of semiconductor and infrastructure software products. It stays ahead of its competition by investing heavily in research and development, spending about $5 billion on R&D in 2020.

Broadcom also provides technologies that could appeal to customers even in more challenging times. Management told investors in the company's second-quarter 2021 earnings call that it continues to see surging demand for its Wi-Fi6E product. This offers broadband at faster speeds and lower latency than the current Wi-Fi technology. Its enterprise software also remains a critical part of business management for its clients.

The financials reflect Broadcom's growing popularity. For the first six months of fiscal 2021, revenue increased 14% versus the first two quarters of fiscal 2020. Broadcom may have hinted at uncertainty by only offering an outlook for one quarter. Nonetheless, predictions of about $6.75 billion in Q3 revenue would mean a 16% increase compared with Q3 of 2020. Net income more than tripled to almost $2.9 billion during that period. A massive decrease in selling, general, and administrative expenses helped to boost that income growth.

That net income also led to over $6.4 billion in free cash flow over the last two quarters, well over the $3.1 billion in dividend costs during that time. Moreover, Broadcom's $14.40 per share annual dividend yields more than 3%. It has also increased its dividend payout at least once per year since initiating payouts in 2010.

Admittedly, the stock may seem pricey at just over 40 times earnings, even though the multiple has fallen from the 75 range since January. Nonetheless, revenue growth, a generous payout, and compelling product offerings should limit any potential sell-off in this stock during a market downturn.

Its business generated net revenue of $6.7 billion in the second quarter of 2021, an increase of more than 11% compared with year-ago levels. This shows an acceleration from revenue declines in the previous quarter and fiscal 2020. Moreover, due to goodwill impairment in Q2 2020, costs fell by 7%. This allowed net income to turn positive as HPE reported a quarterly income of $259 million, up significantly from the $851 million loss in the year-ago quarter.

Furthermore, this has helped HPE generate $368 million in free cash flow during Q2. The company also raised free cash flow guidance for the year to the $1.2 billion to $1.5 billion range. This comes in well above the $560 million generated in fiscal 2020.

The free cash flow easily covered the quarterly dividend cost of $156 million. That dividend, which now amounts to $0.48 per share annually, yields a cash return of around 3.3%. The annual payout has also risen every year since HPE's inception in 2015. Considering that the dividend remains well below free cash flow, the payout hikes can continue even if tech stocks lose their popularity for a time.

Additionally, no market crash will stop the telecom industry's move to 5G, and Verizon continues to capitalize. By the end of last year, it had expanded its 5G Nationwide service to 230 million people across the U.S.

The company also purchased $45 billion in licensed spectrum earlier this year, just under twice what AT&T spent. It will use this to capitalize on "all 5G opportunities," including home, mobility, and edge computing. One such opportunity is its burgeoning network-as-a-service business. This will support operations as diverse as Honda's autonomous driving and Deloitte and SAP on a retail digital platform.

Despite Verizon's potential, revenue and earnings increases have typically remained modest. In the latest quarter, revenue rose by 4%. Net income surged 25%, mostly because operating expenses did not grow significantly during that time.

Verizon also remains a cash flow generator, reporting $5.2 billion in free cash flow in the previous quarter. This covered the $2.6 billion in dividend costs. Moreover, Verizon recently increased the payout. Now at $2.51 per share annually, it produces cash returns of 4.5%.

This payout has risen every year since 2007, and due to that dividend, stockholders may think twice about selling Verizon when so few investments offer comparable cash returns. As customers continue to embrace the advantages of 5G, both customers and investors will likely continue linking with Verizon.