Please ensure Javascript is enabled for purposes of website accessibility
Log In Help Join The Motley Fool
Free Article Join Over 1 Million Premium Members And Get More In-Depth Stock Guidance and Research
By Zhiyuan Sun - Jun 25, 2021 at 7:38AM

Clover Health has been a fantastic get-rich-quick stock in the past month. Can the party last?

Shares of Medicare Advantage health insurance company Clover Health Investments (CLOV -1.51%) are up over 98% in just one month, thanks to  as part of a short squeeze led by enthusiastic traders of the r/WallStreetBets subReddit. The stock is now holding steady at levels than when short-seller firm Hindenburg first published striking allegations in February that caused it to tank in the first place.

On June 22, Chamath Palihapitiya, the billionaire venture capitalist behind Clover Health, publicly acknowledged that the company was the target of a short squeeze and that investors could "lose a significant portion of their investment" by buying at this time. The stock nevertheless surged over 10% on the day of the news release. So should investors stake all their chips in this buying frenzy? 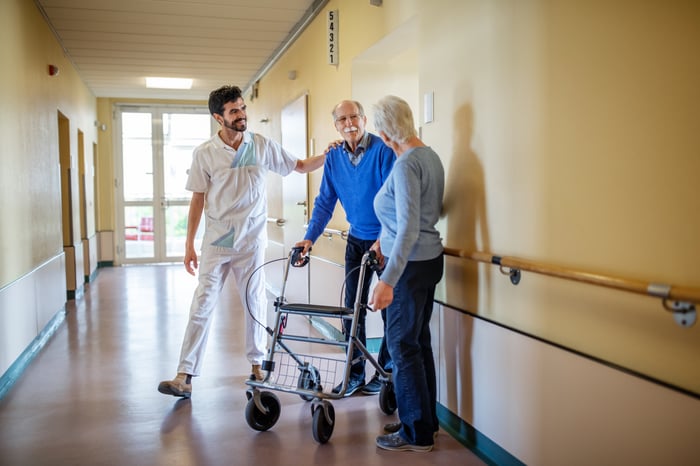 The numbers here don't look that awe-inspiring, but they are rather solid in context. Clover Health's revenue growth is currently the best in the industry, well above that of health insurance giants such as Aetna, Cigna, and Humana.

The secret sauce behind Clover Health is simple; spend more money on helping patients instead of banking profits. Medicare Advantage organizations are required by law to spend 85% of the federal premiums they receive on patients' health expenses. Hence, it should be no surprise that many health insurance firms (if not all) just pay out the bare minimum. On the other hand, Clover Health pays out 96% to 108% of its revenue in medical care expenses.

That does bring up another problem. The company is largely successful due to providing premium health plans in a hyper-competitive market. However, it must consistently rely on paying out expenses at a loss in order to retain customers. In short, its business model has a huge sustainability problem (albeit, patients benefiting tremendously). This explains why the stock's short interest has hovered around 37% and isn't falling even after multiple squeezes.

Right now, Clover Health stock isn't expensive at all, trading at 6.76 times revenue -- a reasonable price to pay for good revenue growth. But until it can find a way to turn a profit, it will consistently consume its $720 million in cash balance raised mostly from IPO proceeds. Don't get me wrong; Clover Health definitely has all-in potential. It's just best to wait until the healthcare company can generate positive net income first. That will also catalyze more short-sellers to begin covering their positions, leading to a much better risk-reward profile than where it's at now.