Please ensure Javascript is enabled for purposes of website accessibility
Log In Help Join The Motley Fool
Free Article Join Over 1 Million Premium Members And Get More In-Depth Stock Guidance and Research
By Jeremy Bowman - Jun 26, 2021 at 10:00AM

After a blowout earnings report, the swoosh forecast strong growth through 2025.

There may be no big brand stock executing better than Nike (NKE -3.41%).

Shares of the sportswear giant just jumped double digits on a flawless fourth-quarter earnings report. Results easily beat expectations with revenue jumping 96% from the lockdown-impacted quarter a year ago to $12.3 billion, or up 21% from Q4 2019, showing the company is well ahead of pre-pandemic levels. That also easily beat analyst estimates at $11 billion.

Nike's direct and digital performance stood out with direct sales up 73% to $4.5 billion, making up more than a third of total revenue, and Nike brand digital sales up 41% from the year-ago period and 147% from two years ago.

Profits also surged thanks to the shift to higher-margin direct sales as Nike reported earnings per share of $0.93, easily beating the consensus at $0.51.

Guidance was equally impressive as management called for low double-digit revenue growth this fiscal year to more than $50 billion, ahead of estimates at $48.5 billion, and for improving margin, though it didn't give a specific earnings per share target.

The company was also confident enough to give guidance through fiscal 2025, showing it will continue to reign supreme over the sportswear world. 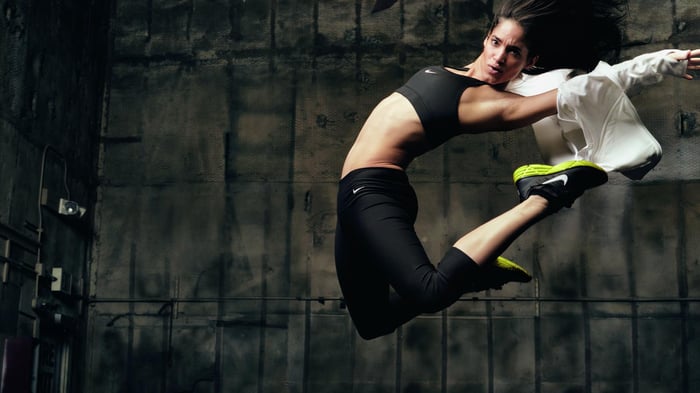 Looking ahead to 2025, Nike called for roughly 10% annual growth and improving EBIT (earnings before interest and taxes) to the high teens, up from a 15.5% EBIT margin last year. Based on that math, the company would reach $65.3 billion in revenue by 2025, up roughly 50% from a year ago, and its operating profits would jump to an estimated $11.8 billion, up 70% from $6.9 billion last year.

Nike's strength in direct and digital, the strategy it calls Consumer Direct Acceleration, is set to power that growth. Management said that Nike direct sales, which come from its own stores and digital properties, would make up 60% of revenue by 2025, up from close to 40% today, while owned and partnered digital sales would grow to 50% with Nike digital sales growing to 40% of overall revenue.

That strategy, which evolved from the Consumer Direct Offense program it announced in 2017, has helped solidify a number of its competitive advantages. It's brought it closer to the customer and given customers more ways to engage and shop with Nike. It's strengthened its relationships with key retail partners like Foot Locker, whom Nike has asked to provide differentiated experiences for Nike products. Through apps like Nike Training Club and Nike Run Club, it's also built out an audience of 300 million members, which drove $3 billion in revenue in the latest quarter.

Nike's mobile apps also continue to be winners, with SNKRS posting over 90% growth in demand in the fourth quarter and 80% growth in monthly active users, management said on the earnings call. It also expanded the Nike mobile app into 10 new countries last quarter.

At the same time, Nike's execution with its new strategy has come as its closest rivals have faltered. Under Armour (UAA -4.65%) (UA -4.02%) once seemed set to pose a legitimate challenge to the industry leader back when Steph Curry was the biggest star in the NBA, but Curry's signature shoes never took off and his star has since faded. Meanwhile, a number of unforced errors also soaked the company's growth as founder Kevin Plank made supportive comments toward former President Donald Trump during a controversial time, damaging the brand. Plank has stepped down from the CEO spot, and Under Armour's once impressive growth has yet to return.

adidas (ADDYY -2.81%) has continued to perform well as a stock in recent years, but the company's revenue growth rate has lagged the larger Nike and it no longer seems to be the threat in running and basketball that it once was. The surge it got in the mid-2010s when vintage sneakers like the Adidas Superstar topped the ranks has come to pass. The chart below shows how Nike has performed against its two largest rivals since it announced the Consumer Direct Offense in 2017. 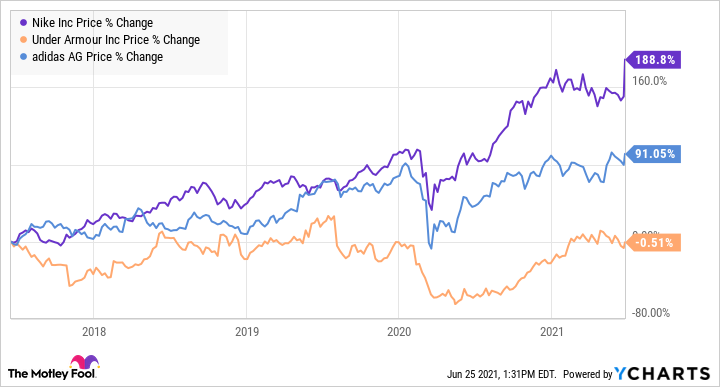 It's also worth pointing out that Nike's annual women's sales are roughly double those of lululemon athletica (LULU -3.06%), the athleisure pioneer, and women's has become a major growth category for Nike with sales jumping 22% to $8.6 billion.

It's no accident that Nike is poised for another decade of domination. The stock has been a juggernaut since its 1980 IPO, rising nearly 100,000%. In other words, $1,000 invested in the stock then would be worth nearly $1 million today.

Nike's industry is not one that changes quickly, and with an unrivaled brand, a history of innovation, vast marketing power, and an unmatched roster of sports stars, the sneaker king won't be knocked from its throne anytime soon.