This desalination stock has a long runway for growth in this era of megadroughts and water scarcity.

One of this weekend's top U.S. news stories is the life-threatening and unprecedented heat wave in the Pacific Northwest, which is shattering all-time records and is forecast to last into the coming week.

The scientific community is largely attributing this event to global warming, or the changing of the world's climate stemming heavily from human activities that generate greenhouse gases.

For this article, it doesn't matter what you believe to be the cause of our changing climate; the relevant fact is the Earth is getting warmer. This means that easily accessible fresh water supplies are likely to continue to shrink while at the same time demand should continue to rise because of an increasing global population and waves of people in developing nations who are moving into the middle class.

Given this unsustainable situation, the use of desalination -- the removal of salt from seawater or brackish water to produce potable water -- is going to continue to grow at a solid clip in water-scarce areas around the world, in my opinion.

If you're on board this thinking, you might consider buying shares of desalination specialist Energy Recovery (ERII -0.91%), which has the potential to be a long-term winner. That said, this small-cap stock is not suited for conservative investors, as it's been quite volatile and that volatility could continue. 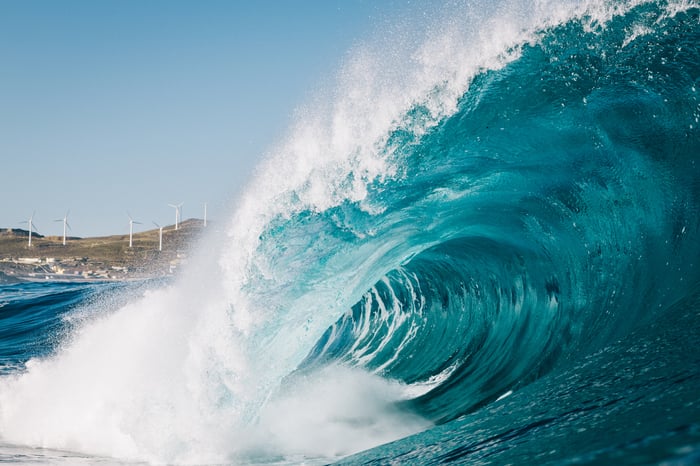 Image source: Getty Images. The location of this awesome picture is Galdar, a town in the north of the island of Gran Canaria, one of Spain's Canary Islands.

Energy Recovery, located in the San Francisco Bay Area, was founded in 1992 and held its initial public offering (IPO) in 2008.

The company's core platform is its pressure-exchanger technology. Using this platform, it invented its first energy-recovery device for seawater desalination plants that use reverse-osmosis technology (SWRO), which is now the technology of choice for desalination operations. The company began selling its initial product in 1997 and has since expanded into related products for desalination facilities.

Last year marked Energy Recovery's fifth consecutive year of generating record revenue in its desalination business. The company attributed this feat to "growing demand for potable water globally, as well as the technological conversion occurring within the industry as thermal desalination plants begin to be decommissioned and replaced with reverse osmosis plants."

Energy Recovery is currently developing several new products based on its pressure-exchanger technology platform and other technologies that can be used for other applications involving liquids and gases. As with its desalination products, the aim of the products it's developing is to make industrial processes more efficient (which equates to cost savings) and environmentally sustainable.

In the company's first-quarter 2021 earnings release, CEO Robert Mao said that he was "particularly excited by our progress developing an energy-recovery device for carbon dioxide (CO2) commercial refrigeration." He added, "The U.S. Environmental Protection Agency just this week [early May] announced an accelerated phase out of HFCs [hydrofluorocarbons], which should hasten adoption of CO2 technology in the U.S. in the coming years. Our testing indicates that our solution excels at saving energy where today's market-leading technology fails -- in warmer climates."

That said, the company's full-year 2021 revenue and earnings are expected to decline from 2020, but there is a good reason: the June 2020 early discontinuation of a 2015 licensing agreement with Schlumberger that gave the oil services giant exclusive use of Energy Recovery's in-development VorTeq hydraulic pumping system. So, Energy Recovery won't generate any licensing revenue from Schlumberger in 2020.

Mao attributed the termination of the agreement to the two companies having "different strategic perspectives as to the path to VorTeq commercialization." Energy Recovery hasn't abandoned pursuing commercialization of this product, though that could occur.

The loss of licensing revenue is just a short-term setback. The company's core desalination business is growing well and should continue to do so. Moreover, the company should have additional revenue sources from new products, though that might be some years away.

Insiders have significant skin in the game, as they own about 13% of the company's shares, according to finviz.com.

Energy Recovery has a solid balance sheet. It ended the first quarter with cash, cash equivalents, and short-term investments of $120 million. It has no debt.