Please ensure Javascript is enabled for purposes of website accessibility
Log In Help Join The Motley Fool
Free Article Join Over 1 Million Premium Members And Get More In-Depth Stock Guidance and Research
By Taylor Weldon - Jun 27, 2021 at 6:20AM

VR gaming accounts for less than 1% of the gaming market, but Facebook is going all in. What does Zuckerberg know that we don't?

According to The Verge, nearly 20% of Facebook's (META -1.01%) employees are working exclusively on virtual reality (VR) and augmented reality (AR). Plus, the company has been acquiring small VR studios for years, most recently BigBox VR (creator of Population: One, the Fortnite of VR) and Unit 2 Games (creator of Craya, a Roblox-esque VR gaming platform), for undisclosed sums.

These continuous investments in talent and studio acquisitions may seem steep for a business segment that accounts for less than 3% of Facebook's top line. But Mark Zuckerberg's ambitious vision for VR is powering a shopping spree that likely won't stop anytime soon. Is Facebook ahead of the game, or will its Oculus VR venture fail to move the needle? 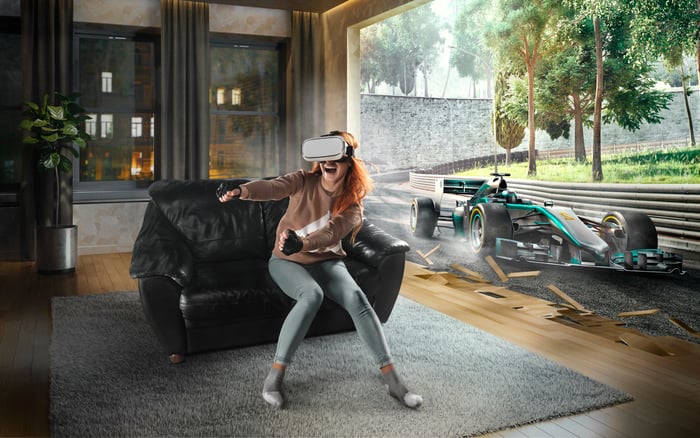 The future of VR gaming

Zuckerberg has been talking up VR more than usual lately, partly thanks to accelerated adoption of the Oculus Quest 2 VR headset (according to Facebook -- but the company does not explicitly report figures for sold VR hardware). The CEO's first major talking point in Facebook's latest earnings report was VR and AR, predicting "augmented and virtual reality to unlock a massive amount of value, both in people's lives and the economy overall."

His excitement about the technology is not unwarranted -- Fortune Business Insights forecasts that the global market for VR gaming will reach $45.2 billion by 2027 (from $5.1 billion in 2019). This translates to a compounded annual growth rate (CAGR) of 31.8%, compared to a CAGR of only 5.3% for the overall gaming console market over the same forecast period.

Facebook's strategy for VR gaming domination starts with laying a solid foundation of technology and developer talent. In classic Facebook fashion, its primary tactic has been acquiring existing VR hardware and software companies.

Since acquiring Oculus VR for $2 billion in 2014, the company has made significant progress in improving its VR hardware to better suit customers' needs. The current Oculus Quest 2 is a stand-alone headset (i.e., no wires to trip on or tangle up while playing) and requires no external device (such as a console or PC). Conversely, Sony's (SONY -1.54%) wired PlayStation VR headset requires a PlayStation console. The Quest 2's wireless, low-hardware conveniences combined with its lower price point relative to any other major headset on the market give Facebook a competitive edge when it comes to hardware.

But even the best VR headset is useless without great games, making Facebook's VR studio acquisitions crucial to building up its VR ecosystem. By acquiring small yet high-performing studios, Facebook is securing revenue from already-popular VR games on Oculus and retaining top software developers to create exclusive content within the Oculus platform. Considering the company's standard four-year stock option vesting schedule, it's unlikely that developers from studios like BigBox or Unit 2 will jump ship to work for a competitor anytime soon.

Why it'll stay ahead

If you know Facebook's business model, you're probably wondering when ads come into play. The company has announced that it will begin testing ads in select games on the Oculus platform, but it's still up in the air what exactly the ad experience will look like once testing begins -- and how VR gamers will react.

If the company can manage to integrate ads without breaking the immersive gaming experience, it will help developers earn more revenue (thus, attracting more developers to the Oculus platform) and could even make games more realistic. For example, real ads appearing on in-game TV screens and billboards would not break players' immersion in their gaming world, while still driving revenue for developers and Facebook.

Beyond attracting developers for top-tier content, Facebook has a unique edge in attracting consumers as well -- its massive social networking user base. No other VR headset can offer such easy accessibility (low price point with no required console purchase) and such a high potential for network effects.

For example, it would be much easier for a friend to influence you to purchase a $300 all-in-one VR headset than a PlayStation console and headset, which would total more than twice the cost of the Quest 2. Don't get me wrong -- Sony is a leading competitor in the VR gaming space and has shipped the most VR hardware units to date, but the company's network effects are arguably limited to existing PlayStation owners (about 15.7 million monthly active users, between the PS4 and the PS5).

Facebook's 2.8 billion monthly active users have much more potential to add value to the Oculus platform by sheer volume of players, especially when it comes to popular social VR games like Population: One, Craya, and Beat Saber Multiplayer (developed by yet another Facebook-acquired studio, Beat Games). Social gaming experiences are inherently more valuable with more players.

While some VR multiplayer games are cross-platform (i.e., an Oculus player can game with a PS VR player), Facebook will likely tighten up its exclusive content offerings to attract and retain players. As long as the company rolls out ad content in a way that feels relatively organic to Oculus players, Facebook is set up for success in rapidly gaining market share in VR gaming.

While Facebook's VR gaming revenue isn't reported explicitly (yet), the company's "other revenue" business segment is primarily Oculus. In Facebook's first-quarter 2021 earnings report, this segment grew 146% year over year to $732 million, implying an impressive growth rate for the company's VR business. Further, the Quest 2 has become the most used VR headset on popular gaming platform Steam, and by many estimates the Quest 2 is selling at least twice as fast as PlayStation VR, despite lagging behind in current overall market share.

Keep an eye on this "other revenue" segment in future earnings reports, as well as any hard figures reported by the company on VR gaming revenue. More cautious investors may also want to wait for Facebook to complete its in-game ad testing process before investing based on the company's growth potential in VR. It is undoubtedly a risk to user growth if ad content is not executed smoothly.

It's impossible to dive into every point in Facebook's value and growth story in one sitting, but the stock seems fairly valued given its growth potential -- FB is even rated "undervalued" by Morningstar. The company's wide economic moat in social gaming is unmatched thanks to a massive user base and vast user data, and these competitive advantages can easily translate to driving profits and market share for its VR gaming business.