It's surprising how much this stock move matters to investors.

U.S. investors are used to focusing on the domestic stock market, where most of the action is. Indeed, many foreign companies list on U.S. exchanges so that they can give American investors easier access to their shares. What many U.S. investors haven't seen before is the positive impact that can result when a foreign company whose shares are already listed in the U.S. decides to do an initial public offering on another country's exchange. On Monday, JinkoSolar (JKS -1.62%) became the latest company to benefit from such a maneuver. 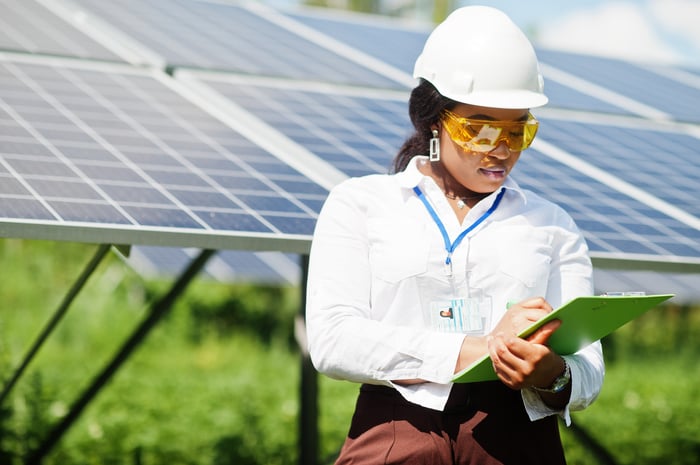 Shining in the sun

Shares of JinkoSolar were trading up by 21% at midday on Monday. That brought its two-day gains to almost 37%, as the solar specialist made investors happy in several different ways.

The gains that JinkoSolar stock saw last week were related primarily to its latest earnings report. Quarterly shipments of solar modules climbed almost 34% year over year, and the company managed to weather declines in revenue and net income reasonably well given the impacts of the global pandemic and economic slowdowns worldwide. Despite some price increases for raw materials that have had an adverse impact on demand, JinkoSolar remains optimistic about the long-term prospects for its business.

On Monday, JinkoSolar said that its primary operating subsidiary had submitted initial documents with the hopes of doing an initial public offering on the Shanghai Sci-Tech innovation board, known as the STAR Market. JinkoSolar expects to issue a maximum of 2.67 billion new shares. The planned sale will represent 10% to 25% of the subsidiary's outstanding shares following the offering. JinkoSolar's stake in the subsidiary will therefore shrink from 73% to roughly 55% after the offering, assuming it sells the maximum number of shares that it's contemplating. The company intends to use the cash generated for the construction of an R&D center and production lines in the Chinese city of Haining.

Current JinkoSolar investors seem pleased to see the company monetizing its stake in its subsidiary, perhaps with the expectation that IPO-related hype will lift share prices more broadly. JinkoSolar has had the plan in place since late last year, and shareholders like that the company is moving forward with it.

Yet JinkoSolar isn't the only company that's benefited from dual-listing news lately. Another is XPeng (XPEV -2.51%). The Chinese electric vehicle manufacturer decided to list its shares first in the U.S., but now, it's looking to raise capital closer to home.

Last week, XPeng announced that it would list its shares on the Hong Kong Stock Exchange. By doing so, it hopes to broaden the funnel on a global effort to raise roughly $2 billion.

XPeng's presence on the Hong Kong exchange will be fairly small. The company expects to make just 4.25 million shares available there -- roughly 5% of what it intends to offer worldwide. The remaining 95% will be aimed at institutional investors globally.

Increasingly, as more foreign companies start doing business globally, investors can expect them to go public in a variety of different forums. Each IPO in a new location won't necessarily warrant a big share-price move higher. However, if those offerings succeed in unlocking new value, investors might start getting used to seeing multiple listings as a net positive for a stock.

This Industry Was Immune to the Stock Market's Monday Mini-Panic