Tailwinds are forming behind the solar industry.

Solar stocks have gone through some big, volatile swings over the past year. But during the past week, they have moved sharply higher in unison. Some of that may stem from momentum trading, but there has been some good news around the industry as well. 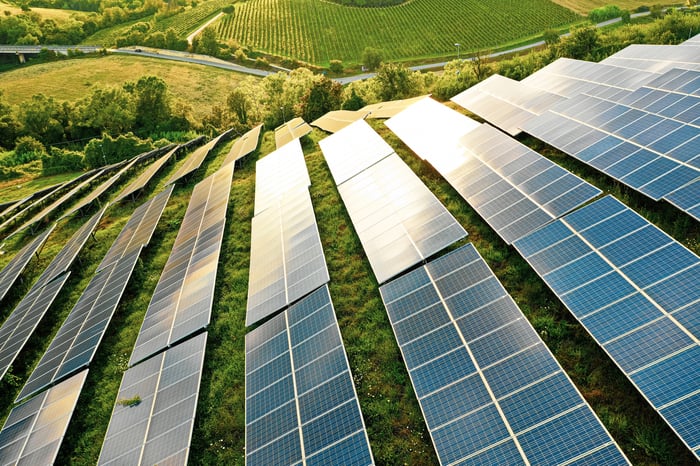 Momentum started last week when Democratic Sen. Jon Ossoff of Georgia introduced legislation that would give tax credits to manufacturers throughout the solar energy supply chain. The idea of giving incentives to onshore solar manufacturing has gotten more support in Washington than some observers may have expected.

The impact this bill would have on the solar industry if it becomes law isn't 100% clear right now, but manufacturers would likely be the first beneficiaries. That would help explain why Canadian Solar and Enphase are up -- they are market-leaders in their niches. Early reporting from PV Magazine says that under the proposed legislation, solar modules would get a credit of 11 cents per watt, cells would get 4 cents, wafers would get $12 per square meter, and polysilicon could get $3 per kilogram. Those are generous initial numbers, though, so it's reasonable to expect that negotiations in Congress could dial them back.

Downstream, some cost savings from U.S. manufacturing could be passed on to developers like ReneSola and SunPower, although the real benefit that this bill might have for them is simply that it would help solar energy become cheaper and more popular in the U.S.

There's no knowing yet precisely what this legislation will look like by the time it reaches key votes in Congress -- assuming it gets that far. And even if it does, the bill may not pass. So, for now, investors should base their decisions on the idea that it'll be business as usual for solar companies -- with a possible nudge of tax help on the horizon.

The other factor that was helping solar energy stocks Monday was that interest rates declined further. The yield on the 10-year U.S. Treasury fell by 5 basis points to 1.48%. Lower interest rates help solar developers by lowering their cost of capital, which allows them to cut the prices they charge for electricity, increase their margins, or both. It was most likely those lower interest rates that provided the largest boost to SunPower and ReneSola on Monday.

An environmentally friendly atmosphere in Washington was a major reason why solar energy stocks rose late last year and early in 2021. Now, it looks like the industry's hopes for some federal support are starting to turn into legislative proposals that have at least some chance of passing.

Bond yields rose notably in the past year, but they've edged lower in recent months, which helps solar companies. If rates remain low and the costs to end-users come down with the help of tax incentives, it could create a new boom in the U.S. solar industry. And that's what investors were reacting to Monday.