Please ensure Javascript is enabled for purposes of website accessibility
Log In Help Join The Motley Fool
Free Article Join Over 1 Million Premium Members And Get More In-Depth Stock Guidance and Research
By David Jagielski – Jun 29, 2021 at 5:49AM

These investments offer investors a good mix of value and growth.

Buying shares of top tech stocks Facebook, Apple, Amazon, Netflix, and Alphabet (Google) -- otherwise known as FAANG -- would have earned great returns in the past. But now, with their valuations creeping up and the cheapest of those stocks (Apple and Facebook) trading at a forward price-to-earnings (P/E) multiple of more than 26, they aren't as promising when compared to other growth stocks.

If you are looking to make the most of your investment dollars, you should consider buying shares of Pfizer (PFE -0.61%), Oracle (ORCL -2.65%), and UPS (UPS -1.08%) instead of FAANG. They have strong, growing businesses and they are much cheaper buys. 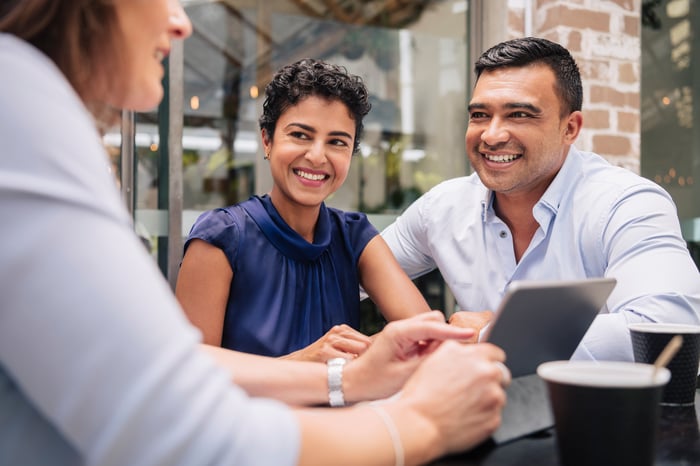 Healthcare giant Pfizer is trading at just 10 times its future earnings. The company has lately become smaller but more growth-oriented after the November 2020 spinoff of its Upjohn business with Mylan to form what is now Viatris. That said, Upjohn wasn't a significant growth driver for Pfizer. In the most recent full quarter during which it was part of Pfizer's business, for the period ending Sept. 27, its quarterly revenue of $1.9 billion was down 19% year over year. By comparison, its biopharmaceutical segment, which will remain part of its operations, generated over $10 billion in sales and was up 3% from the prior-year period.

And thanks to its COVID-19 vaccine, Pfizer is on track for a stellar year. The company projects that it will generate $26 billion in sales from its vaccine this year, and its top line should come in between $70.5 billion and $72.5 billion. In 2020, its sales were just under $42 billion.

While investors may be concerned that vaccine sales will be short-lived, the World Health Organization believes people may require booster shots on an annual basis -- especially the most vulnerable. And to make that even easier, Pfizer is also working on an oral drug for COVID-19 that people can take at home. If all goes well in trials, it could be ready before the end of this year.

Between the strong vaccine sales and Pfizer focusing on developing new drugs and being a leaner organization, the company has become a much more attractive growth stock, and it is a bargain compared to what you would be getting by investing in FAANG.

Not all tech stocks are overpriced, and Oracle is a great example of that. At a forward P/E of 17, it's pricier than Pfizer but still a cheaper buy than any of the FAANG stocks. The company offers businesses an array of cloud-based computing solutions, including networking, analytics, storage, and application development.

When Oracle released its fourth-quarter earnings June 15, both its sales and profits came in above analyst expectations. Revenue of more than $11 billion for the period ending May 31 grew by 8% year over year, while profits totaling $4 billion were up 29%. CEO Safra Catz is bullish on the future of the cloud business, saying that the company is going to double its capital spend on the cloud to nearly $4 billion in the new fiscal year.

The tech company has enjoyed strong profits with net margins of at least 25% in each of the past three fiscal years. And by making bigger investments in the cloud and looking for ways to add value for businesses that are utilizing more resources online, Oracle could be heading for some terrific growth opportunities. Its modest price tag makes it an even better buy.

Investing in logistics is another great move if you are seeking out growth. Amid the pandemic, people have been buying more goods online as many stores were closed for in-person shopping. And some of those habits and conveniences are going to be tough to break post-pandemic, especially when a company like Amazon makes it all too easy to order something with just the click of a button. Whether it is Amazon, Etsy, or some other portal, the growth in online shopping and logistics is promising -- estimates from Grand View Research have the third-party logistics market growing at a compound annual rate of 8.5% from now until 2028, when it will reach a value of nearly $1.7 trillion.

Things have already been off to a great start in 2021, with UPS's revenue of $23 billion for the first three months of this year up an impressive 27% over the same period in 2020. Its operating profit of $2.8 billion was more than double the $1.1 billion it posted a year ago. By 2023, the company projects that it could top $100 billion in revenue. That would be about 18% higher than the $85 billion in sales it posted for 2020.

UPS trades at a forward P/E of just under 19, making it the priciest stock on this list but still cheaper than investors are paying for FAANG stocks today. With some solid long-term growth ahead, it's still not too late to invest in UPS and take advantage of some strong growth prospects in the logistics industry.