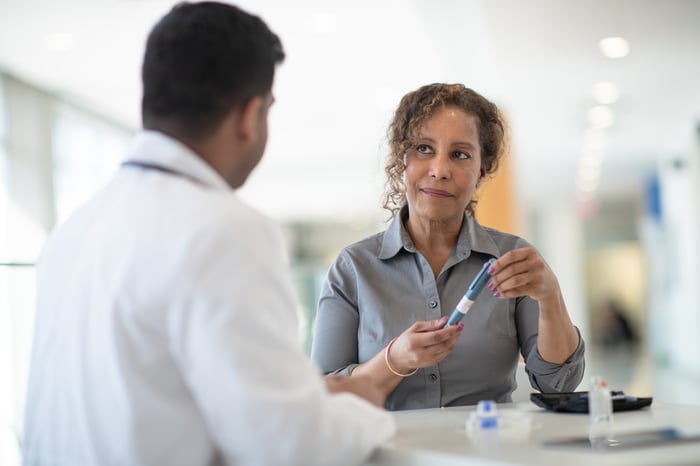 Leading the Dow higher today are shares of mega-retailer Walmart, which announced on June 29 it had partnered with Novo Nordisk to offer a Walmart-branded insulin and injection device under the ReliOn brand name. The company is flexing its scale to offer this product at a significant discount. It will price insulin at $72.88 per vial and its FlexPen injector at $85.88, a discount it claims is between 58% and 75% lower than the cash price of competing insulin products currently available.

Diabetes is an expensive health condition to manage. According to the CEO of the American Diabetes Association, quoted in Walmart's press release, medical care related to diabetes costs an estimated $7,000 per year on average. Despite the cost, managing diabetes is a growing business. With its massive retail footprint and changing demographics leading to an increase in the number of Americans with diabetes, Walmart's scale could play a crucial role in helping it win significant market share. 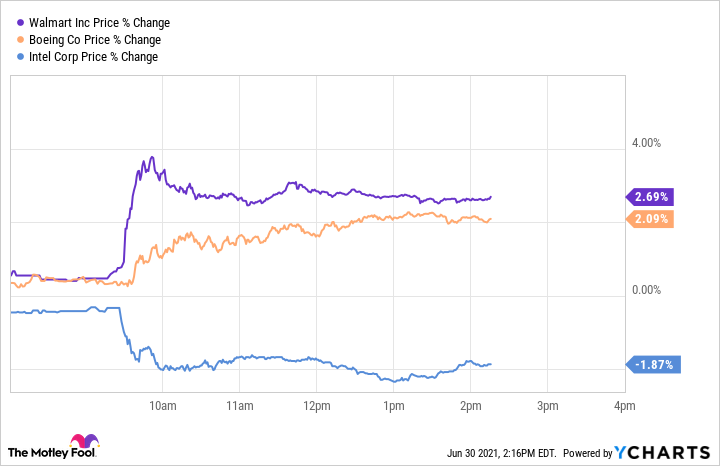 After steadily shrinking over the past year, orders of Boeing's 737 MAX aircraft have finally started to grow again. And you can now add United Airlines to the list of air lines signing big orders for the aircraft. According to the deal, United accelerated delivery for dozens of orders already in place and ordered another 200 737 MAX for future delivery.

While the announcement came out on June 29, it's been expected for quite some time, and Boeing stock actually fell yesterday. News about the Delta variant of the novel coronavirus and the potential return to lockdowns in response to a surge in cases may have overshadowed confirmation of United's big order. Investors likely sold in fear that a return to lockdowns could undo the recovery in air travel.

What's still unclear is how much economic value this deal will deliver for Boeing. Adding hundreds of new orders to its backlog is great news for the company, but it is likely that United is receiving a significant discount with this large order.

Intel's stock is on track to fall close to 2% today after a company blog post disclosed that it was delaying production of its Sapphire Rapids server chips to 2022. Sapphire Rapids had been expected to start rolling out of Intel's manufacturing facilities later this year.

This is the first big setback for the semiconductor giant since Pat Gelsinger took the reins as CEO in February. Gelsinger has announced an aggressive plan to turn the company around by expanding its global manufacturing footprint, shifting away from its proprietary focus, and becoming more closely aligned with companies looking to design their own chips.

Intel's delay in producing its 7-nanometer microprocessors has put the company at a serious performance disadvantage in relation to some of its peers. Though not as publicized, this latest delay impacts the company's hugely important -- and hugely profitable -- server business. While Gelsinger may have some great plans to turn Intel around, the hard part -- actually executing on those plans -- has only just begun.

These 2 Comeback Stocks Are Leading the Nasdaq Higher Today