Please ensure Javascript is enabled for purposes of website accessibility
Log In Help Join The Motley Fool
Free Article Join Over 1 Million Premium Members And Get More In-Depth Stock Guidance and Research
By James Brumley - Jun 30, 2021 at 8:41AM

Their survival doesn't necessarily mean movie theater stocks will continue to rally as some have of late.

In typical Hollywood fashion, a hero has swooped in to save the nation's beleaguered movie theaters from certain doom. Universal's newest action flick, F9: The Fast Saga (the ninth installment of the Fast and Furious series), just gave theater chains a much-needed shot in the arm. As AMC Entertainment Holdings (AMC -13.91%) CEO Adam Aron put it, "The big screen is back! [...] At AMC, we salute our friends and partners at Universal Pictures following their post-reopening record-setting performance of F9: The Fast Saga." Presumably, rival theater chains Cinemark Holdings (CNK -2.33%) and Cineworld Group (CNNW.F -46.74%) saw a similar business bump.

Is it hyperbole? Aron has something of a penchant for splashy talk. His optimism also ignores the possibility that consumers are ready to do anything that looks and feels like the pre-pandemic norm; F9 may have simply been the first opportunity to do so. There's no assurance this high interest in the actual theater experience will last. On balance, though, this is something the cinema side of the business can build on.

Of course, that doesn't necessarily mean movie theater stocks are all buys.

Better, but still not great

As the old saying goes, a picture is worth a thousand words.

Take a look. Last weekend's domestic box office take of nearly $98 million is the best regular (three-day) weekend the film industry has seen since the pandemic took hold in March 2020, according to numbers from Box Office Mojo. 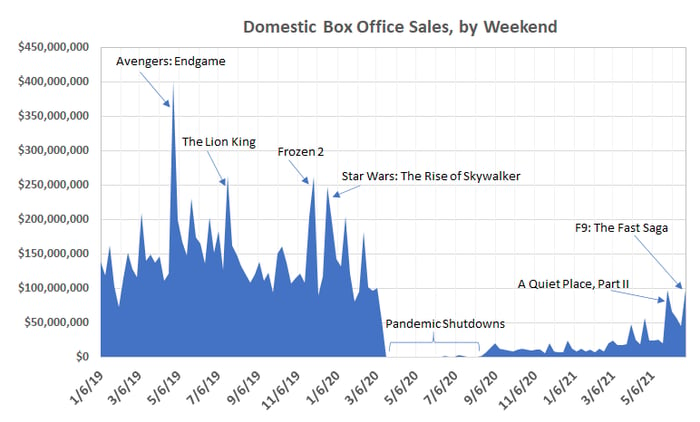 There's no denying that demand for theatrical films isn't what it was before COVID-19 took hold. Before the pandemic, average weekend film ticket sales were reliably between $140 million and $180 million. Last weekend was almost half of the typical number, and might have been notably weaker were it not for F9's reported $70 million haul.

There's a major footnote to add to the matter. Studios like AT&T's Warner Bros. and Comcast's (CMCSA -2.73%) Universal are reticent to release new films until the coronavirus contagion is clearly in the rearview mirror. Some are also distributing new movies through streaming platforms. The thing is, theaters can't make a full recovery unless studios are willing to take the risk of releasing new flicks for the big screen. Chicken, egg.

It's a victory for Cinemark, Cineworld, and AMC, to be sure. But one good weekend isn't enough to declare movie theaters officially out of trouble. As was noted, consumers may have simply been primed for any sort of fresh entertainment... particularly indoor entertainment, as a heat wave rips across the country.

Perhaps the biggest takeaway is that -- at least this time around -- it took a major, splashy title like another Fast and Furious entry to draw a crowd to theaters. 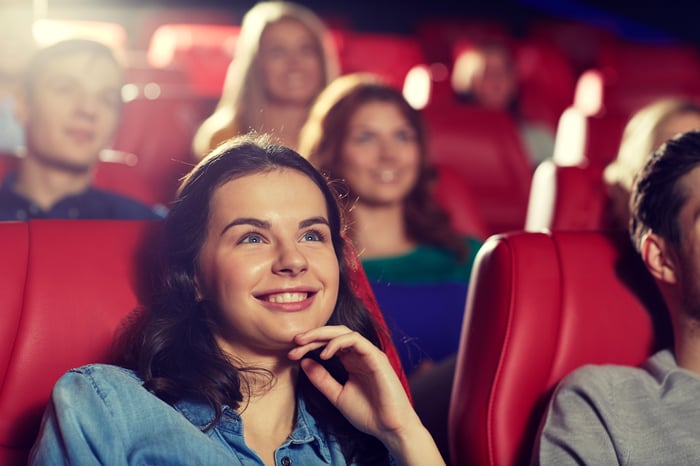 The idea began circulating last year. In the new normal of a post-pandemic world, studios might limit their theatrical releases to films that have to be seen in theaters to be fully appreciated. The rest can go straight to streaming, and some of it certainly will. Indeed, some of it already is bypassing theaters and used to populate streaming platforms' selection. Given this lack of blockbuster content, it's unlikely that domestic box office levels will ever reach their inflation-adjusted peaks. The theatrical film business has been shrinking for years now.

Even if the nation's movie theaters make a full recovery to pre-pandemic levels of demand, however, AMC's shares remain outrageously overvalued, trading at 267 times the company's 2017 best-ever full-year net income of $112 million. Operating profits and operating cash flow were topping out before the pandemic took hold, too, as debt linked to acquisition-driven growth failed to pay for itself.

Bottom line? The glimmer of hope sparked by F9's success suggests the movie theater business can survive. Given AMC's already rich premium against so many lingering unknowns, though, it's still difficult to see shares staying at their elevated prices.