Please ensure Javascript is enabled for purposes of website accessibility
Log In Help Join The Motley Fool
Free Article Join Over 1 Million Premium Members And Get More In-Depth Stock Guidance and Research
By Rich Duprey – Jun 30, 2021 at 6:55AM

This new IPO is growing fast and is profitable, but has its valuation already gotten ahead of the business?

Breaking Bad's Walter White might have found a car wash to be an effective way to launder ill-gotten gains from operating a meth lab, but there is no logical reason the market should be valuing a legitimate car wash chain at over $6 billion.

To put that in perspective, the car wash operator is worth more than Clean Energy Fuels, GoPro, and Smith & Wesson Brands combined. So let's see if this car wash chain deserves this ultra-unicorn price. 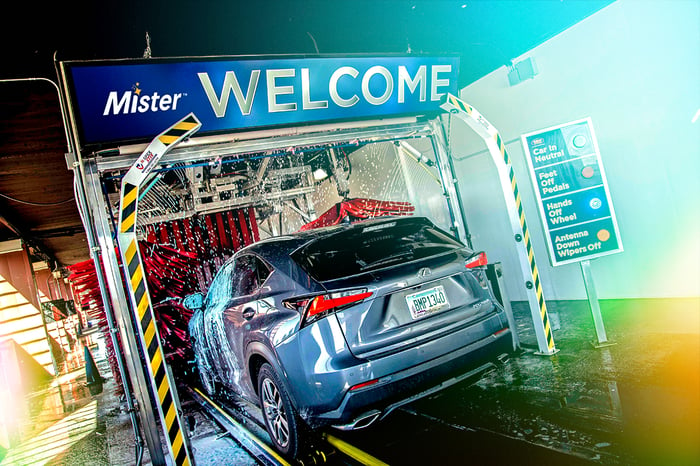 A new sheen to the business

It offered 37.5 million shares at $15 per share, the bottom of its expected range, though it cleaned up with a 35% gain on its debut, closing its first day of trading above $20 per share.

The IPO raised about $600 million for the company, which used most of the proceeds to pay down a good portion of its more than $1 billion worth of debt. It now starts life as a publicly traded stock with a much more manageable $465 million in obligations.

The company is backed by private equity firm Leonard Green & Partners, which remains a majority shareholder, though the exact percentage it now holds following the offering was not identified in its SEC filings.

Get them coming back for more

Business has been good for Mister Car Wash, which was growing revenue at a compound rate of 20% annually before the COVID-19 pandemic struck. Even so, it was still able to add nearly a quarter million new customers to its Unlimited Wash Club (UWC) in 2020.

UWC is the car wash chain's monthly member loyalty program, which ended the first quarter with some 1.4 million members. It's key to Mister Car Wash's growth because UWC members represent 62% of the chain's car wash sales and 70% of its volume.

For a flat monthly fee, members are offered an unlimited number of car washes, and Mister Car Wash has found its members wash their cars on average 30 times a year, far more than the typical car owner does.

Between 2010 and 2020, the UWC has grown its membership at a 42% compound annual growth rate, making it essential to the company's future. CEO John Lai says the UWC has been transformative, helping it report net revenue of $595 million for fiscal 2020. While that was down 9% from the prior year due to temporarily closing its locations because of the pandemic, this year's first-quarter revenue of $175.5 million was up 13% from last year, and the car wash earned $25 million in profits, almost triple the year-ago amount.

An opportunity for more growth

The car industry is highly fragmented, marked mostly by independent operators. There are a few chains, including one with ties to Procter & Gamble, though it has fewer than two dozen locations in the Southeast and licenses the Mr. Clean brand to it.

While the strategy is responsible for 22 of its new locations since 2018, Mister Car Wash intends to have them represent the primary growth opportunity going forward. It expects to open between 16 to 18 greenfield locations this year alone.

Because its average capital expenditures, net of sale-leaseback financing, are approximately $1.8 million per location, it says it is able to achieve a three-year pay-back period.

The car wash business has been a profitable one for Mister Car Wash, even during the pandemic, and it seems to have found a way to generate good cash flows from the repeatable model. However, all of its potential and then some seems to be priced into the stock.

At a $6 billion valuation, it is trading at over 10 times sales, 80 times earnings, and 100 times the free cash flow it produces. There's a price at which Mister Car Wash could be a buy, but it's dramatically lower than where it is today.