Please ensure Javascript is enabled for purposes of website accessibility
Log In Help Join The Motley Fool
Free Article Join Over 1 Million Premium Members And Get More In-Depth Stock Guidance and Research
By Dan Caplinger - Jun 30, 2021 at 5:55AM

NVIDIA's recent announcement could open the floodgates for more companies to step forward.

Stock splits play a strange role in investing. On their face, they have no effect whatsoever on a company's value -- they simply change the number of outstanding shares a company has. Yet most investors take stock splits as highly encouraging. Witness the recent hype over NVIDIA's (NVDA 2.39%) decision to split its stock, and you'll get a sense of how much attention companies get when they make these moves.

NVIDIA's move came years after its previous stock split, and there are plenty of stocks that have gone a long time without taking such action. In fact, many companies have never split their stock, and I won't speculate here about whether some of those high-flying leaders will change their minds now. But among stocks that have a history of past splits, a few in particular stand out as being ready to make a move soon. 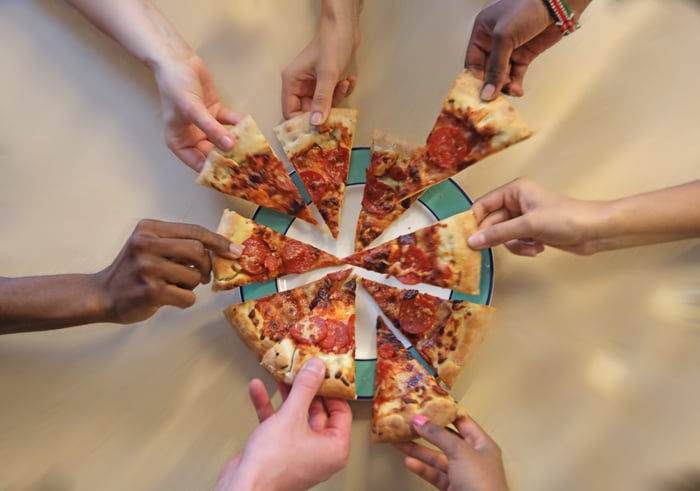 Microsoft (MSFT -0.40%) just hit a major milestone, rising above the $2 trillion mark in market capitalization. It became just the second U.S. stock to reach that level.

Microsoft used to split its stock regularly, but its share price got stuck in the doldrums for a long time following the tech bust in the early 2000s. It took Microsoft roughly 15 years to return to all-time highs after the decline, and it wasn't until early 2019 that the share price climbed above the $100 mark for good. Now, the stock fetches about $270 per share.

Historically, Microsoft has tended to do stock splits when its share price moved to between $150 and $200 per share. While many companies have moved away from frequent splits over the past 20 years, it's not surprising to see Microsoft having chosen to wait this time around. However, Microsoft is a Dow component, and its stock price determines its influence in the price-weighted index. With Microsoft having about double the influence of the larger Apple (AAPL -0.23%), there's definitely some appeal to a 2-for-1 split that would put the two tech giants on more of an even keel within the Dow.

In 2017, robotic surgery company Intuitive Surgical (ISRG -0.05%) did something that had fallen out of favor when it made its own 3-for-1 stock split. The split didn't entirely lead to a huge run of similar moves from other companies, but it did mark somewhat of a turning point as far as company perception of stock splits was concerned.

Intuitive Surgical came up with a novel reason for its stock split four years ago. In addition to the usual comments about making share prices more affordable for retail investors, the company added that it was useful to be more precise in awarding stock-based compensation to employees. As prices rose, it was harder to dole out stock or options awards effectively. The same might well be happening now, as Intuitive has recovered strongly from weak industry conditions and rewarded long-term investors handsomely.

The last split from Intuitive Surgical came as the stock was approaching the $1,000 mark. With shares now fetching more than $900 per share, the same reasons for splitting appear to apply today.

Finally, Netflix (NFLX 1.67%) rounds out this list of potential stock split candidates. With a price at around $530 per share, the stock isn't quite at levels that have led to past splits. However, it wouldn't be unreasonable for the streaming video giant to move forward with a split at current prices.

Netflix's most recent stock split came in 2015. The 7-for-1 split came as Netflix had rocketed past the $700 per share mark, and it proved to be one of multiple 7-for-1 splits that seemed to come into vogue in the mid-2010s.

Fundamentally, Netflix's business is strong enough to support another split. Subscriptions soared in 2020, and the company could well be in position to boost its monthly subscription prices once again in the near future. Even with competition getting fierce in streaming video, Netflix has held its own with its wide selection of original and third-party content and its first-mover advantage.

It might take another leg up to motivate Netflix to do a stock split. However, that upward movement could come sooner than many think.

Investors like the short-term bump that often comes when a company announces a stock split. Just remember that split announcements don't have any true effect on a stock's value, and it'll leave you thinking about stock splits more as a sign of business optimism than as anything particularly meaningful about a stock.

How to Increase Your Dividend Income Without Lifting a Finger